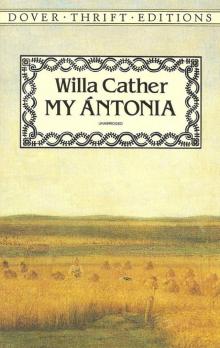 LAST summer I happened to be crossing the plains of Iowa in a seasonof intense heat, and it was my good fortune to have for a travelingcompanion James Quayle Burden--Jim Burden, as we still call him in theWest. He and I are old friends--we grew up together in the same Nebraskatown--and we had much to say to each other. While the train flashedthrough never-ending miles of ripe wheat, by country towns andbright-flowered pastures and oak groves wilting in the sun, we sat inthe observation car, where the woodwork was hot to the touch and reddust lay deep over everything. The dust and heat, the burning wind,reminded us of many things. We were talking about what it is like tospend one's childhood in little towns like these, buried in wheat andcorn, under stimulating extremes of climate: burning summers when theworld lies green and billowy beneath a brilliant sky, when one is fairlystifled in vegetation, in the color and smell of strong weeds and heavyharvests; blustery winters with little snow, when the whole country isstripped bare and gray as sheet-iron. We agreed that no one who had notgrown up in a little prairie town could know anything about it. It was akind of freemasonry, we said.

Although Jim Burden and I both live in New York, and are old friends, Ido not see much of him there. He is legal counsel for one of the greatWestern railways, and is sometimes away from his New York office forweeks together. That is one reason why we do not often meet. Another isthat I do not like his wife.

When Jim was still an obscure young lawyer, struggling to make his wayin New York, his career was suddenly advanced by a brilliant marriage.Genevieve Whitney was the only daughter of a distinguished man. Hermarriage with young Burden was the subject of sharp comment at the time.It was said she had been brutally jilted by her cousin, Rutland Whitney,and that she married this unknown man from the West out of bravado. Shewas a restless, headstrong girl, even then, who liked to astonishher friends. Later, when I knew her, she was always doing somethingunexpected. She gave one of her town houses for a Suffrage headquarters,produced one of her own plays at the Princess Theater, was arrestedfor picketing during a garment-makers' strike, etc. I am never able tobelieve that she has much feeling for the causes to which she lends hername and her fleeting interest. She is handsome, energetic, executive,but to me she seems unimpressionable and temperamentally incapable ofenthusiasm. Her husband's quiet tastes irritate her, I think, and shefinds it worth while to play the patroness to a group of young poets andpainters of advanced ideas and mediocre ability. She has her own fortuneand lives her own life. For some reason, she wishes to remain Mrs. JamesBurden.

As for Jim, no disappointments have been severe enough to chill hisnaturally romantic and ardent disposition. This disposition, though itoften made him seem very funny when he was a boy, has been one of thestrongest elements in his success. He loves with a personal passion thegreat country through which his railway runs and branches. His faithin it and his knowledge of it have played an important part in itsdevelopment. He is always able to raise capital for new enterprises inWyoming or Montana, and has helped young men out there to do remarkablethings in mines and timber and oil. If a young man with an idea can onceget Jim Burden's attention, can manage to accompany him when he goes offinto the wilds hunting for lost parks or exploring new canyons, then themoney which means action is usually forthcoming. Jim is still able tolose himself in those big Western dreams. Though he is over forty now,he meets new people and new enterprises with the impulsiveness by whichhis boyhood friends remember him. He never seems to me to grow older.His fresh color and sandy hair and quick-changing blue eyes are thoseof a young man, and his sympathetic, solicitous interest in women is asyouthful as it is Western and American.

During that burning day when we were crossing Iowa, our talk keptreturning to a central figure, a Bohemian girl whom we had knownlong ago and whom both of us admired. More than any other person weremembered, this girl seemed to mean to us the country, the conditions,the whole adventure of our childhood. To speak her name was to callup pictures of people and places, to set a quiet drama going in one'sbrain. I had lost sight of her altogether, but Jim had found her againafter long years, had renewed a friendship that meant a great deal tohim, and out of his busy life had set apart time enough to enjoy thatfriendship. His mind was full of her that day. He made me see her again,feel her presence, revived all my old affection for her.

"I can't see," he said impetuously, "why you have never written anythingabout Antonia."

I told him I had always felt that other people--he himself, for one knewher much better than I. I was ready, however, to make an agreement withhim; I would set down on paper all that I remembered of Antonia if hewould do the same. We might, in this way, get a picture of her.

He rumpled his hair with a quick, excited gesture, which with him oftenannounces a new determination, and I could see that my suggestion tookhold of him. "Maybe I will, maybe I will!" he declared. He stared outof the window for a few moments, and when he turned to me again his eyeshad the sudden clearness that comes from something the mind itself sees."Of course," he said, "I should have to do it in a direct way, and saya great deal about myself. It's through myself that I knew and felt her,and I've had no practice in any other form of presentation."

I told him that how he knew her and felt her was exactly what I mostwanted to know about Antonia. He had had opportunities that I, as alittle girl who watched her come and go, had not.

Months afterward Jim Burden arrived at my apartment one stormy winterafternoon, with a bulging legal portfolio sheltered under his furovercoat. He brought it into the sitting-room with him and tapped itwith some pride as he stood warming his hands.

"I finished it last night--the thing about Antonia," he said. "Now, whatabout yours?"

I had to confess that mine had not gone beyond a few straggling notes.

"Notes? I didn't make any." He drank his tea all at once and put downthe cup. "I didn't arrange or rearrange. I simply wrote down what ofherself and myself and other people Antonia's name recalls to me. Isuppose it hasn't any form. It hasn't any title, either." He went intothe next room, sat down at my desk and wrote on the pinkish face ofthe portfolio the word, "Antonia." He frowned at this a moment, thenprefixed another word, making it "My Antonia." That seemed to satisfyhim.

"Read it as soon as you can," he said, rising, "but don't let itinfluence your own story."

My own story was never written, but the following narrative is Jim'smanuscript, substantially as he brought it to me.

NOTE: The Bohemian name Antonia is strongly accented on the firstsyllable, like the English name Anthony, and the 'i' is, of course,given the sound of long 'e'. The name is pronounced An'-ton-ee-ah.