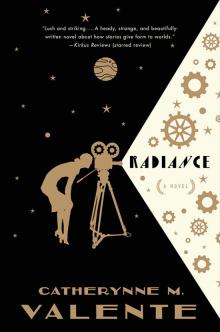 In the Night Garden

In the Cities of Coin and Spice

The Dirge for Prester John: The Habitation of the Blessed

The Dirge for Prester John: The Folded World

The Girl Who Circumnavigated Fairyland

in a Ship of Her Own Making

The Girl Who Fell Beneath Fairyland

and Led the Revels There

The Girl Who Soared Over Fairyland

and Cut the Moon in Two

This is a work of fiction. All of the characters, organizations, and events portrayed in this novel are either products of the author’s imagination or are used fictitiously.

Cover art and design by Will Staehle

Tor® is a registered trademark of Tom Doherty Associates, LLC.

The Library of Congress Cataloging-in-Publication Data is available upon request.

Our e-books may be purchased in bulk for promotional, educational, or business use. Please contact the Macmillan Corporate and Premium Sales Department at (800) 221-7945, extension 5442, or by e-mail at [email protected]

PART ONE - THE WHITE PAGES

I Left My Sugar Standing in the Rain

How Many Miles to Babylon?: Episode 764

The Deep Blue Devil: The Dame in Question

And the Sea Remembered, Suddenly

Look at Her Face

How Many Miles to Babylon?: Episode 1

The Murder of Gonzago

The Land of Milk and Desire

The Famine Queen of Phobos

The House, the Eye, and the Whale

And If She’s Not Gone, She Lives There Still

And If She’s Not Gone, She Lives There Still:

The Case of the Disappearing Documentarian

How Many Miles to Babylon?: Episode 974

And If She’s Not Gone, She Lives There Still:

The Case of the Reappearing Raconteur

The Man of the Hours

The Howler and the Lord of the World

For Heath, who taught me about light

and my father, who taught me how to get the shot

(Some dates are approximate due to known issues with reconciling standard and sub-light transit calendars.)

1858: Conrad Wernyhora and Carlotta Xanthea launch the Tree of Knowledge from the Hawaiian islands, Earth

1902: Proserpine, an American colony on Pluto, is destroyed. Cause unknown.

24 March 1914: First episode of How Many Miles to Babylon? broadcast throughout the inner Solar System

29 October 1914: Severin born in the Lunar city of Tithonus

1917: Enyo, a Russian mining settlement on Mars, is destroyed. Cause unknown.

1939: The Stone in Swaddling Clothes departs for the Outer System

1940: Fifth Venusian census, the last to record the village of Adonis

Spring 1959: Posthumous publication of Erasmo St. John’s book The Sound of a Voice That Is Still

Summer 1961: Major rewrite on Doctor Callow’s Dream, retitled And if She’s Not Gone, She Lives There Still (dir. Percival Unck)

December 1961–October 1962: The action of The Deep Blue Devil The Man in the Malachite Mask Doctor Callow’s Dream And If She’s Not Gone, She Lives There Still takes place

Being unable to retrace our steps in Time, we decided to move forward in Space. Shall we never be able to glide back up the stream of Time, and peep into the old home, and gaze on the old faces? Perhaps when the phonograph and the kinesigraph are perfected, and some future worker has solved the problem of colour photography, our descendants will be able to deceive themselves with something very like it: but it will be but a barren husk, a soulless phantasm and nothing more. “Oh for the touch of a vanished hand, and the sound of a voice that is still!”

inventor of the kinesigraph camera

Light makes photography. Embrace light. Admire it. Love it. But above all, know light. Know it for all you are worth, and you will know the key to photography.

Talking pictures are like lip rouge on the Venus de Milo.

Come inside and meet the prologue.

It is dark inside the prologue. Dark and cool and welcoming. Whatever is to come, the prologue welcomes you absolutely, accepts you unconditionally, receives you graciously, providing all that is necessary to endure the rest. The prologue is patient. She has been told often that she is wholly unnecessary, a growth upon the story that the wise doctor must cut off. She has time and again found the doors to more fashionable establishments closed to her, while tables are set with candles and crystal for a top-hatted in medias res, a pedigreed murder at midnight, a well-heeled musical number. This does not trouble the prologue. She was fashionable when plays still began with sacrifices—and if you catch her in her cups, she will tell you that any show that jumps into the action without a brace of heifers burning centre front still strikes her as a rather tawdry affair. The prologue is the mother of the tale and the governess of the audience. She knows you have to bring them in slow, teach them how to behave. All it takes is a little music; a soft play of lights; a flash of skin; a good, beefy monologue to bring everyone up to speed before you expect them to give a witch’s third tit who’s king of Scotland.

The prologue is where you take your coats off. Relax. Leave your shoes at the door. Invoke the muse, call down whatever royal flush of gods you want pulling the action between them. O Muse, O Goddess. Sing, Speak, Weep. Give unto me the song of rage. Hand over the arms and the man on the double-quick. Hit that horn and play me the voice of the many-minded traveller who could not get home. Keep a front-row seat for that masked demiurge, a plum spot for that jazzy old Word in the Void, or let it be on your head.

So come in. Let your eyes adjust. We need your eyes. Let the chartreuse pop of the sun’s afterimage fade into the blackness we have thoughtfully provided. The floor creaks underfoot: slick, yielding wood, green as an olive in a martini, fresh from the forests of Ganymede. You can smell it lightly, under the lime polish. Ashes and copper. Let the dark scoop your ears clean, scrub out the bubbling champagne-cacophony of the world you have only just left behind. We need your ears. And we want your hands as well. We are all primates, after all. We love to touch; we love to interfere with objects. Nothing is real until you can touch it. Your sight will sharpen in time; the shadows will lift and separate like curtains. You will find pages under your eager fingers: pages, phonographs, objects great and small but mostly small, resting on pillars of Uranian saltrock carved into cresting, foam-gnarled waves, trusting their flotsam to your keeping.

Come in, come in, there is so much to see.

No sitting down, though. We need you standing. There’s a projector here, just there—have a care, sir—to your right. Another—mind your hems, madam—to your left. But you will find no screen. You’re it. If you’ll gather in…yes, just so, all in a row like good little daisies. Tall folk to the rear, small folk up front. Now, if you are comfortable, we can begin.

This is a story about seeing. This is a story about being seen. All else is subservient. The ears assist; the hands comfort. The only verbs that matter are verbs of vision: look, see, watch, observe. Gaze. Behold. Witness. The eye is our master, and the eye worships light. That which makes light is good, that which takes it is to be feared. We have taken it from you, but we will give it back again. Make of that what you will.

God—if you will forgive such sweeping pronouncements so early in our acquaintance—is an eye.

It would be better if you would consent to disrobe. Skin is the most intimate and perfect of screens. But having come from so many ports and climes, we do not expect your taboos concerning modesty to match up perfectly with ours—why, thank you, miss, you are most kind. And sir, we are greatly obliged. The matron seems to be having some trouble with her costume; if you could assist her, young lady? Thank you. You have all proven yourselves wonderfully gracious and liberal-minded. You are an audience we do not deserve. Perhaps it is a relief after the
heat to shed silk and leathers? Nevertheless, we are thoroughly impressed. We shall endeavour to make ourselves equally naked, equally bare, equally vulnerable to iris and pupil, whose bites are ever so much fiercer than teeth.

The clatter and whirr of the projectors pick up like wind across a long desert. Look down. You can see a woman with dark hair and unhappy eyes moving silently on your bellies, your breasts, your thighs, your feet. Upside down, shorn of colour, flickering. Bent and cut up by the curves of your bodies and the age of the film. You see her as you see anyone in this world: distorted, warped, reflected, refracted, contorted, mutilated by time.

Observe: It is daytime in the movie on your chest. The crew is setting up the morning’s shoot. The director of photography, a great, broad-chested fellow with a smart moustache, shaves in a mirror nailed to a cacao-tree. The looking glass hangs at a rakish angle, half-sunk into furry black bark. You will know by the tree that he stands upon the surface of Venus, not far from the sea. It is late summer. A spot of rain glimmers on the lens.

Yes, my dear fellow, you know his name, too. You are just awfully clever.

The DP uses a straight razor inlaid with a scrimshaw of fossilized kelp. You will find it along the east wall. Do not be afraid; it has not dreamed of sharpness since its profligate youth. The blade belonged to his grandfather, a merchant sailor who played the bassoon—a most impractical instrument for a seaman, but how the old man loved his pipe! The scrimshaw shows a sea serpent, each scale lovingly etched, as round as fingernails. The director of photography is shirtless, his skin as dark as unshot film, his face angular and broad. He catches a glimpse of the woman in his mirror and whirls round to catch her up. He kisses her with a resounding smack you cannot hear, smearing shaving cream on her face. She laughs noiselessly and punches his arm; he recoils in mock agony. It is a pleasant scene. Some phantom discontentment pops like a flashbulb in her eyes and obliterates itself into love.