Goddess of the Hunt, p.1 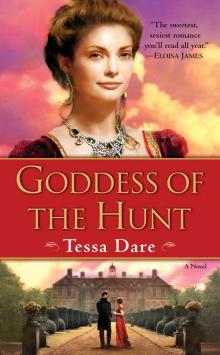 A knock on the door in the dead of night could only mean disaster.

Jeremy pulled a pair of worn breeches on under his nightshirt and stumbled toward the bedchamber door. A fire? He didn’t smell smoke. Perhaps a Waltham family emergency? An urgent message from his steward, maybe—unrest at Corbinsdale would not come as a surprise.

A memory assailed him, unbidden. Unnerving. His heart thudded wildly in his chest. He paused, clutching the door handle, cursing his body for recalling so quickly what he’d worked long years to forget.

Logic caught up to his racing pulse, reining it in. The dim glow of banked coals cast ominous shadows, but Jeremy forced the room into focus. This was not that night. He was in his usual bedchamber at Waltham Manor, not wandering Corbinsdale Woods. More than twenty years had passed, and he was no longer a boy. Whatever surprise awaited him on the other side of the door, he was fully equipped to face it.

When he slid back the rusted bolt and wrenched open the door, Jeremy was prepared for the worst.

He had an instant to register a feminine silhouette, a tangle of dark curls, and two hands grasping his shoulders. Then Lucy Waltham, the younger sister of his oldest friend, popped up on her toes and pressed her lips to his with such force, he stumbled against the doorjamb.

Good Lord. The girl was kissing him.

Well, he thought ironically, he’d been prepared for the worst. And of the many kisses Jeremy Trescott had experienced in his nine-and-twenty years, this was, undoubtedly, the worst.

Lucy kissed with her lips perfectly puckered and her eyes open wide. And if she lacked in finesse, she compensated with bold enthusiasm. Her hands were everywhere at once—tangling in his hair, skimming his shoulders, exploring the broad expanse of his chest.

This wasn’t a kiss. It was a siege.

Furthermore, it was incomprehensible, wholly illogical, and a dozen different shades ofwrong .

Somehow Jeremy’s hands found their way to her elbows, and he wrested himself from her eager embrace. “Lucy! What the devil do you think you’re doing?”

“Shhhh. ” Her eyes darted to either side, scanning the darkened corridor. Then her gaze tilted back up to his, narrowing with a disturbing intensity, and Jeremy fancied briefly—absurdly—that someone had painted a target on his face.

“I’m practicing,” she whispered, her fingers tightening over his arms. “Let me try one more time. ”

She swooped up for another kiss, and he instinctively ducked, pulling her into the room and shutting the door behind them. In a more rational moment, it might have occurred to him that the impropriety of kissing his host’s sister in the corridor would only be compounded by yanking her into his bedchamber. But Jeremy’s faculties of reason had temporarily vacated Waltham Manor.

Lucy had, quite literally, kissed him witless.

He stared at her, mute with confusion. Did what work? At the moment, it seemed that nothing worked, least of all his brain. Shock had frozen his limbs. He certainly couldn’t force an answer from his lips.

Stepping back, she crossed her arms over her crimson velvet dressing gown and surveyed his form boldly. As her gaze traveled downward, Jeremy grew uncomfortably aware of his own dishabille, from nightshirt to worn breeches to bare feet.

A satisfied smile spread across her face. “It must have worked. You did pull me into your bedchamber. ” She reached for the door handle. “Very well, Jemmy. I suppose that’s enough practice. I’ll see you at breakfast. ”

She cracked open the door. Jeremy put out a hand and slammed it shut.

Shooting him a glare, she grasped the handle with both hands and tugged. “I beg your pardon. I’ll be on my way, then. ”

“No, you won’t. ” He leaned his weight on the door, effectively bolting it closed. Lucy might be used to flouting her brother’s half-hearted attempts at guardianship, but Jeremy had four inches and two stone on Henry Waltham, not to mention an iron will. Lucy did not walk all over him.

He mustered his most autocratic, Earl-of-Kendall tone. “You are not going anywhere. You’re going to sit down and explain yourself. ” She opened her mouth to object. He grabbed her by the elbow and steered her toward a chair. “But first,” he said, “I am going to have a drink. ”

She stopped struggling under his grip and dropped gracelessly into the chair. “A drink,” she repeated. “Why didn’t I think of that? A drink would be just the thing, thank you. ”

Shaking his head, Jeremy strode to the bar and poured a single glass of whiskey. He downed half the liquor in one greedy swallow, closing his eyes to savor the burn spreading down his throat. When he opened them again, he looked around to assure himself this was, indeed, the same Waltham Manor he’d been visiting each autumn since Cambridge. Roughhewn beams scored the sloping ceiling. Muted tapestries covered the walls, and an unfussy, timeworn carpet obliged his bare feet. The room had not altered in the past eight years, any more than it likely had in the past one hundred.

In decor, in landscape, in the quartet of old friends enjoying their annual sporting holiday—Waltham Manor had remained a welcome constant in Jeremy’s life. Until this year, when everything had changed.

“Why couldn’t everything just go on as it was?” Lucy stirred the fire with a poker, sending swirls of agitated sparks into the air. “Why did Felix have to go and get married? He’s ruined everything. ”

Jeremy drowned his reply with a sip of his drink. He would not have admitted it, but he rather agreed.

“It was all right when Henry got married,” she continued. “Marianne’s so busy with the children, at least she stays out of the way. But that shrew Felix married is going to expect to be entertained. And to make it all worse, she’s brought along her sister, that Sophia. ”

“Mrs. Crowley-Cumberbatch andMiss Hathaway are, by all accounts, charming young ladies. One would think you’d be glad of their company. ”

She threw him an incredulous look.

“Or not. ” Truth be told, Jeremy wasn’t glad of their presence, either. There was nothing precisely offensive about Felix’s wife, Kitty, or her sister, Sophia. To the contrary, Sophia Hathaway was the epitome of an inoffensive, well-bred society beauty. A bit of meringue—insubstantial, but pleasing enough, if one’s tastes ran to sweet. As Toby’s apparently did.

Jeremy tossed back another swallow of whiskey and tasted the irony. Henry and Felix married, Toby on the verge … their bachelors’ retreat had become a family house party. Well, if all his friends were determined to shackle themselves in marriage, at least he would be in no imminent danger of joining them. All three ladies at Waltham Manor were safely accounted for.

The sound of fingers drumming wood interrupted his thoughts. “Do you intend to drink the whole bottle yourself?”

Unless, of course, one counted Lucy.

And he did not count Lucy. She was neither eligible nor a lady. She was Henry’s much younger sister and ward, and she was Jeremy’s personal version of a biblical plague. She’d spent years devising ways to get under his skin. Now she was charging into his bedchamber and … andpracticing .

Much as he wished to erase that kiss from his memory, he couldn’t ignore it. Neither could he ignore the obvious implications of that word, “practicing. ”

He could, however, ignore her request for a drink. Jeremy refilled his own glass and carried it toward the hearth, dropping into the chair opposite hers. Raking a hand through his hair, he exhaled slowly. “I don’t like to ask this. I dread your response. But for what, exactly, are you practicing?”<
br />
“Not ‘what,’” she answered. “Who. ”

Oh, it only got worse. “Forwhom are you practicing, then? Some local youth? The vicar’s boy?”

He gave a wry laugh. “For Toby? Why would you be kissing Toby? He’s all but engaged to Miss Hathaway. ”

She hugged her knees to her chest, curling into a ball of red velvet and chestnut curls. The chair’s masculine proportions dwarfed her, and her green eyes brimmed with raw, undisguised hurt. “Then it’s true. ”

Bloody hell. Suddenly this bizarre nighttime visit made sense. Jeremy punched the arm of his chair. Of all the irretrievably stupid things to say.

“My maid said she heard it from Toby’s valet. I didn’t want to believe her. Icouldn’t believe her. But it’s true. ”

Jeremy had to look away. It was a matter of self-preservation. Lucy’s countenance was a collection of pixie features set within a heart-shaped face—a face designed to display, unfiltered, every emotion of the heart within. One couldn’t look at her without knowing exactly how she was feeling, and Jeremy didn’t wish to know how Lucy was feeling. He preferred to keep a respectful distance from even his own emotions.

“How could he?” she squeaked.

Jeremy winced. Lucy sniffed loudly, and he took another slow sip of whiskey. She could not cry, he wanted to remind her. That was the rule—Henry’s single exercise in authority. He’d allowed the chit to run rough shod over them every autumn, tagging along on their hunting and fishing excursions, parroting their curses, even taking nips off their flasks—under one condition. Lucy was not to cry. In eight years, he had never seen her shed a single tear. He prayed she wasn’t about to start now. If there was one thing he couldn’t abide, it was a crying woman.

He stole a glance at her. Damn it, her chin was quivering. “You’re not going to start weeping, are you?”

Jeremy busied himself adding wood to the fire, stalling for time.

Curse Toby. This was all his fault. He’d always made such a pet of the girl. Every autumn, Lucy clung to Toby like a tick on a hound. He baited her hooks and taught her bawdy Latin conjugations. He brought her flowers and wove her crowns of ivy that went straight to her head. His Diana, Toby called her. Goddess of the hunt.

Goddess he may have dubbed her, but the worship was all on Lucy’s side. A young girl’s harmless infatuation—that was all it had seemed. Obviously, to Lucy it had seemed much more. And now the task of disabusing her of all those romantic notions had somehow fallen to Jeremy. Just his luck. But also fitting, he supposed. If he’d ever harbored a romantic notion, which was doubtful, he’d been disabused of it long ago.

He clapped the dust from his hands and reclined in his chair. In his most magnanimous tone, he began, “Now, Lucy, you must understand …”

“Don’t, Jemmy. Don’t you dare speak to me as if I were a child. I ought to have come out two seasons ago. If only Marianne weren’t perpetually confined. Perhaps I am not a genteel lady like Sophia Hathaway. But I’m not a girl any longer, either. ”

She stretched a bare foot toward the fire and absently flexed her ankle. The sinuous grace of the motion caught Jeremy’s gaze. Caught it, and trapped it. He couldn’t look away. She circled her foot idly, her skin glowing golden in the firelight. His eyes swept upward, tracing the sweet curve of her calf to where it disappeared under her dressing gown.

Then Lucy shifted, crossing her legs. Red velvet fell like a theater curtain, abruptly ending the show. A swift blow of disappointment caught Jeremy in the chest. The sensation drifted downward, mellowing to the familiar ache of thwarted desire. God, this night was simply rife with surprises.

“I suppose you’re not,” he muttered, tearing his gaze away and giving himself a mental shake. “Very well, let us speak as adults. You can begin by dropping that childish nickname and addressing me in a proper fashion. ”

“You mean by yourtitle? I don’t even remember your old one, let alone the new. ” She looked up at the ceiling.