Home » Tara Sue Me » The Dominant
←Home
The dominant, p.1 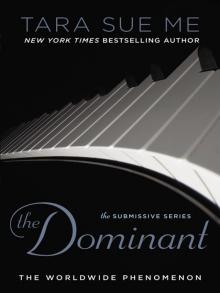 Author: Tara Sue Me Chapter One

The phone on my desk gave a low double beep.

I glanced at my watch. Four thirty. My administrative assistant had explicit instructions not to interrupt me unless one of two people called. It was too early for Yang Cai to call from China, so that left only one other person.

“Did I receive a package from him today?” I asked.

Papers rustled in the background. “Yes, sir. Should I bring it in now?”

“I’ll get it later. ” I disconnected and switched to the headset. “Godwin, I expected you to call earlier. Six days earlier. ” I’d been waiting for the package just as long.

“I’m sorry, Mr. West. You had a late application I wanted to include with this batch. ”

Very well. It wasn’t like the women knew I had a deadline. That was something I would discuss with Godwin later.

“How many this time?” I asked.

“Four. ” He sounded relieved I’d moved on from his lateness. “Three experienced and one without any experience or references. ”

I leaned back in my chair and stretched my legs. We really shouldn’t be having this conversation. Godwin knew my preferences by now. “You know my feelings on inexperienced submissives. ”

“I know, sir,” he said, and I pictured him wiping the sweat from his brow. “But this one is different—she asked for you. ”

I stretched one leg and then the other. I needed a nice, long jog, but it would have to wait until later that evening. “They all ask for me. ” I wasn’t being vain, just honest.

“Yes, sir, but this one wants to service only you. She’s not interested in anyone else. ”

“Her application specifically states she will sub for you and no one else. ”

I had rules about prior experience and references because, to be frank, I didn’t have time to train a submissive. I preferred someone with experience, someone who would learn my ways quickly. Someone I could teach quickly. I always included a lengthy checklist in the application to ensure applicants knew exactly what they were getting themselves into.

“I assume she filled out the checklist properly? Didn’t indicate she would do anything and everything?” That had happened once. Godwin knew better now.

The one he’d held the package up for, then. “Thank you, Godwin. ” I hung up the phone and stepped outside my office. Sara handed me the package.

“Why don’t you go home, Sara?” I tucked the envelope under my arm. “It should be quiet the rest of the evening. ”

She thanked me as I walked back into my office.

I got a bottle of water, set it on my desk, and opened the package.

I flipped my way through the first three applications. Nothing special. Nothing out of the ordinary. I could set up a test weekend with any of the three women and probably wouldn’t be able to tell the difference between them.

I rubbed the back of my neck and sighed. Maybe I had been doing this too long. Maybe I should try again to settle down and be “normal. ” With someone who wasn’t Melanie this time. The problem was, I needed my dom lifestyle. I just wanted something special to go along with it.

I took a long sip of water and looked at my watch. Five o’clock. It was highly doubtful I’d find my something special in the last application. Since the woman had no experience, it really wasn’t even worth my time to review her paperwork. Without looking at it, I took the application and put it on top of my To Shred pile. The three remaining I placed side by side on top of my desk and read over the cover pages again.

Nothing. There was basically nothing differentiating the three women. I should just close my eyes and randomly pick one. The one in the middle would work.

But even as I looked over her information, my gaze drifted to the shred pile. The discarded application represented a woman who wanted to be my submissive. She’d taken the time to fill out my detailed paperwork and Godwin had held up sending everything because of Miss I-have-no-experience-and-want-only-Nathaniel-West. The least I could do was respect that woman enough to read her information.

I picked up the discarded application and read the name.

The papers slipped from my hand and fluttered to the ground.

I was a complete success in the eyes of the world.

I owned and ran my own international securities corporation. I employed hundreds of people. I lived in a mansion that had graced the pages of Architectural Digest. I had a terrific family. Ninety-nine percent of the time, I was content with my life. But there was that one percent . . .

That one percent that told me I was an utter and complete failure.

That I was surrounded by hundreds of people, but known by very few.

That my lifestyle was not acceptable.

That I would never find someone I could love and who would love me in return.

I never regretted my decision to live the lifestyle of a dominant. I normally felt very fulfilled, and if there were times I did not, they were very few and far between.

I felt incomplete only when I made my way to the public library and caught a glimpse of Abby. Of course, until her application crossed my desk, I had no way of knowing if she even knew I existed. Until then, Abby had symbolized for me the missing one percent. Our worlds were so far apart, they could not and would not collide.

I allowed my mind to wander down pathways I’d closed off for years. Opened the gates of my imagination and let the images overtake me.

Abby n**ed and bound to my bed.

Abby on her knees before me.

Abby begging for my whip.

I picked her application up off the ground and started reading.

Name, address, phone number, and occupation, I skimmed over. I turned the page to her medical history—normal liver function tests and blood cell counts, HIV and hepatitis negative, negative urine drug screen. The only medication she took was the birth control pills I required.

Several items were marked “No, hard limit. ” I respected that—I had my own hard limits. Looking over the list, I discovered that several of them lined up with hers. Several of them did not. There was nothing wrong with that—limits changed; checklists changed. If we were together for the long term—

What was I thinking? Was I actually thinking about calling Abby in for a test?

But I knew, I knew, that if the application were from anyone other than Abby, I wouldn’t even give it a second glance. I would shred it and forget it existed. I didn’t train submissives.

But it was from Abby, and I didn’t want to shred it. I wanted to pore over her application until I had it memorized. I wanted to make a list of what she had marked as “willing to try” and show her the pleasure of doing those things. I wanted to study her body until its contours were permanently etched in my mind. Until my hands
knew and recognized her every response. I wanted to watch her give in to her true submissive nature.

I wanted to be her dom.

Could I do that? Could I put aside my thoughts of Abby, the fantasy I would never have, and instead have Abby, the submissive?

And if Abby King no longer existed. Or if she was replaced by Abigail King . . .

I picked up the phone and dialed Godwin.

“Send Abigail King my personal checklist. If she’s still interested after reviewing it, have her call Sara for an appointment next week. ”

Abigail made an appointment for Tuesday afternoon at four. All day Monday I waited for Sara to tell me she had called and canceled, but by Tuesday at one, I had accepted the fact that Abigail would probably show up. It made me restless.

I paced from my window to my desk and back again, remembering Abigail as I had last seen her—complete patience as she tutored a high school student, laughing softly at something the teenager said. Then I pictured her as I would now allow myself to—as my submissive, ready and willing to service me. To obey my every command.

I walked back to my desk and sat down. For the third time in the last hour, I pulled out the packet of information I’d prepared for her and reread it. Triple-checked that everything was in order.

My cousin, Jackson, called at three thirty and kept me from going completely stir-crazy.

“Hey,” he said. “We still on for racquetball Saturday?”

I groaned. I had forgotten the promise I’d made to Jackson that we would have a rematch on Saturday. If Abigail agreed to a weekend test, did I really want to leave her? On the other hand, maybe it would be good to get away from her for a few hours. Give myself a break from what promised to be an intense weekend.

Jackson picked up on my hesitation. “It’s okay if you can’t. I can always go skydiving. ”

The last time he went skydiving, it almost ended his career as quarterback, so I knew he was joking.

At least I hoped he was joking.

“Don’t blackmail me,” I said. “I wasn’t trying to bail out. I was just making sure my calendar was clear. I might have a date. ”

“A date? Getting back on the horse after Pearl Girl?”

“That nickname is completely disrespectful to Melanie. ” And he couldn’t be further from the truth. I’d had plenty of horse rides since Melanie.

“Enough of me and my love life,” I said, because I didn’t think Jackson had any idea what my sex life was really like. “Who are you bringing to your mom’s benefit?”

“No one at the moment. Thanks for the reminder,” he said with a touch of sarcasm.

We talked a bit more and eventually hung up after agreeing I’d meet him on Saturday for our racquetball rematch.

In many ways, Jackson was the brother I never had. My parents had been killed in a car accident when I was ten. My mother’s sister, Linda, raised me afterward.

Todd Welling was the third member of my close-as-family group of friends, along with his wife, Elaina. Todd and his family had lived next door to the Clarks while we were growing up. Elaina had lived nearby, and she and Todd had dated throughout high school and during college. They married the month after she graduated. Todd was now a psychiatrist and Elaina a fashion designer.

I envied Todd and Elaina the companionship they had with each other. The passion and love they felt was palpable. I had long since given up on finding a relationship like theirs, but such was the life I lived.

To have Abigail as a sub would almost make up for it.

“Yes, Sara?” I looked at my watch—three forty-five. Abigail was punctual. Another positive.

“Thank you, Sara. I’ll let you know when I’m ready for her. ” I disconnected.

I drank some water and looked over the pages one more time. All was ready. I picked up her application and reread it, although I’m not sure why. I had it memorized.

When the clock read five after four, I called Sara and told her to send Abigail in.

I took a deep breath, opened a blank document on my computer, and started typing.

Lessons From the Rack
Submissive