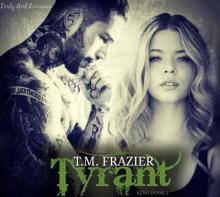 The average time spent between incarcerations for a career criminal is six months.

I’d only been out three.

I’d expected to find Max in that car. Instead, cold metal clinked around my wrists, and the asshole pig had the audacity to laugh when he tightened the cuffs to the point of pain.

I didn’t wince, though. I wouldn’t give him the satisfaction. He pressed down on my head roughly and shoved me hard into the back of the old police cruiser. I landed on my side, and my cheek slammed against the sticky seat. It smelled like vomit and bad decisions. My hands tingled from the loss of blood flow.

The motherfucker was lucky I was in cuffs.

Three years. They already had me for three fucking years, and they were going to have me for a whole lot longer.

Kidnapping wasn’t exactly rewarded with a light slap on the wrist, especially for someone whose record was as long as mine. I promised I was never going back, but keeping my promises is just another thing I was never very good at.

I was all out of fucks to give though. The system could have me. I belonged to them, but they didn’t fucking own me. They would NEVER fucking own me.

I will walk to the fucking chow line with a shit-eating grin on my face wearing my scratchy orange jumpsuit every motherfucking day. I will play cards with the worst of the worst and make nice with the guards who are willing to cut me some slack. At night, when I’m alone in my windowless cell with my dick in my hand, I will remember what it was like to have her in my bed; how her innocent wide eyes stared up at me as I moved inside her. The way she arched her back into me as I made her come over and over again.

I kept telling myself I didn’t have anything to offer her, but that wasn’t true.

Pup. Doe. Ray. Whatever the fuck her name was. I loved her more than what was normal, rational, or sane, and I would gladly rot in fucking prison with a smile on my face if I knew my girl was going to be okay.

I should have known that motherfucker was going to fucking cross me.

“The notorious Brantley King,” the pig said with a smirk as he got into the front seat. The plastic-like leather squeaked against his belt as he closed his door and started the engine. “You’d think you’d have learned your lesson by now, boy. ”

He laughed and shook his head. It was obvious this guy was getting some sort of sick pleasure out of being the one to put me in cuffs.

“King,” I corrected him defiantly. Nobody called me Brantley but her.

“Excuse me?” he asked, raising an eyebrow at me through the rearview mirror.

I sat up straight, meeting his gaze with mine, as if I were staring straight through to his pussy-ass soul. “They call me King, mother fucker. ”

The rage inside me grew to epic proportions. That’s when I noticed the detective didn’t turn onto the main road but instead drove straight onto the path through the woods.

This guy was no fucking cop. I spotted his gun; he’d set it on the dash. It was a Judge, not the kind of gun that was standard police-issue. This guy wasn’t taking to me jail.

He was taking me to ground.

There was no time to waste.

My girls needed me.

More than that, I needed them.

The moron had cuffed me in front. That should’ve been my first indicator that something was off. A real cop would’ve never done that unless he was transporting a nonviolent criminal.

Using the chain that connected my cuffs, I trapped the fake detective’s neck against the headrest and yanked back with all my might until I felt like my biceps were going to explode.

His hands left the wheel and flailed about as he tried to connect with my head, but I dodged him by lowering myself behind the seat.

The car veered off the path and bounced from side to side as it ran over a patch of knee-high roots.

The pressure mounted behind my eyes as I tugged back on the cuffs, squeezing tighter and tighter. I didn’t release my hold until the car came crashing to a stop and every inch of life had drained from his body.

The fake cop was right; I would never be anything more than the notorious Brantley King.

That was fine by me because the senator had a lesson to learn. You did not take what was mine and not expect to pay in blood, sweat, or pussy.

He took my girl. He wanted to take my life.

His payment would be in blood.

That’s what they say anyway. But it wasn’t until I crawled out of the wreckage, picking shards of glass from my skin, that I realized how true that saying really was.

I could practically taste the revenge on my tongue, I was salivating in anticipation of the moment I would be able unstrap a belt from my arm and wrap it around the senator’s fucking neck for crossing me.

It had only been minutes since I’d killed a man.

But it had been a long time since I’d taken pleasure in it.

Adrenaline like I’d never known, in an amount great enough to wake a corpse, coursed through my veins.

I was high on it.

It was like I’d pushed my nose into a bowl of blow and inhaled over and over until I felt like I was invincible.

And until I fixed the fucking mess I’d made, I wasn’t planning on coming down. I felt sorry for any motherfucker who had balls big enough to try and stand in my fucking way.

That was the moment I’d first heard it.

Time to show those cock suckers they fucked with the wrong kid from the wrong side of the motherfucking trailer park. Preppy’s voice was as clear to me in my head as if he stood beside me.

I was going fucking insane.

By the time I’d crawled out from the woods and made my way back to the house Bear was just getting off of his bike. When he saw me, he tossed his cigarette to the ground. He marched toward me with hard, angry steps; his forehead creased with lines, his fists clenched. The dry grass crunched under his heavy steps. “Listen, motherfucker, I didn’t want it to come to blows, but the way you fucking handled that shit just ain’t fucking right. She deserves better than that, better than this, better than to be fucking lied…” Bear stopped when he saw the mud and blood I was covered in. “What the fuck happened to you?”

I pushed past him, ignoring his question, running toward the house, taking the steps three at a time. I threw open the front door so hard, the screws from the top hinge shot out and clanked down onto the deck. “Pup!” I called out. A small part of me held out hope that somehow she had found a way to stay. But the second I entered the house I didn’t have to search the rooms to know she was gone. I felt the emptiness. “Fuck!” I roared, picking up one of the kitchen chairs. I launched it across the room, where it skipped over the glass coffee table, cracking it down the center, punching a basketball-sized hole in the thin drywall as it came crashing to a halt.

Bear followed me into the house. “Are you going to tell me what happened or you gonna tear the fucking house up some more?” I moved passed him on my way to the garage. I needed my bike and some provisions.

The kind of provision that required bullets.

One handcuff was still locked on me, the other end was open and dangling from my wrist, the chain stained with the fake cop’s blood. As soon as that fucker was dead and the car crashed against the
tree, I’d pulled myself over into the front seat. Thank fucking god the handcuff keys were still in that fuckers pocket. “I see that,” Bear said. “Where the fuck is Doe?” There was a protective tone in his voice, which rubbed me the wrong fucking way, but I’d deal with that later.

After I got my girl back.

“The good senator fucked me over. There was no Max. And the last time I saw Pup, she was kicking and screaming as I was being carted away by a guy hired to take me out. ” The image of her struggling in the senator’s grip made me see red. “Make a few calls,” I clipped. “Find out where he might be taking her. ”

“Fuck. ” Bear said. Instead of pulling out his phone he bent over and rested his hands on his knees.

“What the fuck now?”

Bear pinched the bridge of his nose. “There was a reason why I came back here, man. Besides to kick your ass for fucking shit up with Doe. I’m thinking that before you solve this problem with a spray of bullets, you should probably know that it might not have been the senator who was trying to send you to ground,” he said, standing up straight and leaning up against the wall where he lit a cigarette.

“What the fuck is that supposed to mean? He was the one who had the guy arrest me. Of course it was him. ”

Bear shook his head. “He’s a problem, but he’s not our only problem. Rage called not twenty minutes ago, and as you know that fucker’s got eyes and ears everywhere. Word is that the shit that went down with Isaac isn’t over. Far fucking from it. ” He ran his hand through his hair and the ash from his cigarette fell to the carpet.

“I made that fucker’s head explode myself. Looked pretty over to me,” I argued.

“No, not Isaac. He’s fucking worm food, but someone who’s fucking pissed about Isaac not being able to continue selling his shit in Florida on account of him being dead. Someone who ain’t afraid to kill entire families to get to the people who wronged him. ”

King
The Dark Light of Day
The Outskirts Duet