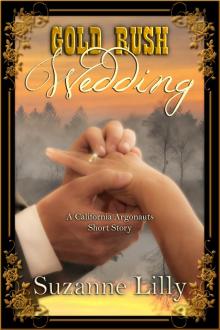 This is a work of fiction. Names, characters, businesses, places, events and incidents are either the products of the author’s imagination or used in a fictitious manner. Any resemblance to actual persons, living or dead, or actual events is purely coincidental.

This ebook is licensed for your personal enjoyment only. This ebook may not be resold or given away to other people. If you would like to share this book with another person, please purchase an additional copy for each recipient. If you’re reading this book and did not purchase it, or it was not purchased for your use only, then please return it and purchase your own copy. Thank you for respecting the rights and hard work of this author.

Thank you for downloading this eBook. Join the News from Suzanne Lilly mailing list and get updates on new releases, deals, and bonus content. One subscriber wins a gift card each time the newsletter is released.

The stone looked like any other stone. Gray with specks of black and crystals that reflected the sunlight. Ordinary granite. Ordinary stone.

"Ah. How interesting." Lucinda cast a questioning glance at George. Why had he dragged her up the hillside of their land, a handkerchief over her eyes, and then unveiled her eyes to reveal this unremarkable stone?

"You don't know what stone this is, do you?" George put his right foot on the top of the granite block.

"I don't see Excalibur sticking out of it, so I know it's not the stone that held King Arthur's sword."

"Correct. That it is not. It's something far more perfect, far more important than some old legend."

Lucinda played along. She put her finger on her chin, as if to contemplate the matter. "It's not the Rock of Gibraltar."

"Correct again. What an astute and observant young woman you are, Miss York. Guess again."

"It most definitely is not Plymouth Rock."

George stepped away from the stone and made a slight bow to Lucinda. "It's more meaningful than the rock the pilgrims once stepped upon."

"Do tell, Mr. Arnold. What is the mysterious purpose of this rock you brought me to see?"

George took her hands in his. He held them as he looked into her eyes. She watched as a slight breeze ruffled the curl that always fell over his forehead, in wonderment at how such a small thing as a curly lock could stir a spark of love in her heart. She smiled.

"This rock is the foundation of our life together. It's to be the cornerstone of the new house I'm building for you. While you're away at medical college in Philadelphia, I'll be cutting more stones like this one, so that when you return ---"

"Yes? When I return?" Lucinda pressed into George and gazed up into his face, a teasing smile on her lips.

"You'll have the most beautiful, most magnificent, granite home in California. It will be grander than any home in Sacramento. It will be a home worthy of the name LuciArno."

George had a deep, passionate streak that most people didn't know about. It was this underlying passion that drove him to create and accomplish.

A lump formed in Lucinda's throat, and she couldn't answer at first. She swallowed. When she spoke, emotion made her voice thick like molasses. "I do love that name, LuciArno. It sounds like the two of us entwined."

"It sounds like our home." George put his arm around her waist and kissed her. His lips tasted sweet, like the lavender and anise biscuits they'd eaten before coming up the hillside. Lucinda melted into the kiss.

A hawk flew overhead, in a sky clear enough to crisp like an ice sheet, casting its shadow across the two lovers. In the brush beyond the trees, Lucinda heard a creature lumbering for cover.

"This is my dream come true. I'm the luckiest man on earth." George turned to the trees bordering the field where they stood. He cupped his hands and shouted. "Did you hear that, world? I'm marrying the most beautiful woman alive."

Lucinda laughed and cupped her hands. "I'm marrying the best man in the world." Their cries echoed off a nearby granite outcropping and startled a covey of quail out from behind a scrubby bush. The mother peeped at her babies to follow her into a gully as they scurried away, crests bouncing.

George wrapped his arms around her and they took in the scenery together. "I love this land, Lucinda. There is an abundance of everything a man needs to create a good life right here."

He held out one hand, forming an L with his thumb and fingers. "Just to the right of that outcropping is where the opening to the LuciArno mine will be. Down the slope from it will be the homes of the miners. The town of LuciArno." He turned her to face left. "Over there, on that open space I'll run sheep and Spanish cattle. We'll have a small lake for fresh water, formed by damming up the creek that runs through the land. I'll use the rock taken from the mine to build the dam."

"It all sounds beautiful, George. I'm sorry I won't be here to help you homestead the land and get it all started."

"I'm not sorry. You have to go to Philadelphia. Your dreams have been to be a doctor as long as I've known you. This doesn't change a thing. LuciArno is my wedding present to you."

Lucinda chewed on her bottom lip. Thanks to Sam Brannan's letter of recommendation, she had the opportunity of a lifetime. She would be attending the Philadelphia Female Medical College. It was newly founded and had a woman dean, something unheard of before 1850. She'd booked passage on a steamer heading back east in two weeks. Yet even through her excitement, hesitation grew in the shadows of her heart. What if George's passion for her cooled while she was gone? Two years could seem like forever to a lonely miner.

"What will you do if you get sick?" No one would care for him like she would. She worried about him working too hard.

"There are plenty of doctors in Sacramento. I'm sure one of them will take in a patient like me."

"Bah! You mean ornery doctors. Stubborn ones. They'll probably charge you double." Lucinda teased him. "I won't charge you anything but a kiss."

She demonstrated by brushing his lips with a light kiss. “Now, my darling husband-to-be, we should get back to Sacramento. Your sister Abigail is ready for the final fitting of my wedding dress.”

They walked past a small, one room cabin with patches of wild lavender and poppies growing in front of it. "Is this where you'll be living while I'm away?" she asked.

"Yes. It's also where we'll be spending our time together before you leave."

Lucinda breathed in the scent of the fresh blooms. She picked a small bunch and pulled a lace handkerchief from her sleeve. It was one George's mother had loaned Lucinda when George's father had been ill. Lucinda had kept it since then, and now it made a beautiful wrapper for the stems of the flowers. "I think I'd like my wedding bouquet to be made from these flowers." She pulled one stem of lavender and one poppy out of the bunch. She tucked them into a buttonhole on George's shirt. "And this will be your boutonniere."

They climbed up into the horse cart and headed back down the hill
to Sacramento proper, to the Mansion House, the hotel where Abigail waited for Lucinda to finish her gown. Although she was excited for the wedding, a deep sadness engulfed Lucinda because her parents would not be at her wedding with George. She glanced at him and could see from the look on his face that he intuitively knew what she was thinking about. He squeezed her shoulder and said, "They'll be with us in spirit. Make a corsage and a boutonniere for your Ma and Pa, too."

At that moment, Lucinda knew she could not have met a better man. A man whose strength was only matched by his tenderness.

Gold Rush Wedding by Suzanne Lilly / History & Fiction / Romance & Love / Western have rating 3.3 out of 5 / Based on33 votes