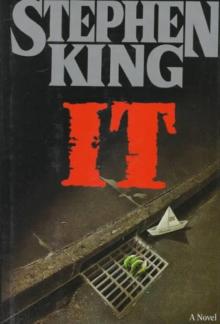 PART 1 - THE SHADOW BEFORE

CHAPTER 7 - The Dam in the Barrens

CHAPTER 8 - Georgie's Room and the House on Neibolt Street

CHAPTER 17 - Another One of the Missing: The Death of Patrick Hockstetter

PART 5 - THE RITUAL OF CHUD

CHAPTER 19 - In the Watches of the Night

CHAPTER 21 - Under the City

CHAPTER 22 - The Ritual of Chud

It's a small city, a place as hauntingly familiar as your own hometown. Only in Derry, the haunting is real....

They were just kids when they first stumbled upon the horror. Now they are grown-up men and women who have gone out into the big world to gain success and happiness. But none of them can withstand the force that has drawn them back to Derry to face the nightmare without an end, and the evil without a name.

"It will overwhelm you. . . . Characters so real you feel you are reading about yourself . . . scenes to be read in a well-lit room only!"

THE DARK TOWER: THE GUNSLINGER

THE DARK TOWER II: THE DRAWING OF THE THREE

THE EYES OF THE DRAGON

THE DARK TOWER I:

Cycle of the Werewolf

The Eyes of the Dragon

The Girl Who Loved Tom

Storm of the Century

Published by New American Library, a division of

Pages 1091-93 constitute an extension of this copyright page.

Without limiting the rights under copyright reserved above, no part of this publication may be reproduced, stored in or introduced into a retrieval system, or transmitted, in any form, or by any means (electronic, mechanical, photocopying, recording, or otherwise), without the prior written permission of both the copyright owner and the above publisher of this book.

This is a work of fiction. Names, characters, places, and incidents either are the product of the author's imagination or are used fictitiously, and any resemblance to actual persons, living or dead, business establishments, events, or locales is entirely coincidental.

The publisher does not have any control over and does not assume any responsibility for author or third-party Web sites or their content.

The scanning, uploading, and distribution of this book via the Internet or via any other means without the permission of the publisher is illegal and punishable by law. Please purchase only authorized electronic editions, and do not participate in or encourage electronic piracy of copyrighted materials. Your support of the author's rights is appreciated.

"This old town been home long as I remember

This town gonna be here long after I'm gone.

East side west side take a close look 'round her

You been down but you're still in my bones."

"Old friend, what are you looking for?

After those many years abroad you come

With images you tended

Far away from your own land."

"Out of the blue and into the black."

The perfections are sharpened

The flower spreads its colored petals

wide in the sun

But the tongue of the bee

They sink back into the loam

that creeps over them, a shiver

The terror, which would not end for another twenty-eight years--if it ever did end--began, so far as I know or can tell, with a boat made from a sheet of newspaper floating down a gutter swollen with rain.

The boat bobbed, listed, righted itself again, dived bravely through treacherous whirlpools, and continued on its way down Witcham Street toward the traffic light which marked the intersection of Witcham and Jackson. The three vertical lenses on all sides of the traffic light were dark this afternoon in the fall of 1957, and the houses were all dark, too. There had been steady rain for a week now, and two days ago the winds had come as well. Most sections of Derry had lost their power then, and it was not back on yet.

A small boy in a yellow slicker and red galoshes ran cheerfully along beside the newspaper boat. The rain had not stopped, but it was finally slackening. It tapped on the yellow hood of the boy's slicker, sounding to his ears like rain on a shed roof ... a comfortable, almost cozy sound. The boy in the yellow slicker was George Denbrough. He was six. His brother, William, known to most of the kids at Derry Elementary School (and even to the teachers, who would never have used the nickname to his face) as Stuttering Bill, was at home, hacking out the last of a nasty case of influenza. In that autumn of 1957, eight months before the real horrors began and twenty-eight years before the final showdown, Stuttering Bill was ten years old.

Bill had made the boat beside which George now ran. He had made it sitting up in bed, his back propped against a pile of pillows, while their mother played Fur Elise on the piano in the parlor and rain swept restlessly against his bedroom window.

About three-quarters of the way down the block as one headed toward the intersection and the dead traffic light, Witcham Street was blocked to motor traffic by smudgepots and four orange sawhorses. Stencilled across each of the horses was DERRY DEPT. OF PUBLIC WORKS. Beyond them, the rain had spilled out of gutters clogged with branches and rocks and big sticky piles of autumn leaves. The water had first pried fingerholds in the paving and then snatched whole greedy handfuls--all of this by the third day of the rains. By noon of the fourth day, big chunks of the street's surface were boating through the intersection of Jackson and Witcham like miniature white-water rafts. By that time, many people in Derry had begun to make nervous jokes about arks. The Public Works Department had managed to keep Jackson Street open, but Witcham was impassable from the sawhorses all the way to the center of town.

But everyone agreed, the worst was over. The Kenduskeag Stream had crested just below its banks in the Barrens and bare inches below the concrete sides of the Canal which channelled it tightly as it passed through downtown. Right now a gang of men--Zack Denbrough, George's and Bill's father, among them--were removing the sandbags they had thrown up the day before with such panicky haste. Yesterday overflow and expensive flood damage had seemed almost inevitable. God knew it had happened before--the flooding in 1931 had been a disaster which had cost millions of dollars and almost two dozen lives. That was a long time ago, but there were still enough people around who remembered it to scare the rest. One of the flood victims had been found twenty-five miles east, in Bucksport. The fish had eaten this unfortunate gentleman's eyes, three of his fingers, his penis, and most of his left foot. Clutched in what remained of his hands had been a Ford steering wheel.

Now, though, the river was receding, and when the new Bangor Hydro dam went in upstream, the river would cease to be a threat. Or so said Zack Denbrough, who worked for Bangor Hydroelectric. As for the rest--well, future floods could take care of themselves. The thing was to get through this one, to get the power back on, and then to forget it. In Derry such forgetting of tragedy and disaster was almost an art, as Bill Denbrough would come to discover in the course of time.

George paused just beyond the sawhorses at the edge of a deep ravine that had been cut through the tar surface of Witcham Street. This ravine ran on an almost exact diagonal. It ended on the far side of the street, roughly forty feet farther down the hill from where he now stood, on the right. He laughed aloud--the sound of solitary, childish glee a bright runner in that gray afternoon--as a vagary of the flowing water took his paper boat into a scale-model rapids which had been formed by the break in the tar. The urgent water had cut a channel which ran along the diagonal, and so his boat travelled from one side of Witcham Street to the other, the current carrying it so fast that George had to sprint to keep up with it. Water sprayed out from beneath his galoshes in muddy sheets. Their buckles made a jolly jingling as George Denbrough ran toward his strange death. An
d the feeling which filled him at that moment was clear and simple love for his brother Bill ... love and a touch of regret that Bill couldn't be here to see this and be a part of it. Of course he would try to describe it to Bill when he got home, but he knew he wouldn't be able to make Bill see it, the way Bill would have been able to make him see it if their positions had been reversed. Bill was good at reading and writing, but even at his age George was wise enough to know that wasn't the only reason why Bill got all A's on his report cards, or why his teachers liked his compositions so well. Telling was only part of it. Bill was good at seeing.

The boat nearly whistled along the diagonal channel, just a page torn from the Classified section of the Derry News, but now George imagined it as a PT boat in a war movie, like the ones he sometimes saw down at the Derry Theater with Bill at Saturday matinees. A war picture with John Wayne fighting the Japs. The prow of the newspaper boat threw sprays of water to either side as it rushed along, and then it reached the gutter on the left side of Witcham Street. A fresh streamlet rushed over the break in the tar at this point, creating a fairly large whirlpool, and it seemed to him that the boat must be swamped and capsize. It leaned alarmingly, and then George cheered as it righted itself, turned, and went racing on down toward the intersection. George sprinted to catch up. Over his head, a grim gust of October wind rattled the trees, now almost completely unburdened of their freight of colored leaves by the storm, which had been this year a reaper of the most ruthless sort.

Sitting up in bed, his cheeks still flushed with heat (but his fever, like the Kenduskeag, finally receding), Bill had finished the boat--but when George reached for it, Bill held it out of reach. "N-Now get me the p-p-paraffin."

"It's on the cellar shuh-shuh-shelf as you go d-downstairs," Bill said. "In a box that says Guh-Guh-hulf . . . Gulf. Bring that to me, and a knife, and a b-bowl. And a puh-pack of muh-muh-matches."

George had gone obediently to get these things. He could hear his mother playing the piano, not Fur Elise now but something else he didn't like so well--something that sounded dry and fussy; he could hear rain flicking steadily against the kitchen windows. These were comfortable sounds, but the thought of the cellar was not a bit comfortable. He did not like the cellar, and he did not like going down the cellar stairs, because he always imagined there was something down there in the dark. That was silly, of course, his father said so and his mother said so and, even more important, Bill said so, but still--

He did not even like opening the door to flick on the light because he always had the idea--this was so exquisitely stupid he didn't dare tell anyone--that while he was feeling for the light switch, some horrible clawed paw would settle lightly over his wrist ... and then jerk him down into the darkness that smelled of dirt and wet and dim rotted vegetables.