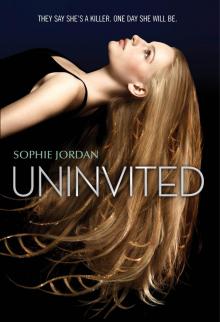 A new report on Homicidal Tendency Syndrome shows that cases are more dangerous and widespread than originally thought. The data illustrates a predisposition for extreme violence in HTS carriers and a clear correlation between the HTS gene and convicted murderers. This information, coupled with the rise in capital crime, calls for increased testing protocols and more severe measures to protect our citizens against HTS carriers. . . .

I ALWAYS KNEW I WAS DIFFERENT.

When I was three years old, I sat down at the piano and played Chopin. Mom claims I heard it the week before in a hotel elevator. I don’t know where I heard it. I just knew how to place my fingers on the keys . . . how to make them move. Like one knows how to walk, it was just something I knew. Something I did.

Music has always been my gift. That thing I was good at without having to try. First piano. Then the flute. Then violin. It never took me long to get the hang of a new instrument. All my life I heard words like gifted. Extraordinary. Blessed. When everyone discovered I possessed a voice to rival my skills with an instrument, I was called a “prodigy. ”

These talents aside, I had the normal dreams, too. When I was six I decided I would be an archeologist. The following year, a race car driver. There was also the requisite princess fantasy in there I spent hours in my room, building fort castles, only to have my brother knock them down. I just pretended he was a dragon and rebuilt those castles.

I had all these dreams to become something. Someone.

No one ever said I couldn’t.

No one ever said killer.

Closing my eyes, I savor the sensation of Zac’s lips on my throat. He inches toward the sensitive spot right below my ear and I giggle, my body shaking in his arms.

“Zac, we’re at school,” I remind him, arching away and shoving halfheartedly at his shoulder.

He levels brilliant green eyes on me, and my breath catches.

Two freshman girls pass us. They try to avert their eyes, play it cool, and look straight ahead, but I can see it’s a battle for them. A battle they lose. Their gazes skip to slide over Zac admiringly. He’s in his gym shorts. An Everton rugby shirt stretches tight over his lean torso. When he lifts an arm and props his hand on the locker behind me, his shirt rides up to reveal a flat stomach, sculpted from long hours at the gym. My mouth dries a little.

He’s oblivious to them. “But don’t you like this?” He leans in, backing me against the lockers, and places a lingering, tender kiss at the corner of my mouth. “And this. ” He kisses my jawline next.

My stomach flutters and I’m about to give in, forget that I have Mrs. McGary and tons of calculus homework waiting, and surrender to making out with Zac outside the orchestra room, where Anthony Miller is less than successfully warming up on the drums. One of the only instruments I don’t play, but I’m sure I could still play better than Anthony.

Zac pulls back with a sigh and gives me one of those smoldering looks that I know he thinks is irresistible. Only because it is. Only because every girl at school trips over herself when he bestows that smile on them.

But he chose me. My heart swells inside my chest and I let him kiss me again even though I’m already late for practice and Mrs. McGary hates it when I’m late. She constantly reminds me that I’m supposed to be the example for everyone.

Tori walks up to us with a roll of her eyes. “Get a room, you two. ” She pulls open the orchestra room door and the sound of the drum solo inside murders my ears.

She holds the door open for me. “Coming, Davy?”

Zac frowns at her. “She’ll be there in a minute. ”

Tori hesitates, staring at me with that whipped puppy-dog look on her face. “Are we still studying tonight? I thought you wanted me to help you with your calculus. ”

I nod. “I do. ” Calculus. The bane of my existence. I barely made an A these last six weeks. And that A was mostly due to Tori and her endless patience with me. “We’re still on. ”

Tori disappears inside the orchestra room. Zac blows out a breath.

I smooth a hand over his firm chest. “Be nice. ”

I make an effort to divide my time between Zac and Tori equally, but it’s a balancing act. I never manage to satisfy either one of them. “Have I said that I can’t wait until next year?” I ask. It’s the only thing I can think to say in moments like this when he complains about Tori.

He stares at me knowingly. He has a way of looking at me. So deeply. Like he can see right to my very soul. He knows I’m trying to distract him with the promise of our future. Fortunately, it works.

His fingers thread through my hair. He loves it when I wear it down, loves touching it. Touching me. Yeah. I’m kind of addicted to my boyfriend. It’s getting harder and harder to stop ourselves these days.

“Yeah. And you know the best part of it all?” His eyes hold mine. “Our very own dorm rooms. ”

I laugh. Next year. The dream of it tantalizes me. Me at Juilliard. Zac at NYU. I know I shouldn’t be excited at the prospect of my best friend attending college hundreds of miles away from me, but it’ll be nice not having to worry about hurting Tori’s feelings all the time.

My phone rings. I squeeze out of his arms to see who’s calling me. With a quick glance at Zac, I mouth, Mom.

He lifts an eyebrow. My mom is usually still at work this time of day.

I hesitate before answering. Not because of her demand but because of the tremble in her voice. So unlike Mom. She always talks fast, her words spilling out in a rush. Hours spent bossing people around at her design firm, I guess.

“Is everything all right?” Silence meets my question and then I know everything isn’t all right. “Is it Dad?”

Dad’s home, too? He’s more of a workaholic than Mom. “It’s Mitchell,” I announce, dread pooling inside me. “Is he okay?”

“Yes. Yes. He’s fine,” she says hurriedly, that nervous tremor still there. Maybe even worse than moments before. I hear the rumble of voices in the background and the phone muffles, like Mom’s covering the receiver with her hand so I won’t hear. Then her voice returns to my ear. “Come home. I’ll explain everything when you get here. ”

He stares at me sympathetically. “Mitchell?”

I nod, worry knotting inside me for my brother. What’s he done this time? “Let me just let Mrs. McGary know. ” I stick my head inside the orchestra room. Mrs. McGary is at her desk in the corner talking on the phone. I motion to her but she shakes her head and holds up a finger for me to wait.

Seeing me with Zac in the doorway, Tori heads over. The orchestra room has always been a “no Zac zone,” and I know she likes it that way. “What’s going on?”

Frowning, she touches my arm. “Is everything all right?”

She angles her head, her eyes b
right with concern. “Mitchell?”

Her hand moves up and down my arm in a consoling manner. “It’ll be all right. He’s just going through a phase. He’ll get it out of his system. ”

If that is the case, my older brother has been going through a phase since he was thirteen. And at twenty-one, I am not convinced he is going to grow out of it anytime soon.

“Thanks. ” A quick glance reveals Mrs. McGary still on the phone. “Look, will you let her know—”

“Of course. ” Tori gives my fingers a comforting squeeze. “Go. I’ll head over when practice ends. Want me to pick you up a smoothie on the way? Watermelon?”

“Thanks, but I better pass. I don’t know what’s going down at home. ”

“C’mon. ” Zac takes my hand. I grab my backpack, and together we head upstairs to the classroom level. We pass several friends. Zac keeps us moving when they try to stop us to talk.

Zac’s best friend is the only one who succeeds. A consummate flirt, Carlton never lets me slip by without a hug. “Hey, gorgeous. ”

I step back from his embrace. “Hey. ”

Zac tugs me back to his side. “Nah. Gotta get Davy home. ”

Carlton winks at me. “Cool. See you guys later. ”

“Hey, Bridget,” I call out to the sophomore girl who sits beside me in orchestra. She’s second-chair violin. She jerks to a sudden stop, her hand clutching the railing as she stares at me in almost wonder.

The sophomore nods rapidly, holding still even as we keep climbing. “Hi, Davy. ” Her gaze slides to Zac and her cheeks grow pink. “Hey, Zac. ”

He looks back at her with a blank look. “Hey. ”

I smile a little.

“Why are you smiling?” he asks as we reach the first floor. “You don’t even know her name. ”

He wraps an arm around my waist and pulls me closer against him. “I know your name. ”

His gaze slides over me, and it’s a hot look that makes me all fluttery inside. “I know a few other things about you, too. ”

“You’d like to know a few other things,” I tease.

He gets the door for me and we leave the Academic Building behind, walking along the pebbled path toward the parking lot. There’s a nip to the late afternoon—what consists of a Texas winter making its final stand. Soon it will be so hot that shirts stick to skin, and the air feels like steam.

I’m looking forward to New York. I’ve only seen snow once, ten years ago. It melted almost immediately, just sticking to the rooftops for the day. My brother and I scraped what we could off the lawn into snowballs and stuck them in the freezer, hoping to save them. They resembled dingy, brownish balls of ice with twigs and dried leaves sticking out of them. Mom threw them away before we ever got a chance to recover them from the freezer.

My gaze skims the brown-green hills etched against a sky so blue it hurts your eyes. The headmaster’s white-pillared mansion looks down on us from the top of the hill as we pass the refectory where we eat. A perfectly manicured expanse of green stretches to our left. In the distance, flags slap on the wind, mingling with the soft drone of a golf cart driven by the head of campus security as he rolls toward the practice fields. Everyone calls him “Snappy” because he likes to snap his fingers to get your attention. My brother coined the nickname years ago as a freshman. Snappy busted Mitchell on more than one occasion.

We descend the hill toward the parking lot. Seniors get the best spots. It’s one of our privileges at Everton, in addition to having our very own senior lounge replete with couches, TV, and soda and snack machines. Zac’s parked in the front row beneath a crape myrtle tree in full bloom. Tiny white blossoms decorate the hood of his car.

“Someone needs to cut that thing down. ”

Uninvited by Sophie Jordan / Young Adult / Science Fiction have rating 4.3 out of 5 / Based on47 votes