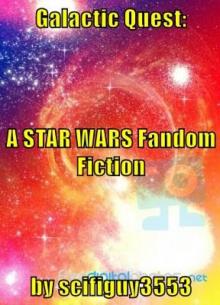 10 years after the Battle for Yavin, and the fall of the Galactic Empire, the New Republic era emerged. This did not necessarily mean peace for the former Rebel Alliance, as Jedi Rin Shander discovered.

Young Jedi Shander decides to go on a quest for his Jedi sabbatical. 'The Galaxy' has never seemed to have been given a proper name, and he intends to find it! That is, until he potentially starts a new war between the New Republic and the Nagai civilization. Little did Shander know, his quest will take him through an Infinity Gate and he would find himself on Cloud City once again...but this time, as a fugitive of the Nagai!

A long time ago, in a galaxy far,

10 ABY. Planet Nagi; within the satellite-galaxy of Companion Besh. Beyond the Outer Rim of the Galaxy:

The Namout Se flashed into existence from Hyperspace just outside of Nagi-proper. The sleek, elongated Nagai starship, with its chevroned-posterior fins, gracefully slid its way to the mottled planet. Mlip, a Nagai piloting the ship, could see the planet's space-traffic coming into view. Given that his passenger had business on Nagi and was coming from the city-planet of Coruscant, Nagi's traffic seemed more like a trickle of ships to and from the ochre and off-white planet.

"Every planet in the Galaxy seems so desolate after leaving Coruscant, huh, Mlip," the young, Human male commented from behind as he walked up to the cockpit area and sat on the co-pilot seat. Mlip had the console to the co-pilot section turned off since it was a relatively short run from the former Imperial capital.

"Indeed, they all do," Mlip said good naturedly. He had the build one would consider to be typical of a male Nagai: tall and wiry. He was wearing a neutral-colored jumpsuit and had his long, black shock of hair in braids and tucked underneath his work-cap, given that he was on the job for his family's business in the transporting sector of Nagi

By contrast, Jedi Rin Shander was slightly short for a male, by human standards, and stocky. His hair was of medium-length and his young face was already clothed in a thick beard that one usually sees on a human male much older than Jedi Shander was...a sure sign that Shander had achieved full-Jedi status when he was even younger!

"Jedi Shander," Mlip put to the young man; dressed in a tunic attire associated with the Order, "would you mind if I were to ask you a question?"

Shander glanced at the pilot, whose eyes remained on the vista of the encroaching planet. "Sure..."

"I respect that you are a Jedi, even at such a young age. And, perhaps, it is because of your age that you may not be in the knowledge of how...secluded we, Nagai, are." At this point, Jedi Shander was already silently nodding to himself, Mlip could see. But he continued. "Do you think it wise for a Human--even a Jedi--to adventure to Nagi by himself?"

Jedi Shander learned a long time ago to let space cushion the area between a question and an answer.

"This is not a junket I'm on, Mlip. I'm taking a sabbatical that we, Jedi, are allotted from time to time. My Master had no problem with me going on a personal quest."

"Mmm," the Nagai said with an approving nod. "Your Master's reputation proceeds him! Of talent, he is truly, fighting off that wicked emperor and his right-hand man...was it not this Jedi Master whom destroyed the first Death Star?"

"He is," Shander said proudly, as if Luke Skywalker were his father. Indeed, in many ways since the fall of the Galactic Empire, Jedi Master Skywalker was the father of a new gathering of young Jedi of late.

"This quest you speak of," the young Nagai carefully spoke after a long pause in their conversation.

Jedi Shander was one of the few Jedi that had interacted with the Nagai and their world as a whole. He understood what Mlip was asking. The Nagai were such a closed society that the only other known Nagai to be associated with the Jedi Order was one called Garn nearly four thousand years ago! And even then, as the ancient Jedi Archives told it, Garn was murdered with other Padawans by some secret cult called the Jedi Covenant.

"Well," Shander decided to say; in truth really wanting to tell Mlip it was none of his business, "I've decided to try to find out what the proper name of the Galaxy is."

Mlip finally turned his head from the Namout Se's dashboard and windows and looked at Jedi Shander. "So, you think you can find it on Nagi?"

"Well, I'd say I believe I can find a clue there...of all my personal researching this with the Jedi Archives and a myriad of other sources, not one of them actually cites a proper name for our large Galaxy! Your ancestors were the closest of any society that has some tangible reference."

Jedi Shander chuckled at Mlip's embarrassment. The Nagai were a bit too proud, he thought. "Well, you can't blame your ancestors for using terminology they had useful for their time... have any idea how long ago since they started using Skyriver?"

"Like everyone else, my guess is thousands of years ago. Most likely before we achieved our system of literature."

At this point, Rin Shander whipped out a tiny data-pad from one of the small pouches ringing his tunic's belt. He then proceeded to enter portions of their conversation into the pad. Mlip began to laugh. Perhaps the most informal the Jedi had seen the pilot since they met days earlier on Coruscant.

"Jedi, are you actually documenting what I just imparted to you?"

Shander looked up from the data-pad. "Well, this quest of mine to discover the Galaxy's name starts with you, my friend. All I do will be for nothing if I do not document all this."

Mlip nodded his head in tacit agreement. Other ships in Nagi's planetary traffic were beginning to thicken up as the Namout Se got closer to the planet.

"Why not simply adopt the name Skyriver," Mlip asked after a pause. "As you know, I don't particularly care for the name. But, as you said previously yourself, Jedi, it is a precedence. I, respectfully, sir, fail to see the purpose of you going to such lengths--all for the sake of discovering the name of a galaxy that has already been given one by a civilization."

" 'Our' galaxy," Jedi Shander interjected. "If we do not have a knowledge of our own place in the universe, Mlip, we do not have a good perspective of ourselves..." Jedi Shander replaced the data-pad back into its pouch; next to where his lightsaber was hooked. "Besides, I didn't want to bring politics into this, but there are some in the galactic core who refuse to use Skyriver as their choice for a galactic nomenclature."

Now, this time it was Jedi Shander's turn to use subtlety. He let his eyes linger on those of Mlip's for a few seconds, then looked away toward the planet as it continued to fill up the ship's entire vista.

"The Nagai's invasion of the galactic core a few years ago..." Mlip sighed as he shook his head. "I fail to see how that should effect whether or not a being in the Galaxy should use the term Skyriver!"

"Well, there's also that situation with...certain among the Nagai who sought to go back to the old days and actually tried to enslave the Wookiee population!"

"Jedi, is that the real reason you are returning to my homeplanet?"

Shander's Jedi senses could feel the Nagai's annoyance turning to more than anger. "No, Mlip. Not at all...as I said earlier, I really did not mean to wonder into the politics of it."

There was silence in the cockpit for a while.

"Would learning a more--pro
per name for the Galaxy help?"

Jedi Shander looked upon Mlip with questioning eyes. The Nagai pushed to clarify.

"Would it help bring, if not peace, some diplomatic cover for other space-powers not to be reminded of my people's aggression into your part of the Galaxy?"

"If they were to use another source to discover the proper name of the Galaxy? Yes."

"But, Jedi, you are not going to another source for an alternate name. You are on your way to Nagi now. So I fail to see how this would help in the political front."

"It would if the Nagai help me," Jedi Shander quickly said, barely talking over Mlip; emphasizing his point.

Mlip was slightly taken aback. He looked at the Jedi for a while, perhaps gauging if such a young Human could be trusted in such inter-galactic politics.

The young Nagai thought hard on it, and nodded his head...both remained silent for the rest of the approach to Nagi.