A Court of Mist and Fury 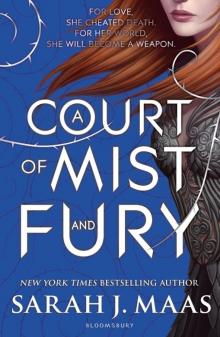 For Josh and Annie—

my own Court of Dreams

PART ONE THE HOUSE OF BEASTS

PART TWO THE HOUSE OF WIND

PART THREE THE HOUSE OF MIST

Maybe I’d always been broken and dark inside.

Maybe someone who’d been born whole and good would have put down the ash dagger and embraced death rather than what lay before me.

There was blood everywhere.

It was an effort to keep a grip on the dagger as my blood-soaked hand trembled. As I fractured bit by bit while the sprawled corpse of the High Fae youth cooled on the marble floor.

I couldn’t let go of the blade, couldn’t move from my place before him.

There was another ash dagger waiting, and another Fae kneeling. Female.

I knew the words she’d say. The prayer she’d recite.

To free them all, to free Tamlin, I would do it.

I was the butcher of innocents, and the savior of a land.

“Whenever you’re ready, lovely Feyre,” Amarantha drawled, her deep red hair as bright as the blood on my hands. On the marble.

I didn’t know who I meant. The lines between me and the queen had long since blurred.

My fingers loosened on the dagger, and it clattered to the ground, splattering the spreading pool of blood. Flecks splashed onto my worn boots—remnants of a mortal life so far behind me it might as well have been one of my fever-dreams these few last months.

I faced the female waiting for death, that hood sagging over her head, her lithe body steady. Braced for the end I was to give her, the sacrifice she was to become.

I reached for the second ash dagger atop a black velvet pillow, its hilt icy in my warm, damp hand. The guards yanked off her hood.

I knew the face that stared up at me.

Knew the blue-gray eyes, the brown-gold hair, the full mouth and sharp cheekbones. Knew the ears that had now become delicately arched, the limbs that had been streamlined, limned with power, any human imperfections smoothed into a subtle immortal glow.

Knew the hollowness, the despair, the corruption that leaked from that face.

My hands didn’t tremble as I angled the dagger.

As I gripped the fine-boned shoulder, and gazed into that hated face—my face.

And plunged the ash dagger into my awaiting heart.

THE HOUSE OF BEASTS

I vomited into the toilet, hugging the cool sides, trying to contain the sounds of my retching.

Moonlight leaked into the massive marble bathing room, providing the only illumination as I was quietly, thoroughly sick.

Tamlin hadn’t stirred as I’d jolted awake. And when I hadn’t been able to tell the darkness of my chamber from the endless night of Amarantha’s dungeons, when the cold sweat coating me felt like the blood of those faeries, I’d hurtled for the bathing room.

I’d been here for fifteen minutes now, waiting for the retching to subside, for the lingering tremors to spread apart and fade, like ripples in a pool.

Panting, I braced myself over the bowl, counting each breath.

Only a nightmare. One of many, asleep and waking, that haunted me these days.

It had been three months since Under the Mountain. Three months of adjusting to my immortal body, to a world struggling to piece itself together after Amarantha had fractured it apart.

I focused on my breathing—in through my nose, out through my mouth. Over and over.

When it seemed like I was done heaving, I eased from the toilet—but didn’t go far. Just to the adjacent wall, near the cracked window, where I could see the night sky, where the breeze could caress my sticky face. I leaned my head against the wall, flattening my hands against the chill marble floor. Real.

This was real. I had survived; I’d made it out.

Unless it was a dream—just a fever-dream in Amarantha’s dungeons, and I’d awaken back in that cell, and—

I curled my knees to my chest. Real. Real.

I mouthed the words.

I kept mouthing them until I could loosen my grip on my legs and lift my head. Pain splintered through my hands—

I’d somehow curled them into fists so tight my nails were close to puncturing my skin.

Immortal strength—more a curse than a gift. I’d dented and folded every piece of silverware I’d touched for three days upon returning here, had tripped over my longer, faster legs so often that Alis had removed any irreplaceable valuables from my rooms (she’d been particularly grumpy about me knocking over a table with an eight-hundred-year-old vase), and had shattered not one, not two, but five glass doors merely by accidentally closing them too hard.

Sighing through my nose, I unfolded my fingers.

I tilted my left hand over, the whorls of dark ink coating my fingers, my wrist, my forearm all the way to the elbow, soaking up the darkness of the room. The eye etched into the center of my palm seemed to watch me, calm and cunning as a cat, its slitted pupil wider than it’d been earlier that day. As if it adjusted to the light, as any ordinary eye would.

I scowled at it.

I hadn’t heard from Rhys in the three months I’d been here. Not a whisper. I hadn’t dared ask Tamlin, or Lucien, or anyone—lest it’d somehow summon the High Lord of the Night Court, somehow remind him of the fool’s bargain I’d struck Under the Mountain: one week with him every month in exchange for his saving me from the brink of death.