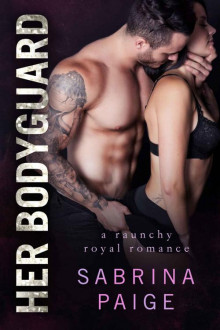 This book is a work of fiction. Any similarity to real events, people, or places is entirely coincidental. All rights reserved. This book may not be reproduced or distributed in any format without the permission of the author, except in the case of brief quotations used for review. If you have not purchased this book or received a copy from the author, you are reading a pirated book.

This book contains mature content, including graphic sex. Please do not continue reading if you are under the age of 18 or if this type of content is disturbing to you.

NOTE: All characters in the book are 18+ years of age and all sexual acts are consensual.

I protect royals – I don't screw them.

She's smart-mouthed, argumentative, and doesn't do a damned thing I say.

And the idea of throwing her over my shoulder like a caveman makes my blood run hot.

She's the ultimate in forbidden – bodyguards don't touch princesses. I could lose everything.

But this is one princess I'll bring to her knees.

My bodyguard is a royal a**.

If there's one thing I can't stand, it's someone telling me what to do.

Yet the idea of him turning me over his knee makes me wet.

Princesses don't hook up with their bodyguards – it's the ultimate transgression.

And they definitely don't fall in love.

Ship to Wreck – Florence and the Machine

Rabbit Heart (Raise It Up) – Florence and the Machine

Leave the Lights On – Meiko

Her Bodyguard is a spin-off of Prince Albert, which hit #1 in the Amazon Kindle store in November 2015, thanks to my awesome fans! I got so many emails asking for a book about Princess Alexandra and her bodyguard Max that I finally decided to write one.

If you haven't read Prince Albert, I’ve included it at the end of this book.

Technically, the books are standalone. This book runs parallel to that one and it does contain spoilers. So if you haven’t read Prince Albert, or if it’s been a while, I’d recommend that one before Her Bodyguard.

I've also included an extra epilogue about Albie and Belle at the end of Prince Albert!

I’ll also be giving away an extra epilogue to the books that checks in with the characters and their families eight years later, just for signing up for my newsletter!

There are more details and a signup link in my newsletter information at the end of this book (in the “Also by Sabrina Paige” section).

If you already subscribe to my newsletter, check your email for a newsletter from me containing the epilogue sometime next week!

P.S. If you haven’t read my books before, they’re pretty filthy. You’ve been warned.

P.P.S. Scroll back a page if you want the book playlist.

I drop to the ground with a thud, still clutching the rappelling rope, and glance over my shoulder behind me. A few meters away, my brother Albie (the Crown Prince of the Kingdom of Protrovia) stands clapping his hands slowly and looking at me with an amused expression. He's flanked on either side by bodyguards wearing suits and sunglasses (the royal security uniform), neither of whom look remotely amused at all.

In fact, they look downright cranky, which is par for the course for the royal bodyguards. I've yet to have one assigned to my personal security who has any sense of humor at all. Albie's bodyguard, Noah, on the other hand, gets along with him quite pleasantly.

That difference may have something to do with the fact that I tend to evade my bodyguards by climbing out of my room.

"Seriously, Alex?" Albie asks. "I don't know why you continue to insist on rappelling down the palace wall from your bedroom. Royal security is obviously onto your tricks."

I unclip my carabiner and step out of my gear before turning to face the three of them. "Well, they are now, obviously," I agree. "But if you hadn't brought him here, I'm certain that my bodyguard would still be standing outside of my room staring at the wallpaper and not realizing I'd even gone. Just like the last time I did this, and the time before that."

"Your current bodyguard quit this morning," Albie informs me. "This is your new bodyguard."

"Again!?" I ask. "For royal security, they really quit a lot, don't they? Shouldn't they be more persistent?"

My brother raises his eyebrows. "Well, your bodyguards quit frequently. Noah has been my bodyguard for years."

I think I hear Albie's bodyguard snort, then he quickly straightens his face.

"Noah doesn't want to die early of a stress-induced coronary," Albie explains, "So he would never agree to being part of your personal security detail."

"On the other hand," I say, gesturing toward the new guy, "this man clearly has a death wish. Is that what you're saying?"

Albie chuckles. "Be nice. I owe that man – and you need him. Dad's already signed off on it."

"Oh, has he? He's done that from whatever country he's jetted off to with the Ice Queen?" I ask. Our father, the king of Protrovia, is dating again. Correction: he's in love. Okay, it's been several years since my mother's death, and it's not like I want my father to be miserable and alone, but still, it's an adjustment. It's not as if my father is a regular person jumping back into the dating pool. He's a king. And Sofia Kensington is an American woman; she's not even Protrovian! More importantly, she's a complete bitch and as unlike our mother as she could be. I can't fathom what my father sees in her.

"They'll be back tomorrow," Albie informs me.

"Alex," Albie warns. "Maybe you should give her a chance."

"Thanks ever so much for the lecture, big brother."

Albie grins. "Maybe also try giving your new security a chance. Don't run this one off like all of your other bodyguards, Alex."

"I've not run off a single member of my security team," I say, feigning innocence. Technically, that's true; I haven't run off just one of them.

"You've run off all of them." Albie finishes the thought for me anyway.

The new bodyguard smirks. "Those other bodyguards weren't me," he scoffs, speaking more casually than a new bodyguard u
sually would in front of the royal family, which makes me wonder exactly how he knows my brother to speak with such familiarity. "I'm not going anywhere."

Albie laughs and shakes his head. "You don't know my sister. Now that you've said that, she's going to consider it her own personal mission to get you to quit."

The new guy is wearing mirrored sunglasses, yet I can feel the intensity of his gaze from behind the lenses. "Well, then," he says, "I'll consider it my own personal challenge to ensure she doesn't achieve that goal."

"I assure you that I always achieve what I put my mind to," I tell the new guy.

Albie clears his throat. "Well, my work here is done. We'll leave the two of you to get to know each other." He and Noah walk off, and I can hear Albie chuckling as he leaves.

"I am, princess," he replies stiffly. He stands perfectly still like a statue, looking forward with his hands balled into fists at his side, a habit he obviously picked up in the military – but not in the Protrovian military. His accent isn't Protrovian at all; I think he might be American. That makes the fact that he was hired to be my bodyguard even stranger, since the job is usually reserved only for Protrovian citizens.

My gaze lingers for a moment too long on the way his suit skims over his obviously fit body before settling on his face. "My last bodyguard, James –" James wasn't his actual name. My bodyguards turn over so frequently that I stopped learning their names a while ago. Now, I simply refer to all of them as James, whether they like it or not. "He lasted three days, I believe. The one before that made it a week. I think the record is two weeks."

"Let me assure you, princess," the new guy says, "you won't get rid of me as easily as one of your prior bodyguards."

I can't help but smile. "Ah, the unbridled optimism of a new employee," I say wistfully. "I do love a challenge, James."

He reaches for his sunglasses and removes them carefully, folding them slowly before looking up at me. When he does, my breath actually catches in my throat. He stares back at me with cool blue eyes, his gaze direct, not obsequious or deferential in any way. He looks at me like an equal – or maybe even like I'm beneath him. The corners of his lips turn up a twinge, ever-so-slightly, making him look smug and condescending. None of my prior bodyguards would have ever dared to look at me like that.

A thrill rushes through me – all the way to my toes – at the prospect of a challenge.

"Max Donnelly," he says. He doesn't look away for a moment, and I can't take my eyes off of him. He’s absolutely breathtaking. He has the kind of strong, chiseled jawline and bright eyes that make him seem like he’s from another generation – a gruff masculinity like a film star from the fifties.

“Excuse me?” I ask, less because I didn't hear what he said and more because I need to shake off the spell he seems to have me under.

Her Bodyguard by Sabrina Paige / Romance & Love have rating 5.6 out of 5 / Based on39 votes