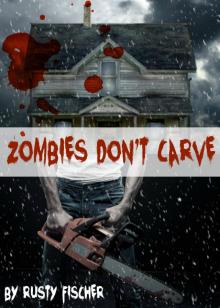 A YA Christmas Story

This is a work of fiction. All of the names, characters, places and events portrayed in this novel are either products of the author’s imagination or, if real, are used fictitiously.

The following is a FREE living dead blind date story. (Say that three times fast, why don’t you?) Any errors, typos, grammar or spelling issues are completely the fault of the zombies. (They’re not very patient with the editorial process!)

Anyway, I hope you can overlook any minor errors you may find; enjoy!

A YA Christmas Story

The engine idles, exhaust pluming in the rearview mirror as we sit, parked in front of my house.

“Babe,” I murmur, caressing his cold skin with my warm hands. (Ooohh, I hope I never tire of that sensation.) “Seriously, it’s going to be fine. They’re not bad people, trust me.”

“I know they’re not ‘bad’ people,” he says, voice a little on the gravelly side. (Just the way I like it!) “They don’t have to be ‘bad’ people to hate zombies. Haven’t you heard? Apparently, it’s America’s last acceptable prejudice!”

He fumes, staring down at his slick brown shoes.

They’re new; I helped him pick them out after the last day of school before Christmas break.

From the looks of it, he’s been polishing them ever since.

I don’t have an answer to that, so I just kind of sit there for a few seconds, willing myself not to look at my watch; we’re already six minutes late.

Not a stretch for most families; for mine, well, we might as well bring Twisted Sister’s Christmas album for the evening’s listening pleasure.

Speaking of, “Have Yourself a Merry Little Christmas” oozes from the radio, some old lady from a long time ago really belting it out; he gives me an ironic smiley face, so I turn it down; then off.

He turns it back on, quietly, and explains, “I was hoping there’d be some news on the latest outbreak before we go in.”

“Last I heard,” I tell him, ignoring the knot in my stomach from the live newscasts I’ve been hearing all morning, “the checkpoints from Thanksgiving were still holding and the governor has doubled the reservists at each hot spot.”

“That’s good,” he says by rote, knowing as I do that what they say in news accounts and what’s really happening on the ground don’t always mesh.

“10 minutes, Echo,” I plead. “Just give them 10 minutes and if you’re not digging it, if they’re even the least bit rude – aside from my little brother Zack, he can’t help it – then we’re out of there, promise.”

“You say that,” he says, sighing and reaching for his seatbelt. “But you don’t really mean it.”

We step out of the car, feet crunching on the mushy snow sliding down the street toward the gutter halfway down the slight hill we live on.

He reaches in back, like the gentleman that he is, and grabs the gaily-colored presents we’d spent hours fighting over in the mall just the other day.

Despite the pasty pallor, he looks downright gorgeous in his thick turtleneck – it hides the bite marks from his run-in with a true zombie on Halloween – and starched wheat-colored chords that hug every curve he’s got, and some even I’ve forgotten he had.

He smells of some musky, spicy cologne he must have bought when I wasn’t around (which could be any day ever since they kicked him out of school for catching “the Z disease”), and as I reach for the gourmet food bag behind my seat, I nuzzle his neck as he stands beside me.

“Stop,” he giggles, breaking his stern mask for the first time all night. “It tickles.”

“Tickles?” I gush, excited by the temperature of his freezing cold skin. “I thought you zombies couldn’t feel anything?”

“Well, I can feel that,” he growls suggestively, forcing me to step away before we start something in the backseat we can’t finish before dinner.

I blush slightly at the ridiculously expensive front lawn display Echo has never seen before, but I’ve been embarrassed about ever since it went up the first week of December.

I still can’t tell if it’s a compliment, or a diss.

I guess at this point it doesn’t really matter; meeting my parents for the first time, he’s entitled to a few sour grapes.

“So this is where you live, huh?” he asks, unable to hide the slight sense of resentment in his tone.

I shake my head and say, “Hon, you know how it is. I’ve been meaning to bring you over, introduce you to the fam it, just, with school and volleyball and college prep, I just… where does the time go, you know?”

He nods before smirking, “Funny, you always seem to have enough time to hang out at my place.”

“Okay, you got me,” I admit, boot heels crunching on the freshly-cleared stoop as we stand in front of the front door, a fresh evergreen wreath tickling my nose. “I’m a jerk, all right? Happy?”

He smiles at my discomfort.

“Getting there,” he oozes, standing nervously next to me as I reach to ring the bell.

While the fading strains of “Jingle Bells” echo in our heads – Dad ordered the custom-made door chime special online – I hear footsteps and Jimbo’s barking in the long front hall.

The door opens and immediately the scent of fresh-baked pie and basting turkey shoots out of the house like fresh balls from a cannon.

“Yumm,” he says instinctively as I watch the faces of my family closely.

The door wide open now, nothing to hide, my zombie boyfriend standing right by my side, Dad frowns sternly, as if I’d shown up at the front door with a tattoo-covered biker named “Booger.”

Mom, naturally, keeps her “It’s the holidays, I must maintain my composure at all costs” face plastered on, blinking rapidly and clutching tight to Dad’s bright red Christmas sweater.

My younger brother, Zack, smiles in a way that says, “Wow, this night just got a whole lot funner.”

And Jimbo, our intrepid German shepherd who’s been known to bark nonstop at our 6’ 7”, 300-pound mail carrier without ever once backing down, takes one look at Echo and promptly puts his tail between his legs, scurrying into the den.

“Mom? Dad?” I begin nervously, hating the catch in my throat. “This is Echo, my… boyfriend.”

He grins despite himself behind the tower of presents and croaks, “Merry Christmas!”

The house is alive with fireplace glow and flickering candles and the 7-foot, pre-lit tree.

Echo takes it all in; it’s quite a contrast from the two-bedroom apartment he shares with his workaholic Dad, who even seven weeks after the attack still doesn’t know his own son is one of the living dead.

“Wow,” he says while my family stands around looking speechless. “You have a great place here, Mr. and Mrs. Kersey.”

“Why, thank you… Echo,” says Mom as he sets the presents down at the border
of the huge stack already under the tree. “And you’re so kind; you didn’t have to bring anything.”

Echo and I wink at each other; wait until they open the presents and see what’s inside.

But then, hopefully, we won’t have to.

I shut the door uneasily behind us, taking one last look into the street for any signs of rampant zombie infestation.

So far, so good, although I notice extra locks and plenty of high security house lights on the neighbor’s homes.

The dinner table is already set and Dad busies himself making sure everyone is in the right spot.

Old school ‘til the end, I can’t even sit next to Echo, but must face him from across the decked out table as Zack pokes his fork into my thigh under the table and whispers, “He doesn’t look that bad, for a zombie I mean!”

I shoosh him as Mom pours me a half-sip of champagne.

Mom pours some for Echo, too, who politely says, “Thank you, ma’am,” even though of course he can’t drink it; can’t drink anything, that is, except for the rare sip of brain juice that runs off his main dietary supplement.

“Oh please,” she blushes to hear such manners – my last boyfriend used to honk