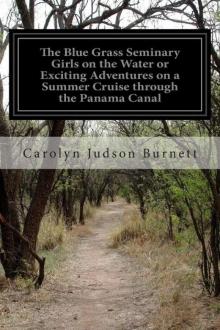 Produced by Roger Frank and the Online DistributedProofreading Team at https://www.pgdp.net

"I AM SORRY YOU INTERFERED WITH US," SAID THE MAN."YOU'LL FIND BEFORE LONG THAT YOU HAVE DONE WRONG." _Page 57_.]

The Blue Grass Seminary Girls On the Water

Exciting Adventures on a Summer Cruise Through the Panama Canal

THE BLUE GRASS SEMINARY GIRLS ON THE WATER

THE BLUE GRASS SEMINARY GIRLS ON THE WATER.

The speaker was Shirley Willing, a typical Kentucky girl, slender offigure, vivacious of manner, and extremely pretty. With her father, shestood on the big, sunny front porch of the Willing farmhouse. As sheagain was about to address her father, a second young girl, who, itcould be seen at a glance, was of about Shirley's years, joined them.

This was Mabel Ashton, Shirley's particular friend and life chum.Shirley greeted her with a smile, and Mr. Willing's face also wrinkledpleasantly.

"I was just telling Dad that we want to take a trip this summer,"explained Shirley.

"We have talked it all over," she agreed, "and we just want to go someplace."

"Why, we--we--want to go to--to--where is it we want to go, Shirley?"asked Mabel in some confusion.

"We hadn't decided on that yet, Dad," laughed Shirley. "But we don'twant to stay here on this old farm all summer."

"And what are you going to do with both your old Dads--leave thembehind?" asked Mr. Willing seriously.

"We would like to have you go with us, Dad, but we know you won't."

"It's never too late to mend our ways," declared her father dryly."Perhaps we shall this time."

Both girls clapped their hands, and scampered about the porch eagerly.At last Shirley stopped her antics, and standing directly before herfather, took him by the coat with both hands.

"Yes. Ashton and I have decided that the next time you two youngsters goaway from home we are going with you. When you are by yourselves you getinto too much mischief. Now where is it you want to go?"

"We haven't the slightest idea," was the reply.

"You call your father out here and we'll talk this thing over," he toldher.

Mabel hastened to obey, and while she is searching for her father, weshall take time to introduce Shirley Willing and Mabel Ashton more fullyto the reader.

The two girls had been friends ever since they could remember. Born andraised within a few doors of each other in the little town of Paris,Bourbon county, Kentucky, they had been inseparable companions from thetime they were able to walk. This friendship was strengthened by thefact that their fathers had been bosom friends before them.

While the girls were still young, Shirley's mother died, and a shorttime later Mr. Willing purchased a large farm on the Bethlehem Pike,three miles from town. It was less than a year later that Mabel's motherpassed into the great Beyond, and Mr. Ashton bought a farm adjoiningthat of his old friend. And here they had lived ever since.

When Shirley reached the age of fourteen, she conceived the idea ofgoing away to school. Mabel announced that she was going with her. Theobjections of their fathers they soon overcame, and at last foundthemselves installed as pupils of the Bluegrass Seminary in Lexington.Here, because of their kind-heartedness and their many good deeds, theywere soon among the most popular girls of the school.

Being athletically inclined, they were prominent in all branches ofgirls' sports. Their chief pleasure was horseback riding, in which artthere were few more proficient. In fact, Shirley once had saved herfather's fortune by carrying the Willing colors to victory in the greatKentucky Derby, as related in "The Bluegrass Seminary Girls onVacation."

Naturally modest, they nevertheless had been made, soon after theirarrival at the seminary, members of the Glee Club, for it was found thatboth possessed voices of rare excellence. During the second Christmasvacation, with other members of the Glee Club, they had toured thelarger eastern cities, and through entertainments had lifted a largedebt that threatened the end of the Seminary.

Both girls also possessed great courage, as they had proved on more thanone occasion, and they had had many exciting adventures, one of the mostimportant of which was the settling of a mountain feud in which they hadfaced great danger unflinchingly, as related in "The Bluegrass SeminaryGirls on Motorcycles."

The summer vacation now had just begun. Shirley and Mabel had returnedfrom Lexington two days before this story opens. At the Willing placethey found Mr. Ashton, who had been very ill for some years, and hadbeen making his home with his friend while his daughter was away atschool.

But now Mr. Ashton was greatly improved, as Mabel found to her greatjoy. He was gaining daily and recovering lost weight and strength.

Mabel, searching for her father in response to Mr. Willing's request,found him in the sitting room. She went up to him and took him by thehand.

Mr. Ashton--"colonel" he was always called by his friends--allowedhimself to be pulled toward the door.

"Mr. Willing, Shirley and I want to have a talk with you," was thereply.

"H-mm-m," muttered the colonel, "must be something you two want. Haveyou succeeded in twisting Willing around your fingers?"

"The idea, Dad!" exclaimed Mabel. "You know neither Shirley nor I wouldthink of trying to do a thing like that."

Father and daughter made their way to the front porch, where Shirley andher father were deep in conversation. Colonel Ashton dropped into achair, and Mabel sat down at his feet.

"Ashton," said Mr. Willing, "these girls say they want to go some place.What do you think about it?"

Mr. Ashton was silent for some moments. He did not seem to be surprised.

"Where do they want to go?" he asked at length.

"And," Shirley broke in, "my Dad says you and he might come with us."

Mr. Ashton looked at his old friend in surprise.

"You say that, Willing?" he demanded.

"Yes, Colonel, I did. Why not, eh? You and I are getting along in yearsand have earned a vacation. I'm agreeable, if you are."

"I don't know but you are right," was the slow reply. "I guess I am wellenough to travel. I'll go."

Mabel jumped quickly to her feet, and hugged him. Shirley performed asimilar operation on her father.

"Then," said Mr. Willing, disengaging himself at last, "the onlyquestion to be settled is, where shall we g
o?"

"This is a pretty sizeable country, Willing," said the colonel, "I guessthere are plenty of places to go."

"I had thought of Atlantic City," said Mabel.

"And what had you thought of?" demanded Mr. Willing of Shirley.

"Well," was the reply, "there were two things I wanted to do, and Idon't know which I shall choose."

"You know, Dad, ever since Mabel and I went away with the Glee Club, wehave both been anxious to take a trip on one of the big ocean steamers.That is one thing I would like to do."

"Any place. Across the ocean."

"Well, we won't do that," said Colonel Ashton. "This European war makesit too risky. We might be sunk by one of those German submarines."

"Right, Colonel," agreed Mr. Willing. He turned again to Shirley, "andthe other thing you would like to do?" he questioned.

"I should like to go to the Panama Exposition in San Francisco."

Mabel jumped to her feet and clapped her hands.

"That's where I should like to go, too," she cried. "Why didn't I thinkof it before?"

"Well," he said at length, "I don't know why we can't do both of thosethings, Shirley."

"But the ocean trip, Dad. Where would we go?"

"To San Francisco," was the reply.

"You must remember that the Panama Canal is open to traffic, daughter,"explained Mr. Willing. "We can take a steamer from New York direct toSan Francisco. Besides, I should like to have a look at the canal, withits great locks and other interesting things. The construction of thecanal is considered one of the greatest of all feats of engineering."

"I should like to take that trip myself," he declared.

"Then we shall consider that matter settled," said Mr. Willing.

"And when can we start, dad?" asked Shirley eagerly.

"Well, we will not be able to leave here for a week or ten days. I havesome business affairs that must be put in order before I can get away.Besides, you two girls will want clothes and things, and you can't getthose in a minute."

"We'll go to town this afternoon and get some things," declared Mabel.

"All right," laughed Mr. Willing, "but just the same it will take you atleast a week to get yourselves ready. Then I shall have to makearrangements for our passage, find out when we leave New York and attendto other details. It will take time."

"But we shall go as soon as possible, Dad?" asked Shirley.

"Yes," was the reply. "You may make sure of that. We shall go as soon aspossible. Hello--who's that?"

The others gazed in the direction of his pointing finger. Through thepike gate, at that moment, came a solitary horseman.

"I wonder who he is?" exclaimed Shirley.