Home » Rick Riordan » The Son of Neptune
←Home
The son of neptune, p.1 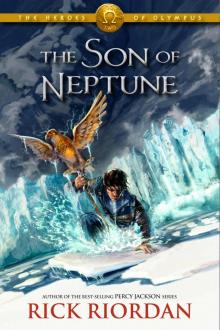 THE SNAKE-HAIRED LADIES WERE starting to annoy Percy.

No matter how many times Percy killed them and watched them crumble to powder, they just kept re-forming like large evil dust bunnies. He couldn’t even seem to outrun them.

He reached the top of the hill and caught his breath. How long since he’d last killed them? Maybe two hours. They never seemed to stay dead longer than that.

The past few days, he’d hardly slept. He’d eaten whatever he could scrounge—vending machine gummi bears, stale bagels, even a Jack in the Crack burrito, which was a new personal low. His clothes were torn, burned, and splattered with monster slime.

He’d only survived this long because the two snake-haired-ladies—gorgons, they called themselves—couldn’t seem to kill him either. Their claws didn’t cut his skin. Their teeth broke whenever they tried to bite him. But Percy couldn’t keep going much longer. Soon he’d collapse from exhaustion, and then—as hard as he was to kill, he was pretty sure the gorgons would find a way.

He scanned his surroundings. Under different circumstances, he might’ve enjoyed the view. To his left, golden hills rolled inland, dotted with lakes, woods, and a few herds of cows. To his right, the flatlands of Berkeley and Oakland marched west—a vast checkerboard of neighborhoods, with several million people who probably did not want their morning interrupted by two monsters and a filthy demigod.

Farther west, San Francisco Bay glittered under a silvery haze. Past that, a wall of fog had swallowed most of San Francisco, leaving just the tops of skyscrapers and the towers of the Golden Gate Bridge.

A vague sadness weighed on Percy’s chest. Something told him he’d been to San Francisco before. The city had some connection to Annabeth—the only person he could remember from his past. His memory of her was frustratingly dim. The wolf had promised he would see her again and regain his memory—if he succeeded in his journey.

Should he try to cross the bay?

It was tempting. He could feel the power of the ocean just over the horizon. Water always revived him. Salt water was the best. He’d discovered that two days ago when he had strangled a sea monster in the Carquinez Strait. If he could reach the bay, he might be able to make a last stand. Maybe he could even drown the gorgons. But the shore was at least two miles away. He’d have to cross an entire city.

He hesitated for another reason. The she-wolf Lupa had taught him to sharpen his senses—to trust the instincts that had been guiding him south. His homing radar was tingling like crazy now. The end of his journey was close—almost right under his feet. But how could that be? There was nothing on the hilltop.

The wind changed. Percy caught the sour scent of reptile. A hundred yards down the slope, something rustled through the woods—snapping branches, crunching leaves, hissing.

For the millionth time, Percy wished their noses weren’t so good. They had always said they could smell him because he was a demigod—the half-blood son of some old Roman god. Percy had tried rolling in mud, splashing through creeks, even keeping air-freshener sticks in his pockets so he’d have that new car smell; but apparently demigod stink was hard to mask.

He scrambled to the west side of the summit. It was too steep to descend. The slope plummeted eighty feet, straight to the roof of an apartment complex built into the hillside. Fifty feet below that, a highway emerged from the hill’s base and wound its way toward Berkeley.

Great. No other way off the hill. He’d managed to get himself cornered.

He stared at the stream of cars flowing west toward San Francisco and wished he were in one of them. Then he realized the highway must cut through the hill. There must be a tunnel…right under his feet.

His internal radar went nuts. He was in the right place, just too high up. He had to check out that tunnel. He needed a way down to the highway—fast.

He slung off his backpack. He’d managed to grab a lot of supplies at the Napa Bargain Mart: a portable GPS, duct tape, lighter, superglue, water bottle, camping roll, a Comfy Panda Pillow Pet (as seen on TV), and a Swiss army knife—pretty much every tool a modern demigod could want. But he had nothing that would serve as a parachute or a sled.

That left him two options: jump eighty feet to his death, or stand and fight. Both options sounded pretty bad.

He cursed and pulled his pen from his pocket.

The pen didn’t look like much, just a regular cheap ballpoint, but when Percy uncapped it, it grew into a glowing bronze sword. The blade balanced perfectly. The leather grip fit his hand like it had been custom designed for him. Etched along the guard was an Ancient Greek word Percy somehow understood: Anaklusmos—Riptide.

He’d woken up with this sword his first night at the Wolf House—two months ago? More? He’d lost track. He’d found himself in the courtyard of a burned-out mansion in the middle of the woods, wearing shorts, an orange T-shirt, and a leather necklace with a bunch of strange clay beads. Riptide had been in his hand, but Percy had had no idea how he’d gotten there, and only the vaguest idea who he was. He’d been barefoot, freezing, and confused. And then the wolves came. . . .

Right next to him, a familiar voice jolted him back to the present: “There you are!”

Percy stumbled away from the gorgon, almost falling off the edge of the hill.

It was the smiley one—Beano.

Okay, her name wasn’t really Beano. As near as Percy could figure, he was dyslexic, because words got twisted around when he tried to read. The first time he’d seen the gorgon, posing as a Bargain Mart greeter with a big green button that read: Welcome! My name is STHENO, he’d thought it said BEANO.

She was still wearing her green Bargain Mart employee vest over a flower-print dress. If you looked just at her body, you might think she was somebody’s dumpy old grandmother—until you looked down and realized she had rooster feet. Or you looked up and saw bronze boar tusks sticking out of the corners of her mouth. Her eyes glowed red, and her hair was a writhing nest of bright green snakes.

The most horrible thing about her? She was still holding her big silver platter of free samples: Crispy Cheese ’n’ Wieners. Her platter was dented from all the times Percyhad killed her, but those little samples looked perfectly fine. Stheno just kept toting them across California so she could offer Percy a snack before she killed him. Percy didn’t know why she kept doing that, but if he ever needed a suit of armor, he was going to make it out of Crispy Cheese ’n’ Wieners. They were indestructible.

Percy fended her off with his sword. “Where’s your sister?”

“Oh, put the sword away,” Stheno chided. “You know by now that even Celestial bronze can’t kill us for long. Have a Cheese ’n’ Wiener! They’re on sale this week, and I’d hate to kill you on an empty stomach. ”

“Stheno!” The second gorgon appeared on Percy’s right so fast, he didn’t have time to react. Fortunately she was too busy glaring at her sister to pay him much attention. “I told you to sneak up on him and kill him!”

Stheno’s smile wavered. “But, Euryale…” She said the nameso it rhymed with Muriel. “Can’t I give him a sample first?”

“No, you imbecile!” Euryale turned toward Percy and bared her fangs.

Except for her hair, which was a nest of coral snakes instead of green vipers, she looked exactly li
ke her sister. Her Bargain Mart vest, her flowery dress, even her tusks were decorated with 50% off stickers. Her name badge read: Hello! My name is DIE, DEMIGOD SCUM!

“You’ve led us on quite a chase, Percy Jackson,” Euryale said. “But now you’re trapped, and we’ll have our revenge!”

You’re going native! Now, put down that ridiculous tray and help me kill this demigod. Or have you forgotten that he’s the one who vaporized Medusa?”

Percy stepped back. Six more inches, and he’d be tumbling through thin air. “Look, ladies, we’ve been over this. I don’t even remember killing Medusa. I don’t remember anything! Can’t we just call a truce and talk about your weekly specials?”

Stheno gave her sister a pouty look, which was hard to do with giant bronze tusks. “Can we?”

“No!” Euryale’s red eyes bored into Percy. “I don’t care what you remember, son of the sea god. I can smell Medusa’s blood on you. It’s faint, yes, several years old, but you were the last one to defeat her. She still has not returned from Tartarus. It’s your fault!”

Percy didn’t really get that. The whole “dying then returning from Tartarus” concept gave him a headache. Of course, so did the idea that a ballpoint pen could turn into a sword, or that monsters could disguise themselves with something called the Mist, or that Percy was the son of a barnacle-encrusted god from five thousand years ago. But he did believe it. Even though his memory was erased, he knew he was a demigod the same way he knew his name was Percy Jackson. From his very first conversation with Lupa the wolf, he’d accepted that this crazy messed-up world of gods and monsters was his reality. Which pretty much sucked.

“How about we call it a draw?” he said. “I can’t kill you. You can’t kill me. If you’re Medusa’s sisters—like the Medusa who turned people to stone—shouldn’t I be petrified by now?”

“Heroes!” Euryale said with disgust. “They always bring that up, just like our mother! ‘Why can’t you turn people to stone? Your sister can turn people to stone. ’ Well, I’m sorry to disappoint you, boy! That was Medusa’s curse alone. She was the most hideous one in the family. She got all the luck!”

Stheno looked hurt. “Mother said I was the most hideous. ”

“Quiet!” Euryale snapped. “As for you, Percy Jackson, it’s true you bear the mark of Achilles. That makes you a little tougher to kill. But don’t worry. We’ll find a way. ”

“Achilles,” Stheno said cheerfully. “Oh, he was gorgeous! Dipped in the River Styx as a child, you know, so he was invulnerable except for a tiny spot on his ankle. That’s what happened to you, dear. Someone must’ve dumped you in the Styx and made your skin like iron. But not to worry. Heroes like you always have a weak spot. We just have to find it, and then we can kill you. Won’t that be lovely? Have a Cheese ’n’ Wiener!”

Percy tried to think. He didn’t remember any dip in the Styx. Then again, he didn’t remember much of anything. His skin didn’t feel like iron, but it would explain how he’d held out so long against the gorgons.

The Son of Neptune by Rick Riordan / Young Adult / Fantasy have rating 5.4 out of 5 / Based on59 votes