Home » Rebecca Donovan » Out of Breath
←Home
Out of breath, p.1 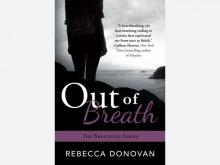 ‘I DON’T EVEN KNOW WHY I BOTHERED picking up. Yeah, maybe I’ll talk to you about it eventually, after you stop acting like such an ass. ’ I stood at the top of the stairs with a heavy box of textbooks balanced in my arms. Sara released a frustrated groan, so I assumed she’d hung up.

I made some noise as I neared the door so she’d know I was coming and could hold her temperament in check. She’d told me about her decision to end things with Jared, and I’d listened. But I was basically incapable of offering any guidance. Sara didn’t confide in me too much lately, afraid something would upset me. It wasn’t that I was that fragile. I just refused to talk about … anything.

‘Is that it?’ Sara asked, her smile brighter than usual, overcompensating for the annoyance that still lingered in her eyes.

‘You can tell me, you know,’ I offered, trying to be the friend that she needed right now.

‘No, I can’t,’ she said, redirecting her attention to the boxes stacked all over the room. ‘I don’t have much space to work with. This room is tiny. ’

I let her avoid the topic, since that was what she preferred.

‘I don’t need anything. Really. No need to bother. ’

‘I thought you’d say that,’ Sara replied with a small smile. ‘That’s why I only brought one thing to decorate your room. ’ She reached for a purse so big it could honestly be called a duffle bag, and pulled out a frame. Flipping it around, she held it up under her chin with a beaming smile. It was a picture of us at her house, in front of the large bay window overlooking the front yard in the background. Anna, her mother, had taken it during the summer I’d lived with them. From the gleam in our eyes it was apparent we were on the verge of laughing.

‘Omigod,’ Sara said with a shocked seriousness. I tightened my eyes in confusion. ‘Is that a smile I see on your face, Emma Thomas? I was wondering if I’d ever see one again. ’

I ignored her, straightening my lips, and turned towards the built-in desk in the corner of the small bedroom.

‘Perfect. ’ Sara set the photo on the dresser, admiring it. I pulled out the textbooks and tucked them on the shelf under the desk. ‘Okay, let’s unpack you. I’m so happy you’re out of the dorms now. And I’ve always loved Meg … and Serena, even though she won’t let me do a makeover. I’ll work on it. But what’s up with Peyton?’

‘She’s harmless,’ I said, breaking down an empty cardboard box.

‘I guess every house needs drama,’ Sara noted, laying a stack of folded shirts in an open drawer. ‘And as long as Peyton’s the only drama in this house, I can live with that. ’

‘That’s what I was thinking,’ I replied, hanging clothes in the minuscule closet.

Sara plopped a black boot box on the bed. ‘Should we keep the boots in the box or set them in the closet?’ She began to slide the cover off, but my hand slammed it shut. She jumped and looked up at me in alarm.

‘They’re not boots. ’ I could hear the edge in my voice.

Sara’s mouth opened in surprise as she took in my intense expression. ‘O-kay. Where do you want it?’

‘I don’t care. I’d actually rather not know,’ I answered. ‘I’m getting something to drink. Do you want anything?’

When I returned with the two bottles of water a few minutes later, Sara was making the bed, and the box was gone. Setting my shoes on the bottom of the closet floor was the final touch. There was a benefit to not owning much.

I sat on the rolling chair at the desk while Sara lay on her stomach on the bed, scattering the display of decorative pillows she’d just masterfully assembled. I knew I’d stuff them on the top shelf of my closet after she left.

‘You know I ended it because I can’t do the distance thing, right?’ Sara asked. I spun the chair around, surprised she’d decided to open up.

‘I know it’s hard for you. It always has been,’ I replied. She’d had the same challenge in high school when we were in Connecticut and Jared was attending Cornell in New York. But she made it work by visiting him practically every weekend for the last part of our senior year.

‘I’ll be in France; there’s no way I could do that to us,’ she continued. ‘It doesn’t seem fair to make him wait. ’

‘But would you want him seeing anyone else while you’re gone? Because that’s basically what you’re giving him permission to do. And then what happens when you get back?’

Sara was quiet, resting her chin on her hands with her eyes focused on the floor. ‘I just don’t want to know about it. And if I meet someone in Paris, he doesn’t need to know about that either. Because in the end, I know we’re supposed to be together. But I’m not sure either one of us is ready to admit that. ’

I still didn’t understand her logic, but I wasn’t about to challenge her.

She sat up suddenly, not allowing me the chance to say anything in return. ‘So, do you think … since I’m going to be gone … that I can let Meg know a little about you? Not everything, just enough so she’ll be here for you while I can’t be. I hate the thought of being so far away without someone –’

‘Looking out for me,’ I finished.

‘Yeah,’ she replied, smiling gently. ‘I don’t want you to be alone. You have a tendency to shut yourself off for days at a time. It’s not good. I’ll still call you every day, of course. But I hate not being close … in case you …’ Sara looked down, unable to finish the sentence.

‘Sara, I’m not going to do anything,’ I promised feebly. ‘You don’t have to worry about me. ’

‘BONNE ANNÉE!’ SARA SHOUTED THROUGH the phone. Music and voices exploded around her, making it difficult to hear her clearly. It could also have been that she was calling from Paris, and the reception wasn’t the best.

‘Happy New Year to you too,’ I replied loudly. ‘Although it’s still last year here for another nine hours. ’

‘Well, I’m telling you next year is looking pretty frickin’ fabulous from where I’m standing! This party is insane. Designer drunks,’ she giggled, her own sobriety in question. ‘And I designed my own dress just for tonight. ’

‘I’m sure it’s impressive. I wish I could see it. ’ I wondered if we really needed to keep yelling to be heard, but she didn’t retreat to anywhere quieter. I sucked it up because I wanted to hear her voice, even in her current giggly mood. I hadn’t heard it enough since she’d started the exchange programme in France in the fall.

She’d spent last summer and every break during our freshman year in California with me. Knowing I was going to see her every few months almost made life bearable. So far, my sophomore year sucked. If it weren’t for my room-mates, I wouldn’t do anything outside of soccer and school.

‘You’re not going to lock yourself in your room like you did last New Year’s Eve, are you?’

‘The door won’t be locked, but I am staying in my room,’ I confirmed. ‘Where’s Jean-Luc?’

‘Getting us a bottle of champagne. I’m sending you a picture of my dress as soon as we hang up. ’

‘Umm, I think she heard you,’ I told Sara, wiggling a finger in my ringing ear, ‘but now I can’t. ’ Meg smiled.

‘Well, I have to go,’ Sara yelled above a roar of laughter. ‘My man and champagne have arrived. I’ll call you tomor
row. Love you, Em!’

‘It sounds like she’s having an incredible New Year,’ Meg remarked, sitting down on my bed. ‘I could hear the party all the way across the room. ’

‘What time are you leaving?’ I asked, knowing she was meeting up with some friends in San Francisco to celebrate.

‘In an hour. We’re all supposed to go out for dinner before the party. ’

My phone chimed, and an image of Sara filled my screen. She looked stunning, of course, in a shimmery dark green sleeveless dress that had a twenties flapper-girl flair, her shoulders dramatically exposed before it swept up into a high collar. Her wavy red hair was twisted back at the nape of her neck. She was puckering her shiny red lips, her eyes smouldering as Jean-Luc kissed her on the cheek while clutching a bottle of champagne.

I shared the picture with Meg. ‘Sexy. Did she design that dress?’

I placed the phone on my desk next to my laptop as Meg asked, ‘Do you mind if I borrow your black boots?’

‘Go for it. ’ I turned back towards my screen to continue downloading the required reading for the next quarter. ‘They’re in the box under my bed. ’

‘You can still change your mind and come with me,’ Meg offered. I could hear the box sliding along the carpet.

‘Thanks, but I’m all set,’ I told her. ‘I’m not really a New Year’s fan. ’ I tried to keep my tone flat, not allowing the reasons why to reflect in my voice. The last time I’d celebrated, the year had held promises of happiness and a future I wanted to be a part of. Now, it was just another page torn from the calendar.

‘Em, I’m begging you one more time. Please, please, please go with me tonight,’ Peyton grovelled from my doorframe. ‘I really don’t want to go with Brook. You never go out with me and it’s New Year’s. Make an exception this one time!’

I spun around in my chair to decline for the thousandth time. Before I could utter a word, her eyes lit up, with her attention direction towards Meg. ‘Ooh, what’s that?’

I followed her inquisitive expression as she walked into the room. Meg had just removed the cover to the box that was set on my bed. The wrong box. A vapour of memories and unfathomable heartache was released into the room as the box opened. I couldn’t breathe.

Meg ripped the white T-shirt with the blue handprints out of Peyton’s hands as she held it up.

‘Stop it, Peyton!’ Meg scolded. I remained paralysed as she flaunted my past in front of me.

Still not doing a very good job fading. His voice flitted through my head, sending a chill down my back.

‘I love this,’ Peyton admired, shaking out my pink sweater. ‘Can I have it?’

‘No! Knock it off, Peyton!’ Meg snatched the sweater and placed it back into the box. ‘Sorry, Em. ’

Out of Breath by Rebecca Donovan / Young Adult / Romance & Love have rating 4.1 out of 5 / Based on45 votes