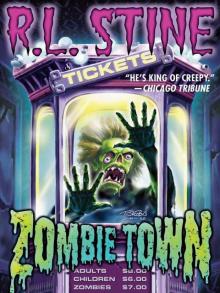 Other Books by R.L. STINE

• It’s the First Day of School…Forever!

• The Creatures from Beyond Beyond

• Three Faces of Me

The characters and events portrayed in this book are fictitious. Any similarity to real persons, living or dead, is coincidental and not intended by the author.

No part of this book may be reproduced, or stored in a retrieval system, or transmitted in any form or by any means, electronic, mechanical, photocopying, recording, or otherwise, without express written permission of the publisher.

Do you stay awake nights worrying about zombies? Do you hear sounds outside your window late at night and picture dead people crawling out of their graves and marching…marching and staggering toward your house to grab you, suck out your brain, and eat your flesh?

No. You don’t worry about that, and I don’t either—most of the time.

But when I was a kid, there was an old graveyard between my house and my school. It would have been faster to walk through the graveyard on my way to school, but I always walked around it. That’s because I could picture those rotting bodies coming up from under the ground, just waiting to grab me.

I knew there must be some people who think about zombies. There have been hundreds of stories and poems and books and movies and TV shows. And today zombies are more popular than ever.

The living dead are living it up big time! Everywhere you look, the undead are staggering around with their arms stretched out in front of them, drooling for fresh human flesh. Zombies might even be able to win a popularity contest against the all-time horror champions—vampires.

We know that more than two thousand years ago, people wrote poems about the dead returning to life. When they came back, the dead people weren’t nice anymore. They were evil—and hungry—just like the zombies we see in movies and on TV.

I’ve always loved reading books about the tough sailing warriors known as Vikings. In Viking days, there were legends written about living dead people called Draugrs. These characters rose up from their graves like wisps of smoke. Then they took human form and grew as large as they wished.

My favorite holiday is Halloween. Did you know that Halloween started because long ago people believed that one day a year at the end of the fall harvest, the spirits would return to walk the earth? On that day, people wore masks so the spirits wouldn’t recognize them.

So next Halloween when you put on your mask maybe you want to say thank you to the walking dead. If superstitious people hadn’t been so scared of zombies, we wouldn’t have any Halloween candy!

The scariest zombies I ever saw were in George A. Romero’s film Night of the Living Dead. The movie’s slogan proclaimed: They Won’t Stay Dead! The zombies in this film were an army of ghouls—dozens of ugly dead people staggering forward, desperate to grab living humans and eat their brains and their flesh.

Audiences were stunned into silence. There had been scary horror movies for many years, ever since movies were invented. But the hideous, decaying zombies in this film were too real. Adults screamed. Kids cried.

People were upset, but zombies were here to stay. There have been six Living Dead films and dozens of other movies and TV shows in which the dead return to stagger and grunt and satisfy their endless hunger.

A lot of those zombies have staggered their way into Zombie Town. I got the idea for this book while sitting in a dark movie theater.

Jane and I sat down in a middle row and waited for the film to start. We stared at the red curtain that covered the screen, talked, and shared a bucket of popcorn.

After a while, I had a funny feeling. I turned around and realized no one was sitting behind us. I gazed around the whole theater, and I quickly saw that we were the only two people there. This enormous movie theater was empty except for Jane and me.

The doors closed. The lights went down. The theater became very dark. The curtain squeaked as it started to slide open.

I felt a chill at the back of my neck. Being alone in the dark in this huge auditorium was creeping me out. My imagination whirred into overdrive, and I started asking myself scary questions…

Why are we the only ones here? Is this some kind of trap?

What if the doors are locked? What if we’re locked in here?

It’s too dark and too quiet. Something HORRIFYING is about to happen.

And that’s where this book starts. With two kids, Mike and Karen, locked in a dark movie house…and something HORRIFYING is about to happen.

I sat on my front steps and stared up at the sky. Dark clouds rolled low overhead. Thunder rumbled in the distance.

I sighed. Why couldn’t it be sunny?

“It’s so not a good day for skateboarding,” Karen said.

“Right,” I agreed. “But we could hang out and play Diablo III on my new laptop.”

“We already played it at least a hundred times,” she complained. She grabbed my arm. “Come on, Mike! We have to do this!”

I sighed again. Karen is my best friend. She lives across the street from me, and we almost always hang out together on Saturdays. Since we couldn’t skateboard today, we were trying to decide what to do.

Actually, I was the only one trying to decide. Karen already knew.

Zombie Town is a horror movie. A terrifying horror movie about a bunch of hideous, flesh-eating zombies who take over a whole town. No one escapes. The zombies eat almost everyone. The survivors get turned into zombies.

Everyone at our school is dying to see Zombie Town. Everyone except me.

“It’s going to be really gross, you know,” I reminded her. “All those decaying zombies eating people and tearing out their guts.”