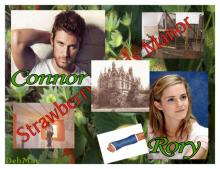 "Rory's a boy's name," the mean little boy who'd pushed her off the swing only seconds earlier, announced as he glared down at her accusingly.

Never taking her eyes away from the bully, Rory slowly got up as she wiped dirt off her shirt and jeans. When she finally stood up all the way she was forced to tilt her head back slightly so that she could continue to glare at him the way her older brothers had taught her.

"It's a girl's name," she said, taking a deep breath and shoving him back.

One thing she'd learned, thanks to having five older brothers, was never to let anyone push her around. Once you did, you'd have to sleep with one eye open and keep an eye out for snakes in your bed, spit in your cereal, and toe nails in your mac and cheese. She might have to put up with five big bullies at home, but that didn't mean that she was going to put up with it at preschool, she decided as she gave the boy that had all the girls giggling and calling cute, another shove.

"You're ugly!" he practically sneered as he reached over and pulled one of her pigtails, hard.

"Well, you smell like my brother's butt!" she said, shoving him hard, cause she really couldn't call him ugly since he was kind of cute with honey blonde hair and green eyes.

"Well, you look like my uncle's butt!" he said, yanking the other pigtail hard enough to make her eyes sting.

"That's enough of that!" Mrs. Fitzpatrick, the mean woman her father left her with, said as she grabbed them each by the arm. With a firm tug, she dragged them towards the large multicolored building that her father said looked like a rainbow took a shit on. She wasn't sure what shit was exactly, but she knew that no matter what shit was, her father was probably right.

"She started it!" the boy pointed out as they were dragged to the small table in the far corner with the scary clown painted on it.

"That's enough of that, Connor," Mrs. Fitzpatrick said sternly as she planted them on wobbly, red blotched stools. "You will both sit here and think about what you did while the rest of the children enjoy free play. "

Rory narrowed her eyes on the little boy that had cost her a turn on the swings as he narrowed his eyes on her.

"You'll pay for this," he promised tightly.

"No, you will," she said, knowing the second, the very second, Mrs. Fitzpatrick turned her back on them that the large jar of pink glitter by the window was going to find its way into Connor's hair.

He held it up, making little Rory James jump higher for it. She tried to glare at him, but unlike the other boys, he wasn't afraid of her or her big brothers. As far as he was concerned, little Rory James had been put on this earth solely for him to torture and torture her he did.

"Give what back?" he asked innocently, waving her notebook in the air above the brown pond water just to taunt her. Not that he was going to give it back to her, he wasn't. In a minute or two when he got bored with this, he fully planned on throwing it in the water with the hopes that she'd go after it.

"My notebook, you jerk!" she said, giving up on trying to get it back and moving to the kicking phase, but he was ready for that. After five years of making her life a living hell he knew what to expect and he knew that if he gave her a chance she'd kick him between the legs and drop him to the ground. Then she’d probably make him eat dirt, again.

"Just give her the notebook," Zack, the annoying boy from Mrs. Plumes' class who'd been following after Rory for the past two weeks like a puppy dog, said. Connor hadn't minded the kid before he started following after Rory. He was a decent basketball player and knew how to make an awesome spit ball, but he didn't like anyone getting between him and Rory.

"I can take care of myself," Rory said, never taking her eyes away from him, which pleased him immensely, but he was still pretty annoyed with the interruption.

"Why don't you come take it for her?" he suggested to the boy as he reached out and palmed Rory's face and shoved her away before she tried to kick him while he was distracted. With a curse that would probably have her father reaching for a bar of soap, she stumbled backwards and fell over a dead log and landed in the mud. Connor would have laughed, but he had other things to do at the moment.

"Fine," the only slightly smaller boy said as he stormed over and made a move to grab the notebook. With a bored sigh, Connor held the notebook higher and further away. As soon as Zack reached out for it, Connor hooked his foot between the boy's legs and pulled up just as he turned, causing the boy to lose his balance and take a header into the dirty water.

"Next time mind your own business," he said, laughing as the boy started to cry. Crying over a little dirty water, what a dork, Connor thought. Rory wouldn't have cried. She never cried, which he took as a personal challenge.

"And next time," Rory suddenly said as he felt her small hands press against his back and shove, "don't touch my math homework. " With that, he went stumbling and landed in the water right next to the big crybaby.

Connor rolled over and spit a mouthful of murky water at Rory, laughing when it hit her bare leg. Deciding that wasn't nearly good enough, he used her now soaked notebook and splashed her until she was as soaked as he was.

As they rolled around in the muddy water, trying to make the other one eat a handful of mud he couldn't help but smile. She was just so much fun to torture, he thought as he forced a handful of mud and god only knows what else in her mouth.

Rory shoved her green, black, and pink paint splattered hair out of her face and wondered, not for the first time, why the school hadn't let them either use the showers in the locker rooms or sent them home to wash up and start their two weeks of detention tomorrow. It would have made more sense and would have saved them from having to stand at the back of the room on newspapers so that they didn't get paint everywhere as well as the embarrassment of having the other kids laughing at them.

"That's what I told her, Mr. Williams," Connor said, discretely reaching out when Mr. Williams became distracted by a spitball flying past his head and shoved Rory, making her stumble off their newspaper mat and onto the pristine white tiled floor.

"You bastard!" she hissed as she jumped back onto the newspaper, but not before her paint soaked stocking feet left large smears of black and red paint all over the floor.

"Just wait until detention's over, Rory. You're going to pay for making me miss practice," he said, shoving her again, but this time she managed to stay on the newspaper.

"We wouldn't be here if you hadn't shoved me into the art room," she said, shoving him back, causing him to stumble, slip and slide on the floor, leaving an impressive streak of green and pink paint behind.

"If anyone should be mad, it's me. You made me miss work!'" she said, giving him another shove that added a little bit of black paint to the mix.