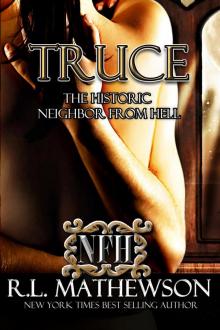 He was going to strangle the son of a bitch with his bare hands, Jason decided as he ignored the bastard hovering over him. The party was in two hours and he wasn’t close to finishing Haley’s present. Four months of working on this damn thing first thing in the morning and last thing at night and it still wasn’t done.

Thank God his father had started bugging the shit out of him six months ago to get this done. At first he’d shrugged it off, deciding that it could wait until the last minute, but then his father, uncles and a few of his cousins started to share their horror stories with him until he decided that perhaps it would be better to just get it over with.

Four stitches, one citation for trespassing, two second degree burns, ten migraines, one wrecked pair of jeans, two-thousand miles on his car, more than a dozen sleepless nights later and he was cursing his great-great-great-great-great grandfather to hell and back for starting this bullshit tradition in the first place. Would it really have killed the inconsiderate bastard to go out and buy his wife a necklace for their fifth anniversary instead of making one and dooming all his descendants to this bullshit tradition? He really didn’t think so, especially since the man had supposedly been the brother of a very wealthy earl.

“What the hell is that supposed to be?” Trevor asked, taking a big bite out of-

“Those are my brownies, you bastard!” Jason snapped, snatching the half-eaten brownie out of his cousin’s hand.

With a roll of his eyes and a small, annoyed sigh, Trevor reached over and plucked the brownie out of Jason hand and shoved it into his mouth before Jason could steal his precious brownie back. Mangled necklace momentarily forgotten, he stood up and shoved his cousin out of the way so that he could make sure that the rest of his precious babies were okay. He felt his heart break as he neared the kitchen counter and saw what was left of the platter of brownies Haley had made him for his mid-morning snack.

“How could you?” Jason asked hollowly, picking up the empty plate and praying that his cousin had missed a delicious morsel or two, but there was no hope.

The bastard had most likely licked the plate clean.

“I was bored,” Trevor said with a shrug as he sat down at the kitchen table and leaned over to get a better look at the mangled necklace that Jason was desperately trying to finish in time for the party.

“If you’re bored, then help me,” Jason said, shooting a nervous glace up at the clock and trying not to wince at the amount of time he’d lost bitching over the loss of his precious treats.

“Can’t,” Trevor said with a shrug.

“Why the hell not?” Jason demanded, sitting down next to Trevor and picking up the small white stone bead that he’d made out of one of the rocks he’d managed to steal from the pool area of Haley’s old house.

He really wished that they hadn’t sold the house to that crabby old bastard. He’d taken great joy out of refusing to give Jason a few rocks from the pool area so that he could make Haley a necklace for their fifth anniversary. Actually, he really wished that he’d brought a steak with him later that night when he’d been forced to jump the fence so that he could grab a couple of rocks. Then again, the steak probably wouldn’t have saved him from the psychotic little dog with the pink bow that had taken his job as guard dog a little too seriously.

“Because you have to make the necklace by yourself from start to finish,” Trevor pointed out, unnecessarily since all the Bradford boys knew the rules for this tradition by the time they were ten years old.

“The party is in less than two hours,” Jason pointed out, hoping that his cousin ignored tradition and helped him. He didn’t want to disappoint his wife and he sure as hell didn’t want to break a tradition that the men in his family held sacred.

“Then I suggest that you stop bitching and get threading,” Trevor said with a smug smile as he gestured for Jason to get working.

“Your fifth anniversary is coming up soon, ass**le, so I wouldn’t get so damn cocky if I were you. You’re going to need help,” Jason said pointedly as he gestured to the thin silver chain.

“In three years,” Trevor said in that same smug tone that was starting to piss him off.

“You’ll need help then,” Jason bit out tightly as he arranged the tiny plastic bags in order, or at least, what he hoped was the correct order.

“Unlike you, I didn’t wait until the last minute. As soon as I realized that Zoe couldn’t live without me, I started to work on her necklace,” Trevor explained as he leaned back, making a show of relaxing.

“Didn’t you have to beg her to marry you?” Jason pointed out, simply to piss him off.

“I just let everyone think that. ”

“Uh huh,” Jason said, switching the bag holding a small gray stone bead with the bag holding the small dark, almost black, stone bead. He’d made it from the stone he’d picked up from the bar’s parking lot where he’d carried Haley that fateful night when she’d released her adorable fists of fury for the first time.

“You’re still not done?” Jarred, his father, snorted in disgust as he walked past them on his way to the kitchen counter.

“Almost,” he said, hoping that it wasn’t a lie.

“Where the hell are my brownies?” his father demanded.

“Jason ate them,” Trevor said quickly, making sure to sound properly appalled as the rat bastard did his best to screw him over.

“You selfish bastard!” his father hissed in outrage, making him wish that he didn’t have to finish this necklace so that he could kick his cousin’s lying ass.

“Haley brought ten platters to the party,” Jason pointed out, hoping that his father and cousin would take the bait and get the hell out of here so that he could focus on the task at hand.

“Goddammit!” his father snapped, yanking a chair away from the table and sitting down in agitation. “There won’t be anything left by the time we get there,” his father bit out with a pout. With a muttered curse, Jason rolled his eyes at his father’s whining even as he frantically rearranged the order of the small bags.

“Party’s not for two hours,” Jason pointed out, not bothering to look up as he placed the handmade stone beads in what he prayed was the correct order. “If you leave now, Haley will probably let you have an entire platter to yourself to hold you over until the party starts,” he murmured absently.

“Can’t leave yet,” his father grumbled.

“Why the hell not?” Jason demanded, chancing a look up at the clock and wincing when he realized that another ten minutes had gone by.

“Tradition,” his father and cousin said in unison, making him frown in confusion.

“What the hell are you talking about?” Jason asked, shooting the clock on the microwave one last anxious glance before looking back down at the bags of rock beads.

“I’ve already heard the story,” Jason said, sighing heavily as he stared down at two gray stone beads that he couldn’t for the life of him remember which one was which.