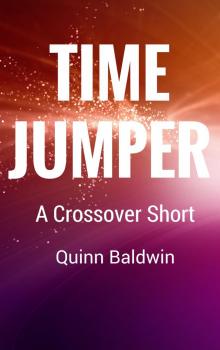 Solo Helms first heard about time travel in 3rd hour. His best friend was sitting next to him in math, the light from the teacher screen splashing over his milky-white face. He looked like he was about to cry or throw up. Or both.

Phil, dressed impeccably as always in his Polo shirt and khakis, continued to stare at his desk. Solo kicked his desk and Phil finally glanced up, startled.

“You all right?” Solo whispered even though there wasn’t a real teacher in the room.

Phil shook his head. “Something happened last night.” A handful of terrifying scenarios ran through Solo’s head: his best friend was moving, he got a girlfriend, cancer. “With my dad.”

Solo’s stomach dropped. Phil’s dad was a cop. “Is he okay?”

Phil hesitated. Solo had never seen his friend like this. He was always so self-assured, so Manifest Destiny, like affluence and success were a guarantee. Even so, why suffer through these unpleasant emotions? It was 2029, after all. Just take a Happy Pill and be done with it.

“Last night,” Phil said, “I heard my Dad talking in his office. He sounded so…angry. You know my dad. He’s never like that. So, I stopped and listened outside the door.”

A girl wearing her hair in a buzz cut as was the latest trend shushed them, but both boys ignored her.

“I could only hear some words when he’d raise his voice, but he kept using the word, crossover and the year 2023. He said if they visited any year after that it would be too late to stop it from happening.”

Solo did know Dylan Prince. A no-nonsense police officer that was so black-and-white, so literal, he was almost annoying. Like father, like son. Solo should have laughed and gone back to math. Things would have turned out a lot different if he had, but Phil was the smartest kid he knew. Just like his father, he didn’t have time for jokes or flights of fancy. If his hackles were up about something, it wasn’t all bark and no bite.

“Did he say anything else?” Solo said.

“Not much. He said something about ‘unfinished business’ and ‘stopping it before it was too late.’”

Solo shook his head. It was just too crazy. “It was probably something for work. You know catching some suspect who lives at that address. 2023 South Orchard Street or something.”

Phil ran a shaky hand through his finely-tuned hair, mussing it and giving himself an uncharacteristically disheveled and somewhat crazed look. “It got really quiet in there and that’s when I got worried. I finally knocked and he didn’t answer. So, I pushed the door open.”

“And?” Solo’s knuckles had turned white where they gripped the sides of his desk.

Solo would have laughed then if Phil didn’t look so stricken. “Was he hiding under the desk or something?”

“So, what’d you do?” They were getting looks from other students, but Solo didn’t care.

“I ran to find Mom, but just as I stepped into the kitchen, I heard a crash in his office. I sprinted back and found him slumped in his chair, blood running down the side of his face.”

“No.” Phil’s hand took another dive through his hair. “The knuckles on his right hand were scraped and bloody like he’d been in a fight even though no one was in the room. He wasn’t even in the room one minute earlier.” Phil looked up at Solo then with a stare that pleaded to be believed.

“So,” Solo said, “your dad traveled back in time and fought someone. In another time. And then came back just seconds later even though hours or days may have passed.”

“I knew you wouldn’t believe me.” Phil turned away and focused on the teacher screen.

“Phil.” Solo waited until his friend finally glanced over. The friend who shared his carbon rations when no one else would. The friend who stepped between Solo and Kyle Buff and got a concussion for his trouble. “It sounds totally crazy, but I believe you.”

There had been rumors of course, conspiracy theory stuff, the government or Big Business, or both using an experimental new device invented in China and stolen by the US that allowed the user to travel a few hours forward or backward in time. Years though? It seemed as impossible as it sounded. Solo didn’t think about it much, because what was the point? If someone changed the past, it would change the present, erasing your memory of a different course of events and…Just thinking about it made Solo’s head spin.

Yet, Phil’s dad was something different entirely. This wasn’t a news feed sound bite, it was in their backyard. And Phil had been shaken to his core. Solo couldn’t help but admit he was scared… and a little curious too.

“Can we hide in your dad’s office?” Solo said after a moment.

“What if he’s in trouble and we’re the only ones that can help?” Neither one broached the idea of simply talking to the man. In that house, Phil didn’t speak unless spoken to.

“What if we just stake out his office tonight and see what happens?” Solo could tell Phil’s resolve was weakening. Perhaps he was curious too. Or just terrified his dad would wind up with more than bloody knuckles. “I’ll come home with you after school and if we can’t find good hiding places, the deal’s off, okay?”

“There’s one more thing I didn’t tell you,” Phil said, his eyes glassy as he watched the teacher’s movements on screen. Solo felt a tickle of fear trace its way down his spine. “The knuckles on his right hand were bloody, like he’d punched someone. He had something in his left hand though.”

Phil couldn’t seem to bring himself to say it. Solo leaned closer. Perhaps it was the light from the screen, but it looked like Phil’s eyes were rimmed with tears. Phil never cried.

“What was in his left hand, Phil?”

“A gun. With smoke curling out of the barrel. Just like in some movie.” Phil finally locked eyes with Solo. “I think he killed someone. In the past.”

When they stood in Phil’s dad’s study, books on military history and firearms covering the bookshelves and not one, but two gun safes hugging the wall, Solo started wondering if this was a good idea. What would happen if they got caught? Worse, what if it was true, that time travel was real and people were changing the past to alter the present? Even if it was Phil’s dad, a guy Solo had known since he was five, the thought made his heartbeat pound in his ears like war drums.

They finally decided their best bet was to pull the leather couch out from the wall about a foot and slide in behind it. The study seemed even more ominous now as the last of the afternoon’s sunlight blazed into the room.

Hiding on the floor, their faces less than a foot apart, Solo was reminded of the building forts as kids in his living room. He tried to convince himself this was still just a game, but his mouth had that penny taste like he was seconds away from emptying his lunch on the pristine carpet.

“You know,” Solo whispered, “if it is tr
ue, no one is safe. They can change anything.”

“Maybe my dad’s just trying to clean up some mistakes to make our time better.”

“I know.” His voice sounded small. And frightened.

They barely heard the police cruiser stop outside the window, not one car door slamming, but two. Their eyes met in the fading light and Solo saw the raw terror he felt pulsing through him mirrored on his best friend’s face.

They scrambled up only to hear voices coming toward them in the hallway. They dove back out of sight behind the couch. Solo wanted to squeeze his eyes shut, but found he couldn’t instead watching the room from floor. Two people walked into the room, their feet clad in black boots. They stopped dangerously close to the couch.

Someone shut the door. And locked it.

“Why do you always crossover here at your house?” a man asked, his voice coarse like it had been dragged behind a truck over gravel and then hacked to pieces with an axe.

“Because this house was built only two years ago,” Officer Prince said. “I go back earlier than that and I know I’ll be standing in an open field, not some neighborhood or highway.”

“Makes sense,” the other man said. “So why am I here? I know you like to work alone.”

“Our guy is likely to have a few friends. I need the backup.”

“Let’s just go back farther and find him when he’s a little kid.”

“His first arrest wasn’t until the age of 19. No records before