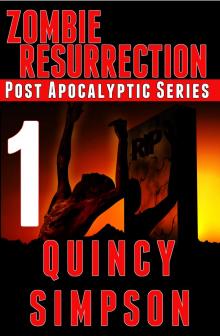 This eBook is licensed for your personal enjoyment. This eBook may not be re-sold or given away to other people. If you would like to share this book with another person, please buy an added copy for each recipient. If you’re reading this book and did not buy it, then please buy your own copy. Thank you for respecting the hard work of this author.

This is a work of fiction. Names, characters, businesses, places, events and incidents are either the products of the author’s imagination or used in a fictitious manner. Any resemblance to actual persons, living or dead, or actual events is coincidental.

It started like any other Monday morning. But this was not just any weekday. Soon College Students Carl and Betty, Pastor Jeremiah, and Computer Programmer Mary would find out how different this day was as the long anticipated Zombie Apocalypse began.

One minute Carl and Betty are studying for a class, the next they are running from bloodthirsty zombies bent on devouring them. Will they be able to survive?

Computer programmer Mary has to get out of the city when everyone else has the same idea. Will the living dead end their lives like they have ended the work day?

Reverend Jeremiah Jones began the day wanting to sleep through boring ministry presentations, but now he is attempting to evacuate hundreds from the meeting that the Bishop left him in charge of.

New Episodes will appear regularly, so please check back.

The cool wind brushed up against Betty and Carl. The scene is perfect for a college brochure designed to excite freshmen into attending their institution. Behind the collegiate pair stood the majestic and historic Lake Hall. This building provided a fitting backdrop to the scene.

Throughout most of high school, Betty and Carl had dated. Ever since Carl laid eyes on Betty, he wanted to be with her, and Betty soon relented to his advances. But Betty decided to take a break upon graduation and broke Carl’s heart. While Betty attempted to move on, Carl kept track of where Betty planned to attend college. Carl’s acceptance and choice to attend Northern Georgia University surprised Betty. She had hoped to attend a college far away from home, but ended up three hours northeast of Atlanta.

Betty wanted to move on, but Carl continued to speak of his love for her. On that day, Carl asked Betty questions to help her prepare for an important test.

“Will they open this building? I need to sit,” Carl asked while looking straight up to the sky.

Betty laughed and glanced at her cell phone to find the time. She said, “And where is everybody? Why are they so late opening the door? It’s freezing out here.”

Carl leaned in, “I can get you warm.”

Betty smiled, “Not going to happen….”

Carl slumped and asked another question, as he did when Betty rebuffed his advances.

A horn blasted on the campus. This reminds the students to get information from their cell phones for a message from the school. The school was one of the first to implement the emergency cell phone message after one of those school shootings.

Betty reached into her purse and pulled out her cell phone. Carl leaned in to get a better view.

The phone read, “Northern Georgia University has canceled classes today, and we encourage the students to keep abreast of the changing health care issue. The governor has asked us to stay on the campus to keep the roads clear for emergency responders. Classes will resume tomorrow.”

“I am glad of that. I need another day to study for this chemistry exam. Let’s head back to the dorm, I need a nap,” Carl said.

“Nobody came to class, so why didn’t someone tell us? We didn’t get that memo.” Betty laughed.

They began walking back to the lady’s dorm when Carl’s phone rang. Carl pulled the phone out of his pocket. He said, “It’s my mom. I’ll call her later.”

They continued walking. They found that while the class buildings were quiet, the residence dorms had a lot more people running around than usual. People were also running around the upperclassmen’s residence hall. Students were running to cars and driving off the campus.

“Do you think we should go ask them what’s going on?” Betty asked.

“I think we should get to our dorms. Something is happening.”

They both marched together when Carl’s phone rang again. His mother called again.

“You ought to answer.”

“No way, I’ll wait to call her back later. We need to find out what is happening on this campus. For all we know there may be a shooter.”

“Wouldn’t they tell us if there was a shooter?”

“Not if they wanted us to remain calm.”

They walked by Buster Hall. Many people were running and yelling.

“If they are trying to keep us calm, it ain’t working,” Carl said. “I think we need to walk faster.”

As they got closer to the freshmen girl’s dorm, it appeared to be move-in day. Suitcases everywhere. Cars being loaded and parents helping to load up the cars. But, unlike move-in day, everyone was running and there was a lot more yelling.

“What the hell?” Carl asked. He grabbed Betty’s arm and rushed over to the dorm, pulling her along.

They got to the front door of the dorm. Students were entering and exiting one after another. Carl grabbed one who he had talked to on occasion in his calculus class and asked, “What’s happening? Why is everyone trying to get out?”

“You have got to be kidding,” his classmate said.

“Something big is happening in the city. They are about to institute a mandatory curfew and clear the roads, and folks are trying to get out.”

“Mandatory curfew? But if you leave, what about class tomorrow?”

“Look man, I ain’t got no time to tell you. As for class, if you go tomorrow, you are going to be in there by yourself. Now my mother is ready to drive off.” Carl’s classmate ran away.

“I think we need to pack up and get out. I’ll catch you back here in an hour.”

Betty ran into the dorm.

Carl’s phone rang again. He pulled it out. It was his mother for the third time. He answered it this time.

“A virus turns people into raving lunatics. They are telling us to stay in the safe place that we stay in for storms and to stay away from people. Your brother, sister, and I are in the storm shelter. We want you here, son.”

Carl dialed the number back and got a busy signal.