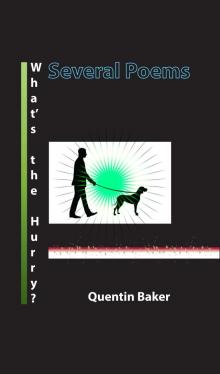 A chapbook of thirteen poems written in the 1990's. Two of these poems won second prize honors at the Alameda County Fair three years ago. It is free to download, although a payment of 13 cents to either the author or your favorite charity would be appreciated. Before the Civil War, Walt Whitman peddled his poems door to door in Brookly, N.Y. for one penny per poem.Honoring the Bard!A Murderer No need then to take a life,Silence its voice Strew its brains across the gutter Shred its fibers into pulp When bold Macbeth Has done it for me: I’ve heard his heart knocking at his ribs, Staggered with him from the king’s bedchamber Bedabbed in gore, Hunched in the dark with not two but three henchmen In Banquo’s path, And waded so far into Fife’s red pool It was easier to go o’er than turn back. We two, famous murderers, Have had our fill. November 1991