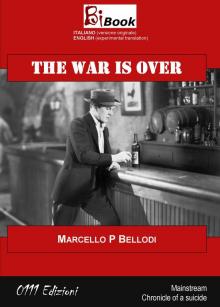 This book derives from the imagination and the mind of the author.

This novel is a lie, despite can be likely,

reality has been deformed to the aesthetical thin solos and of narration.

Any advertising you/he/she has been abused during the layout of this book.

Dear Anybody, to die is not then the worse thing that can happen to a man. It looks at me: I have been being dead for three days and I have finally found the peace. You always said that my life was suspended to a thread, beh... now also yours is suspended to a thread and they is in many to want that thread to cut him/it; but you like to risk, it is your way of feeling you alive. Do you see here, is the difference between me and you perhaps all here: me, when I understood that there was a trouble in sight, if I was able did I avoid him/it; you no, if the trouble there is not do you invent him/it to you, and then you resolve everything leaving the worth to another, so you can keep on being anybody; it is not ache thought, do you know?

But this time you have played big and they are already in too many to know that you are someone, so you will also end you to reveal you a name, and then you will see that you won't have time anymore to play, and it will be hard more and more, until even you will also find you one who wants to put you in the history and to return to be anybody, he can die only.

Beh, of now in then you will have to walk in my shoes and it will perhaps pass you of that whole desire to laugh that you have there. But a thing you are able her/it he/she anchors to do: to preserve some that illusion that made to move us others, those of the old generation, and even if you will do him/it with your usual joke tone we will be the same thankful of it; because after all, to my times we were romantic, we still believed to be able to resolve everything confrontation with a good hit of gun, then the west was immense, boundless, desert, a place where he/she didn't meet twice never him the same person.

Then? Then you have arrived, and have become small, crowded, continually meets us!

Yet, if you can go around still catching flies, you can also do him/it because first there have been those as me. Yes, those that have to end on the books of school because people also have to believe in something, as you say you. But you won't be able certain to still do him/it for a lot of time. The country is grown, you/he/she is changed, I don't recognize him/it more and I already feel it foreigner. But what is worse, is that violence is also changed; is organized! And a good hit of gun is not enough anymore.

But you already know him/it, because this is your time, not more mine. By the way I have also found the ethic of the tale that your grandfather told, yes that of the birdie that the cow had covered with merda to make him/it star warm and that you/he/she was out then taut and eaten by the coyote. It is the ethic of the new times: not all those that throw you some merda I set they do him/it to hurt you, not all those that throw you out of the merda they do him/it to do you some good. But above all, when you are in the merda up to the neck, it is' silent.

Therefore, one as me have to leave, and I have to say the truth: yours has been a good idea to the height of the new times. With your false duel, you have found the cleanest way to make to go out me of the West. After all I am tired, and the years don't make any wise, they do only of the old ones, it is true that you/he/she can be been as you, young people of years and old men of times. Am I spitting sentences eh? But is it your guilt: as you want that I/you/he/she speak a national monument?

I wish you to meet one of those that you/they never meet him, or almost never, so you can make company. For me it is difficult that the miracle repeats him, but as it is said... the distance does dearrer the friendship and the absence it does her/it more dessert. But now that I have not seen you for three days, I already start to feel your lack.

Beh, owes now you really to leave, and even if you are a big snoop rompiscatole and meddler, thanks of everything.

Ah, forgot, when you go to the barber, insureds that behind the apron there is always the correct face.