The Last Days of Lorien, p.1 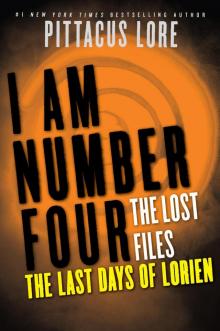 This is Lorien. It’s “perfect” here. That’s what they say, at least.

Maybe they’re right. Over the years, Lorien’s Office for Interplanetary Exploration has sent recon missions to pretty much every inhabitable planet out there, and they all sound terrible.

Take this place called Earth: it’s polluted, overcrowded, too hot and getting hotter every day. The way the scouts tell it, everyone there is miserable. The earthlings all spend a lot of time trying to kill each other over nothing; they spend the rest of their time trying not to get killed.

Scan through one of their history books—we’ve got a bunch of them available in the Great Lorien Information Depository—and you’ll see it’s all just one pointless war after another. It’s like, Earthlings, you idiots, get it together!

The thing is, other than Lorien, Earth’s about the best place there is out there. I’m not even going to bother mentioning Mogadore. Talk about a dump.

Here on Lorien there’s no war. Ever. The weather’s always perfect, and there’s enough variation in ecosystems that you can find a place with whatever your own version of perfect weather is. Most of the place is pristine forests, perfect beaches, mountains with views you wouldn’t believe. Even in the few cities we’ve got, there’s plenty of space to move around and no crime at all.

People don’t even argue all that much.

What is there to argue about? The place is perfect, so of course everyone’s happy. Like, always. You walk down the street in Capital City and you see everyone smiling like a bunch of happy zombies.

But there’s no such thing as perfect, is there? And even if there is, then I have to say: “perfect” is pretty boring.

I hate boring. I always do my best to find the imperfections. That’s where the fun usually is.

Although, come to think of it, as far as a lot of people are concerned—my parents chief among them—I’m the biggest imperfection of all.

The Chimæra was packed the night it all finally caught up with me. The music was blaring, the air was full of sweat, and—surprise!—everyone was happy and grinning as they bounced and spun and crashed into each other.

Tonight, I was happy too. I’d been dancing for hours, mostly on my own, but every now and then I’d bump into some girl and we’d end up dancing together for a few minutes, both of us smiling and laughing but not taking any of it too seriously until one of us got caught up in the music and danced away. It was no big deal.

Okay, it was turning out to be a pretty great night.

It was almost dawn before I was out of breath and ready for a break, and after hours of nonstop motion I finally let myself flop up against a bank of columns near the edge of the dance floor. When I looked up, I saw myself standing next to Paxton and Teev. I didn’t know them very well, but they were regulars at the Chimæra, and I’d come here enough that we’d been introduced a few times.

“Hey,” I said, nodding, not sure if they’d remember me.

“Sandor, my man,” Paxton said, thumping me on the shoulder. “Isn’t it past your bedtime?”

I should have been annoyed that he was making fun of me, but instead I just felt happy to be recognized. Paxton always thought it was funny that I always found my way into the place even though I was still technically too young.

I didn’t see what the big deal about being underage was—the Chimæra was just a place to dance and listen to music. But on Lorien, rules are rules.

Paxton was only a few years older than me and was a student at Lorien University. His girlfriend, Teev, worked at a fashion boutique in East Crescent. From what I could tell, they both had the kind of lives I wouldn’t mind having someday. Hanging out at cafes during the day, dancing at places like the Chimæra all night, and no one giving either of them a hard time about any of it.

I didn’t have that long to wait anymore. But it felt like I’d already been waiting forever. I was tired of being a teenager, tired of going to school and obeying my teachers and playing by my parents’ rules. Soon I wouldn’t have to pretend to be an adult. I would just be one, and I’d be able to live my life the way I wanted.

For now, the Chimæra was the one place I could actually be myself. Everyone here was a little like me, actually. They wore crazy clothes, had weird hair; they did their own thing. Even on a planet like Lorien, there are people who don’t quite fit in. Those people came here.

Sometimes—not often, but sometimes—you’d even catch someone cracking a frown. Not because they were unhappy or anything. Just for fun. Just to see how it felt, I guess.

Teev was looking at me with an amused expression, and Paxton pointed at the identity band on my wrist. “Aren’t those things supposed to be foolproof?” he asked with a smirk. “Every time I see you, you’ve figured out another way in that front door. ”

The gates at the Chimæra scan all patrons upon entry, mostly to prevent underage Loriens like me from getting in. In the past, I’d sometimes snuck in a back entrance or shoved through the doors unnoticed with a big crowd. Tonight, though, I’d gone a step further, modifying my ID band’s age signature so the machines would think I’m older than I am. I was actually pretty proud of myself, but I wasn’t about to give up all my secrets. I just gave Paxton a sly shrug.

“That’s me. Sandor, Technological Wizard and Man of Mystery. ”

“Forget about the door scan, Paxton,” Teev said. “What about the Truancy Register at his school? You do still go to school, right? You better hurry or you’re going to get busted. It’s getting late. ”

“You mean early,” I corrected her. The sun would be coming up any minute. But she was right. Or, she would have been.

Teev had a mole above her lip and a scarlet-colored birthmark high on her cheek, fading back into her hairline. A thin-line tattoo encircled the mole and then curved up into an arrow, pointing at the birthmark. She was shortish and kind of cute and there was something offbeat about her. She was who she was, and she wasn’t going to hide it. I admired that about her.

I was tempted to tell her how I’d gotten around the problem of the Truancy Register. It had actually been an easier fix than the door-scan problem—or maybe I was just that good. All I did was borrow my friend Rax’s ID band and embed a copy of my own digital biosignature inside it. Now whenever I cut class, the class register scans me as “present” as long as Rax is there.

I’d figured the trick out after I’d gotten in trouble a few months ago and had been forced to do some time working in the school’s front office. There, I’d discovered the flaw in the Truancy Register’s system: it doesn’t catch redundancies. So when Rax and I both do show up, there are no red flags. It’s perfect.

“Can’t reveal my secrets,” I say, giving a little smirk.

“Thanks,” I said, trying to act like I didn’t actually care. But before I could think of anything else to say, I froze. Over by the club’s entrance, I spotted someone I knew. And not someone I wanted to know.

It was Endym, my interplanetary cultures professor at Lorien Academy.

Okay, Endym was generally a pretty cool guy, probably the only teacher I had that I actually liked. But cool or not, if he saw me out at the club, underage and with no hope of making it to school in time, he’d have no choice but to report me.

I grinned at the couple I was talking to. “Teev, Paxton, it’s been a pleasure,” I said, easing myself out of Endym’s line of sight and into a mass of dancing people with a half wave. Under the cover of the crowd, I peered back towards the entrance and sa
w Endym as he was approached by one of the club’s vendors. He took one of the proffered ampules and popped it into his mouth, his eyes scanning the club, and then he stepped forward, onto the dance floor. I was pretty sure he hadn’t seen me—yet—but he was heading right in my direction.

Shit. I ducked behind a column to escape his sight.

The Chimæra’s a big place, but not big enough. If I stayed where I was, I was going to spend all my time trying to avoid him—and even then, I didn’t like my odds that he wouldn’t spot me.

I had to get out, and I had to take my opportunity now, while Endym was distracted. He’d just struck up a conversation with a woman in the middle of the dance floor and was flirting with her shamelessly as she danced. I rolled my eyes. The fact that my teacher was at the Chimæra was suddenly making it seem significantly less cool.

The only way out was to go deeper in. I’d never been in the dressing room below the stage, but the performers had to come from somewhere. The only problem was that Endym had somehow positioned himself in the worst possible spot for my purposes: I’d have to go past him to make it to the entrance, but he had a direct line of sight to the back stairwell, too.

I cast around the place, trying not to attract attention by seeming frantic, hoping I’d find a solution to my dilemma. Then I realized it as I spotted them, still standing a few paces away: Teev and Paxton. They would help me. At least, I hoped they would.

“What would you say,” I said, sidling back over to them with my conspiratorial smile plastered across my face, “if I told you the guy over there is a teacher of mine?”

The couple glanced over at Endym, then back at me.

“Bad luck, dude. ” Paxton laughed. “All that trouble to get in here and now you’re going to get busted. ”

“Come on man. Don’t laugh. How about helping me out?” When they just looked at each other skeptically, I gave a sheepish shrug. “Please?”

Teev tossed her hair and rolled her eyes amiably. “Okay. You got it, little dude,” she said, patting my face. It was kind of humiliating, but what could I do? “We’ll take care of you,” she promised. “Get your ass out of here. ”

When I was sure they’d reeled Endym in, I took my chance. I slid through the crowd, keeping my head low to avoid being seen.

I was almost home free when someone shouted at me. “Hey!” I looked back, startled, to see an angry face and a guy shoving toward me. I had accidentally knocked the guy’s ampule to the floor as I’d pushed past him, and he wasn’t happy.

The last thing I needed was to be caught in a fight on the dance floor. I picked up speed and ran for the edge of the stage, where I groped the dark corner and found a small door.

Of course it was locked.

“Hey! You!” shouted the guy whose drink I’d spilled. He was getting closer. “You’re gonna replace that!”

I jiggled the handle furiously. When it didn’t budge, I gave up on trying to be cool and began throwing myself against the door, hoping that with enough force—and a little luck—it might give.