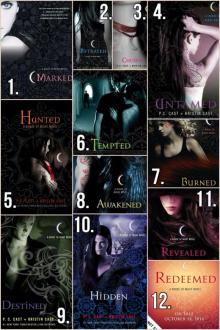 The night sky over Tulsa was alight with a magical crescent moon. Its brilliance made the ice that coated the city, and the Benedictine Abbey where we'd just had our showdown with a fallen immortal and a rogue High Priestess, shimmer so that everything around me seemed touched by our Goddess. I looked at the moonlight-bathed circle that stood in front of Mary's Grotto, the place of power where not long ago Spirit, Blood, Earth, Humanity, and Night had been personified and then had joined to triumph over hatred and darkness.

The carved image of Mary, surrounded by stone roses and nestled within a ledge high in the grotto, appeared to be a beacon for the silver light. I stared at the statue. Mary's expression was serene; her ice-covered cheeks glistened as if she wept in quiet joy. My gaze lifted to the sky. Thank you. I sent a silent prayer up to the beautiful crescent that symbolized my Goddess, Nyx. We're alive. Kalona and Neferet are gone. Thank you, I whispered to the moon. Listen within . . . The words swept through me, subtle and sweet like leaves touched by a summer breeze, brushing my consciousness so lightly that my waking mind barely registered them, yet Nyx's whispered command imprinted itself into my soul.

I was vaguely aware that there were a lot of people (well, nuns, fledglings, and a few vampyres) around me. I could hear the mixture of shouting, talking, crying, and even laughing that filled the night, but it all felt distant. At that moment the only things that were real to me were the moon above and the scar that sliced from one shoulder all the way across my chest to the other shoulder. It tingled in response to my silent prayer, but it wasn't a tingle of pain. Not really. It was a familiar warm, prickling sensation that assured me Nyx had, once again, Marked me as hers. I knew if I peeked under the neck of my shirt I would find a new tattoo decorating that long, angry-looking scar with an exotic filigree of sapphire--a sign that proved I was following my Goddess's path.

Erik and Heath, find Stevie Rae, Johnny B, and Dallas--then check the perimeter of the abbey to be certain all the Raven Mockers fled with Kalona and Neferet! Darius shouted the command, snapping me out of my warm, fuzzy prayer mode, and once I'd been shocked out, it was like an iPod had been cranked too high as sound and confusion flooded my senses. But Heath's a human. A Raven Mocker could kill him in a second. The words burst from my mouth before I could clamp it shut, proving beyond all doubt that being moonstruck wasn't my only moronic skill. Predictably, Heath puffed up like a cat-smacked toad. Zo, I'm not a damn pussy! Erik, looking very tall and full-grown, kick-your-butt vampyre-like, snorted sarcastically and then said, No, you're a damn human.

Wait, that does make you a pussy! So, we defeat the big baddies and inside five minutes Erik and Heath are banging their chests at each other. How totally predictable, Aphrodite said with her patented sarcastic sneer as she joined Darius, but her expression completely changed when she turned her attention to the Son of Erebus Warrior. Hey there, Hotness. You doing okay? You need not worry about me, Darius said. His eyes met hers, and they practically telegraphed the chemistry between them, but instead of going to her like he usually would and doing some very gross kissing, he remained focused on Stark.

Aphrodite's gaze went from Darius to Stark. Okay, eew. Your chest is totally crispy crittered. James Stark was standing between Darius and Erik. Okay, well, standing wasn't exactly what he was doing. Stark was swaying and looking extremely unsteady. Ignoring Aphrodite, Erik spoke up. Darius, you should probably get Stark inside. I'll coordinate the reconnoitering with Stevie Rae and make sure everything runs smoothly out here. His words seemed okay, but his tone was all I'm-the-big-guy-in-charge, and when he followed up with a condescending I'll even let Heath help out, he really sounded like a pompous butt. You'll let me help out? Heath snapped. Your mom will let me help out. Hey, which one of them is supposed to be your boyfriend? Stark asked me. Even in the terrible shape he was in, he caught my glance with his. His voice was scratchy, and he sounded scarily weak, but his eyes sparkled with humor. I am! Heath and Erik said together.

Oh, for crap's sake, Zoey, they're both idiots! Aphrodite said. Stark started to chuckle, which turned to a cough, which changed again to a painful gasp. His eyes rolled back and, like a slinky, he collapsed. Moving with the quickness that came naturally to a Son of Erebus Warrior, Darius caught Stark before he hit the ground. I need to get him inside, Darius said. I felt like my head was going to explode. Sagging in Darius's arms, Stark looked well on his way to being dead. I-I don't even know where the infirmary is, I stuttered. Not a problem. I'll get a penguin to show us, Aphrodite said. Hey, you, nun! she yelled at one of the nearby black-and-white?clad sisters who had scurried out of the abbey after the night had gone from battle chaos to aftermath chaos.

Darius hurried after the nun, with Aphrodite following him. The warrior glanced over his shoulder at me. Aren't you coming with us, Zoey? As soon as I can. Before I could deal with Erik and Heath, from behind me a familiar twang saved the day. Go on with Darius and Aphrodite, Z. I'll take care of Dumb and Dumber and be sure there's no booger monsters left out here.

Stevie Rae, you are the Best Friend of All Best Friends. I turned and hugged her quickly, loving how reassuringly solid and normal she felt. Actually, she seemed so normal that I got a weird twinge when she stepped back and grinned at me and I saw, as if for the first time, the scarlet tattoos that spread out from the filled-in crescent in the middle of her forehead and down either side of her face. A sliver of unease threaded through me. Misunderstanding my hesitation, she said, Don't worry about these two dorks. I'm gettin' used to jerking them apart. When I just stood there staring at her, the bright smile she'd been wearing dimmed. Hey, you know your grandma's okay, right? Kramisha got her back inside right after Kalona was banished and Sister Mary Angela just told me she was goin' inside to check on her. Yeah, I remember Kramisha helping her into the wheelchair.

I'm just . . . My voice trailed off. I was just what? How could I put into words that I was haunted by a feeling that everything wasn't right with my best friend and the group of kids she'd allied herself with, and how do I say that to my best friend? You're just tired and worried 'bout a bunch of stuff, Stevie Rae said softly. Was that understanding I saw flicker through her eyes? Or was it something else, something darker? I get it, Z, and I'll take care of things out here. You just be sure Stark's okay. She hugged me again, and then gave me a little push in the direction of the abbey. 'Kay. Thanks, I said lamely, starting toward the abbey and totally ignoring the two dorks who were standing there staring at me. Stevie Rae called after me, Hey, remind Darius or someone to keep an eye on the time. It's only about an hour until sunrise, and you know me and all the red fledglings gotta be inside out of the sun by then. Yeah, no problem. I'll remember, I said. The problem was it was getting harder and harder for me to forget Stevie Rae wasn't what she used to be.