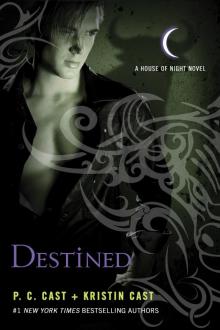 I think my mom is dead.

I tested the words silently. They felt wrong, unnatural, as if I was trying to comprehend the world turning upside down or the sun rising in the west.

I drew a deep, sobbing breath and rolled onto my side, reaching for another tissue in the box that was on the floor next to the bed.

Slowly and carefully, I got out of bed, grabbed Stark's giant sweatshirt from where he'd tossed it, pulled it on, and curled up on the beanbag chair that sat near the wall of our little tunnel room.

The beanbag made that smushy noise that always reminds me of the balls in those inflatable kid party houses, and Stark frowned and mumbled something again. I blew my nose. Quietly. Stop crying stop crying stop crying! It won't help. It won't bring Mom back. I blinked a bunch of times, and wiped my nose again. Maybe it had just been a dream. But even as I thought the words my heart knew the truth. Nyx had pulled me from my dreams to show me a vision of Mom entering the Otherworld. That meant Mom had died. Mom told Nyx that she was sorry for letting me down, I reminded myself as tears leaked down my cheeks again.

"She'd said she loved me," I whispered.

I had hardly made any noise, but Stark tossed and turned restlessly, and muttered, "Stop!" I clamped my lips together, even though I knew my whisper wasn't what was messing with his sleep. Stark was my Warrior, my Guardian, and my boyfriend. No, boyfriend is too simple a word. There's a bond between Stark and me that goes deeper than dating and sex and all the stuff that comes and goes with normal relationships. That's why he was so restless. He could feel my sadness-even in his dreams he knew I was crying and hurt and scared and-

Stark pushed the blanket off his chest and I could see that his hand was clenched into a fist. My gaze went to his face. He was still asleep, but his forehead was furrowed and he was frowning.

I closed my eyes and drew a deep, centering breath. "Spirit," I whispered. "Please come to me. " Instantly I felt the element brush against my skin.

"Help me. No, actually, help Stark by shielding my sadness from him. " And maybe, I added silently, you could help shield some of my sadness from me, too. Even if it's just for a little while. I drew another deep breath as spirit moved within and around me, swirling over to the bed. Opening my eyes I could actually see a ripple in the air surrounding Stark. His skin appeared to glow as the element settled against him like a diaphanous blanket. I felt warm and glanced down at my arms and saw that the same soft glow was resting against my skin. Stark exhaled a long sigh with me as spirit worked a little soothing magick, and for the first time in hours I felt a little, tiny bit of my sadness lift.

"Thank you, spirit," I whispered and crossed my arms, hugging myself tight. Wrapped in the comforting touch of the element I felt closest to, I was actually a little sleepy. It was then that a different kind of warmth penetrated my consciousness. Slowly, not wanting to disturb the comforting spell the element was working, I unwrapped my arms from around myself and touched my chest.

Why is my seer stone warm? The small, round stone was dangling from its silver chain, resting between my breasts. I hadn't taken it off since Sgiach had gifted it to me before I'd left the beautiful, magickal Isle of Skye.

Wonderingly, I pulled the stone out from under the sweatshirt, running my fingers over its smooth, marble surface. It still reminded me of a coconut-flavored Life Saver, but the Skye marble glittered with an unearthly light, as if the element I had invoked had made it alive-as if the warmth I felt was because it pulsed with life.

Queen Sgiach's voice echoed through my memory: "A seer stone is in tune with only the most ancient of magicks: the kind I protect on my isle.

I am gifting you with it so that you might, indeed, recognize the Old Ones if any still exist in the outside world. . . " As her words replayed in my mind the stone turned slowly, almost lazily. The hole in its center was like a mini-telescope. As it shifted around I could see Stark ill uminated through it, and my world shifted, too, narrowed, then everything changed.

Maybe it was because spirit was so close to me at that moment, but what I saw didn't feel anything like the mind-blowing first time I'd looked through the stone on Skye and had ended up passing out.

But that didn't mean it was any less unsettling.

Stark was there, lying on his back, most of his chest bare. The glow of spirit was gone. In its place I saw another image. It was indistinct, though, and I couldn't make out his features. It was like someone's shadow. Stark's arm twitched and his hand opened. The shadow's hand opened. As I watched the Guardian sword-the massive long sword that had come to Stark in the Otherworld-took form in Stark's hand. I gasped in surprise and the phantom-like Warrior turned his head in my direction and closed his hand around the sword.

Instantly the Guardian sword shifted, changed, and became a long black spear-dangerous, lethal, tipped in blood that looked way too familiar to me. Fear spiked through me.

"No!" I cried. "Spirit, strengthen Stark! Make that thing go away!" With a noise like the beating wings of a giant bird, the apparition disappeared, the seer stone went cold, and Stark sat straight up, frowning at me.

"What are you doing over there?" He rubbed his eyes. "Why are you making so much noise?" I opened my mouth to try to explain the bizarre thing I'd just seen when he sighed heavily and lay back down, flipping open the covers and motioning sleepily for me. "Come here. I can't sleep unless you're cuddled up with me. And I really need to get some sleep. "

"Okay, yeah, me, too," I said, and on shaky legs I hurried to him and curled against his side, my head resting on his shoulder. "Hey, uh, something weird just happened," I began, but when I tilted my head so that I could see into his eyes, Stark's lips met mine. The surprise didn't last long, and I slid into the kiss. It felt good-so good to be close to him. His arms went around me. I pressed myself against him while his lips followed the curve of my neck. "I thought you said you needed some sleep. " My voice sounded breathless.

We lost ourselves in each other then. Stark's touch chased away death and despair and fear. Together we reminded each other of life and love and happiness. Afterward we finally slept and the seer stone lay cold and forgotten on my breast between us.