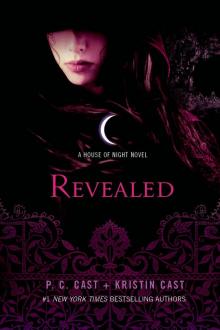 “Wow, Z, this is a seriously awesome turnout. There are more humans here than fleas on an old dog!” Stevie Rae shielded her eyes with her hand as she looked around at the newly lit-up campus. Dallas was a total jerk, but we all admitted that the twinkling lights he’d wrapped around the trunks and limbs of the old oaks gave the entire campus a magickal, fairy-like glow.

“That is one of your more disgusting bumpkin analogies,” Aphrodite said. “Though it’s accurate. Especially since there are a bunch of city politicians here. Total parasites. ”

“Does that mean your daddy, the mayor, is here?” Stevie Rae’s already gawking eyes got even wider.

“I suppose it does. I caught a glimpse of Cruella De Vil, a. k. a. She Who Bore Me, not long ago. ” Aphrodite paused and her brows went up. “We should probably keep an eye on the Street Cats kittens. I saw some cute little black and white ones with especially fluffy fur. ”

“Stevie Rae—she’s kidding. Tell her the truth,” I nudged Aphrodite.

“See, everything is fine. Plus, Damien’s at the Street Cats booth, and you know he’d never let one little kitten whisker be hurt—let alone a whole coat,” I assured my BFF, refusing to let Aphrodite mess up our good mood. “Actually, everything is more than fine. Check out what we managed to pull off in a little over a week. ” I sighed in relief at the success of our event and let my gaze wander around the packed school grounds. Stevie Rae, Shaylin, Shaunee, Aphrodite, and I were manning the bake sale booth (while Stevie Rae’s mom and a bunch of her PTA friends moved through the crowd with samples of the chocolate chip cookies we were selling, like, zillions of). From our position near Nyx’s statue, we had a great view of the whole campus. I could see a long line at Grandma’s lavender booth. That made me smile. Not far from Grandma, Thanatos had set up a job application area, and there were a bunch of humans filling out paperwork there.

In the center of the grounds there were two huge silver and white tents draped with more of Dallas’s twinkling lights. In one tent Stark and Darius and the Sons of Erebus Warriors were demonstrating weaponry. I watched as Stark was showing a young boy how to hold a bow. Stark’s gaze lifted from the kid and met mine. We shared a quick, intimate smile before he went back to helping the boy.

Missing from the Warrior tent were Kalona and Aurox. For obvious reasons, Thanatos had decided the Tulsa community wasn’t ready to meet either of them.

I agreed with her.

I wasn’t ready for…

I mentally shook myself. No, I wasn’t going to think about the Aurox/Heath situation now.

Instead I turned my attention to the second of the big tents. Lenobia was there, keeping a sharp eye on the people who clustered like buzzing bees around Mujaji and the big Percheron mare, Bonnie. Travis was with her. Travis was always with her, which made my heart feel good. It was awesome to see Lenobia in love. The Horse Mistress was like a bright, shining beacon of joy, and with all the Darkness I’d seen lately, that was rain in my desert.

“Oh, for shit’s sake, where did I put my wine? Has anyone seen my Queenies cup? As the bumpkin reminded me, my parents are here somewhere, and I’m going to need fortification by the time they circle around and find me. ” Aphrodite was muttering and pawing through the boxes of unsold cookies, searching for the big purple plastic cup I’d seen her drinking from earlier.

“You have wine in that Queenies to go cup?” Stevie Rae was shaking her head at Aphrodite.

“And you’ve been drinkin’ it through a straw?” Shaunee joined Stevie Rae in a head shake. “Isn’t that nasty?”

“Desperate times call for desperate measures,” Aphrodite quipped. “There are too many nuns lurking around to drink openly without hearing a boring lecture. ” Aphrodite cut her eyes to the right of us where Street Cats had set up a half-moon display of cages filled with adoptable cats and bins of catnip-filled toys for sale. The Street Cats had their own miniature version of the silver and white tents, and I could see Damien sitting inside busily handling the cash register, but except for him, running every aspect of the feline area were the habit-wearing Benedictine nuns who had made Street Cats their own.

One of the nuns looked my way and I waved and grinned at the Abbess. Sister Mary Angela waved back before returning to the conversation she was having with a family who were obviously falling in love with a cute white cat that looked like a giant cottonball.

“Aphrodite, the nuns are cool,” I reminded her.

“And they look too busy to pay any attention to you,” Stevie Rae said.

“Imagine that—you may not be the center of everyone’s attention,” Shaylin said with mock surprise.

Stevie Rae covered her giggle with a cough. Before Aphrodite could say something hateful, Grandma limped up to us. Other than the limp and being pale, Grandma looked healthy and happy. It had only been a little over a week since Neferet had kidnapped and tried to kill her, but she’d recovered with amazing quickness. Thanatos had told us that was because she was in unusually good shape for a woman of her age.

I knew it was because of something else—something we both shared—a special bond with a goddess who believed in giving her children free choice, along with gifting them with special abilities. Grandma was beloved of the Great Mother, and drew her strength directly from our magickal Oklahoma earth.

“U-we-tsi-a-ge-ya, it seems I need help at the lavender booth. I simply cannot believe how busy we are. ” Grandma had barely spoken when a nun hurried up. “Zoey, Sister Mary Angela could use your help filling out cat adoption forms. ”

“I’ll help you, Grandma Redbird,” Shaylin said. “I love the smell of lavender. ”

“Oh, honey, that would be so sweet of you. First, could you run to my car and get into the trunk. There is another box of lavender soaps and sachets tucked back there. Looks like I’m going to sell out completely,” Grandma said happily.

“Sure thing. ” Shaylin caught the keys Grandma tossed to her and hurried toward the main exit of the school grounds which led to the parking lot, as well as the tree-lined road that joined Utica Street.

“And I’ll call my momma. She said just let her know if we get too busy over here. She and the PTA moms will be back here in a sec,” said Stevie Rae.

“Grandma, do you mind if I give Street Cats a hand? I’ve been dying to check out their new litter of kittens. ”

“Go on, u-we-tsi-a-ge-ya. I think Sister Mary Angela has been missing your company. ”

“Thanks, Grandma. ” I smiled at her. Then I turned to Stevie Rae. “Okay, if your mom’s group is coming back, I’m gonna go help the nuns. ”

“Yeah, no problem. ” Stevie Rae, shielding her eyes and peering through the crowd, added, “I see her now, and she’s got Mrs. Rowland and Mrs. Wilson with her. ”

“Don’t worry. We can handle this,” Shaunee said.

“’Kay,” I said, grinning at both of them. “I’ll be back as soon as I can. ” I left the cookie booth and noticed Aphrodite, clutching her big purple Queenies cup, was right on my heels. “I thought you didn’t want a lecture from the nuns. ”

“Better than a lecture from PTA moms. ” She shuddered. “Plus, I like cats more than people. ”

I shrugged. “Okay, whatever. ”<
br />
We’d only gotten partway to the Street Cats tent when Aphrodite slowed way down. “Seriously. Effing. Pathetic. ” She was muttering around her straw, narrowing her eyes, and glaring. I followed her gaze and joined her frown.

“Yeah, no matter how many times I see them together, I still don’t get it. ” Aphrodite and I had stopped to watch Shaunee’s ex-Twin BFF, Erin, hang all over Dallas. “I really thought she was better than that. ”

“Eeew,” I said, looking away from their way too public display of locked lips.

“I’m telling you, there’s not enough booze in Tulsa to make watching those two suck face okay. ” She made a gagging sound, which changed to a snort and a laugh. “Check out the wimple, twelve o’clock. ”

Sure enough, there was a nun I vaguely recognized as Sister Emily (one of the more uptight of the nuns) descending on the too-busy-with-their-tongues-to-notice couple. “She looks serious,” I said.

“You know, a nun may very well be the direct opposite of an aphrodisiac. This should be entertaining. Let’s watch. ”

“Zoey! Over here!” I looked from the train wreck about to happen to see Sister Mary Angela waving me over to her.