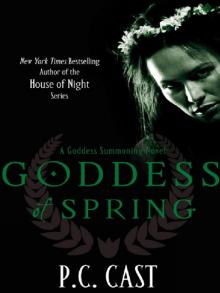 " Even amidst the lovely Dryads your daughter shines, my Lady," Eirene said. She wasn't looking at me as she spoke. Instead she was smiling at Persephone in a proud, motherly fashion, and she did not notice that my lips tightened into a thin line at her words.

"She is Spring personified and even the beauty of the nymphs cannot begin to compete with her splendor. "

At the sound of my words, Eirene's sharp gaze immediately shifted to my face. My faithful nursemaid had known me too long not to recognize my tone.

"The child troubles you, Demeter?" she asked gently.

"How could she not!" I snapped.

Only Eirene's silence betrayed her hurt. I shifted my golden scepter from my right hand to my left, and leaned forward so that I could touch her arm in a wordless apology. As usual, she stood near my throne, always ready to serve me. But she was, of course, much more to me than a simple nursemaid or servant. She was my confidant and one of my most loyal advisors. As such she deserved to be treated with respect, and my harsh tone toward her was a sign of how distracted I had become.

Her distinctive gray eyes softened with understanding at my touch.

"For us both. " I did not smile; it was not my way. But she understood me and my moods so completely that often only a look or a word was needed between us.

I studied my daughter as Eirene cal ed for wine. The little Nysaian meadow had been the perfect choice in which to spend the unseasonably warm afternoon. Persephone and her wood nymph companions complemented the beauty that surrounded us. Though the day was pleasant, the trees that ringed the meadow were already beginning to shed their summer clothes. I watched Persephone twirl gracefully under one ancient oak, making a game of trying to catch the bril iantly colored fal ing leaves. The nymphs aided the young goddess by dancing on the limbs to assure a steady waterfal of orange and scarlet and rust.

As usual, Eirene was correct. The woodland Dryads were ethereal and delicate. Each of them was a breathing masterpiece. It was easy to understand why mortals found them irresistible. But when compared to Persephone, their beauty turned mundane. In her presence they became common house slaves.

My daughter's hair shone with a rich mahogany luster, the color of which never ceased to amaze me because I am so fair. It does not curl, either, as do my grain-colored tresses. Instead her hair was a ripple of thick, bril iant waves that lapped around the soft curve of her waist. Obviously feeling my scrutiny, she waved joyously at me before capturing another watercolored leaf. Her face tilted in my direction. It was a perfect heart. Enormous violet-colored eyes were framed by arched brows and thick, ebony lashes. Her lips were lush and inviting. Her body was lithe. I felt my own lips turn down.

"Your wine, my Lady. " Eirene offered me a golden goblet fil ed with chil ed wine the color of sunlight.

I sipped thoughtfully, speaking my thoughts aloud, secure in the knowledge that they were safe with Eirene. "Of course Persephone is supple and lovely. Why would she not be? She spends al her time frolicking with nymphs and picking flowers. "

I made a very ungoddess-like noise through my nose. "I am quite aware that she produces culinary masterpieces, and then lol s about feasting to al hours with" - I wafted my hand in the direction of the Dryads - "semi-deities. "

"She is much beloved. " Eirene reminded me patiently.

"She is frivolous. " I countered.

Suddenly, I closed my eyes and cringed as another voice rose from the multitudes and rang with the insistence of a clarion bel throughout my mind. Lover, somber Goddess of the Fields and Fruits and Flowers, strong and just, please aid our mother's spirit as she roams restless through the Darkened Realm without the comfort of a Goddess. . .

"Demeter, are you wel ?" Eirene's concern broke through the supplication, effectively causing the voice to dissipate like windblown dust.

Opening my eyes I met her gaze. "It has become never-ending. " Even as I spoke more voices crowded my mind. O Demeter, we do cal upon thee, that our sister who has passed Beyond be accorded the comfort of a Goddess. . . and. . . O gracious Goddess who gives life through the harvest, I do ask your indulgence for my beloved wife who has passed through the Gates of the Underworld and dwel s evermore beyond the comfort of a Goddess. . .

With a mighty effort I blocked the teeming throng from my mind.

"Something must be done about Hades. " My voice was stone. "I understand the mortals. Their entreaties are valid. It is fact that there is no Goddess of the Underworld. " I leapt up and began to pace back and forth in frustration. "But what am I to do? The Goddess of the Riches of the Field cannot abandon her realm and descend into the Land of the Dead. "

"But the dead do require the touch of a Goddess," Eirene agreed firmly.

"They need more than just the touch of a Goddess. They need light and care and. . . " My words faded away as Persephone's bright laughter fil ed the meadow. "They need the breath of Spring. " Eirene's eyes widened. "You cannot mean your daughter!"

"And why can I not! Light and life fol ow the child. She is exactly what is needed within that shadowy realm. "

I felt my gaze soften as I watched Persephone leap over a narrow stream, al owing her hand to trail over the dried remains of the season's last wildflowers. Instantly the stalks fil ed and straightened and burst into bril iant bloom. Despite her faults, she was so precious, so fil ed with the joy of life. There was no doubt that I loved her dearly. I often wondered if my fierce devotion had kept her from growing into Goddess of her own realm. I straightened my shoulders. It was past time that I taught my daughter how to fly.

I set my already firm jaw. "Persephone wil obey my command. " Eirene opened her mouth as if she wished to speak, then seemed to change her mind and instead drank deeply of her wine.

I sighed. "You know you may speak your mind to me. "

"I was just thinking that it would not be a matter of Persephone obeying your command, but rather. . . " She hesitated.

Eirene looked decidedly uncomfortable. "Demeter, you know that I love Persephone as if she were my own child. " nodded impatiently. "Yes, yes. Of course. "

"She is delightful and full of life, but she has little depth. I do not think she has enough maturity to be Goddess of the Underworld. "

A hot retort came to my mind, but wisdom held my tongue. Eirene was correct. Persephone was a lovely young goddess, but her life had been too easy, too fil ed with cosseted pleasures. And I was at fault. My frivolous daughter was proof that even a goddess could make mistakes as a parent.

"I agree, my old friend. Before Persephone can become Goddess of the Underworld, she must mature. "

"Perhaps she should spend some time with Athena," Eirene said.

"No, that would only teach her to pry into the affairs of others. "

I scowled. "I think not. I would someday like to be blessed with grandchildren. " I narrowed my eyes. "No, my daughter must grow up and see that life is not always fil ed with Olympian pleasures and luxury. She needs to learn responsibility, but as long as she can draw upon the power of a goddess, as long as she can be recognized as my daughter, she wil never learn - " Suddenly I knew what I must do.

Eirene drew back, her face taking on a horrified expression as she began to underst
and.

"You wil not send her there!"

"Oh, yes. There is exactly where I shal send her. "

"But they wil not know her; they do not even know you. " Eirene's deeply lined brow furrowed in agitation.

I felt my lips turning up in one of my rare smiles. "Exactly, my friend. Exactly. "