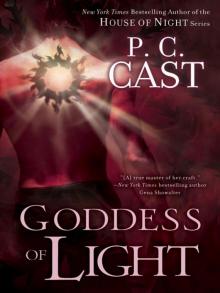 "I have made my decision, Bacchus. The portal will remain open. "

As Zeus spoke, he turned his back on the corpulent god and rested his hands against the smooth top of the marble railing that framed the balcony. He gazed down at the Great Banquet Hall of Olympus. The magnificent room was teeming with young gods and goddesses. Zeus' smile became self-satisfied. The immortals were matchless in their beauty, and when they gathered as they did on this evening, their combined allure was more resplendent than all the stars in the heavens. Then his expression sobered. No matter how perfect their exterior, he had slowly been forced to admit to himself that there was something lacking in the group below him.

They lacked the sublimely mortal touch of humanity.

The Supreme Ruler of the Gods indulged himself briefly in a particularly enticing remembrance. Aegina. . . she had been the most lovely of maidens. Her skin had been seductive mortal cream. He could still feel the imprint of its unique softness as she had pressed herself willingly against his feathered back when he changed himself into a mighty eagle and carried her away to make love to her. No, her body had not had the sheen of perfection that gilded a goddess's complexion, but she had responded to his touch with a naive exuberance that no goddess could ever match.

"Exuberance!" Zeus thumped his palm against the balcony railing, causing thunder to grumble across the sky in response. "That is what our young immortals are missing. " He didn't turn to look at Bacchus; instead, his gaze roamed restlessly across the sparkling crowd. Considering, he squinted his dark eyes. What was it that Hera had said. . . They take for granted the gifts of their immortal power. They need to spend time away from the Ancient World. Somewhere they are not idolized and worshiped. He had to admit that Hera tended to be right, even though he often had reason to wish his wife's powers of observation were less accurate. He grimaced, wanting to forget the knowing look of her sharp gaze, which always seemed to see into his soul.

"They have languished too long in Olympus. It is past time that they mingle with modern mortals," Zeus said suddenly.

Bacchus tried to keep the irritation from his voice. "But I am the only one of the immortals to ever show an interest in the modern world. Why must you insist that they clutter up my realm?"

Zeus looked over his shoulder at Bacchus. "Demeter and Persephone have recently visited the modern world of mortals, and, as the Goddess of the Harvest told me, Persephone became so attached to a kingdom known as Tulsa that she has made a bargain with a mortal woman so that she may return on a regular basis. "

Bacchus drew a deep breath and tried not to squirm under the Thunder God's gaze. "Then why not open the portal in the Kingdom of Tulsa?"

Zeus shook his head, turning back to his contemplation of the crowded hall. His talk with Demeter had convinced him that Tulsa was not a place where young gods and goddesses could come and go without being noticed.

"No, Bacchus. I have given this great consideration. I have searched the modern mortal world. Las Vegas provides the perfect setting with its fanciful mortal re-creation of Caesars Palace and The Forum. " Zeus chuckled, remembering the silliness he had glimpsed through the portal.

"But Las Vegas is my realm! You know how much time I have devoted to making Caesars Palace and The Forum mine. They will be meddling in a part of the world I have chosen as my own. "

Zeus' head snapped around, and his eyes blazed. "You presume too much! Have you forgotten that I rule supreme amongst the gods?" Thunder rolled threateningly in the background.

"Do not forget yourself again, Bacchus. What I have given, I can also take away. " He stared hard at the lesser deity before returning to his scrutiny of the crowd. "Look at them. The portal has only been opened to them for a short time, but already I feel a change. Even the nymphs have become excited. " He paused, scowling as he remembered how too many of the lovely semideities had chosen to be made stars and flowers and trees because they had become so bored with their lives. "Exuberance. . . that is what Olympus has lacked. And that is what Las Vegas has breathed into us once more. "

"But Lord. " Bacchus covered his growing anger and pitched his voice to a concerned, paternal tone. "You know what happens when gods and goddesses become too involved in the lives of mortals. Think of Troy. Remember Medea and Jason. Consider what became of Heracles and Achilles. Are you willing to doom the world of modern mortals to chaos and heartache?"

"I do not need to be lectured by such as you, Bacchus. " Zeus' voice remained controlled, but his warning was clear. Then, changing moods as easily as a spring storm cleared from the mountains, he smiled. "But I have already considered such things. I have set into place certain . . . restrictions" - Zeus drew the word out carefully, his eyes gleaming - "which I intend to announce tonight. My children will simply be gracious visitors, enjoying a much-deserved sojourn in the Kingdom of Las Vegas. " He shifted his head so that Bacchus could see his stern, majestic profile. "This discussion is over. My will stands. "

Bacchus had no choice but to bow and retreat respectfully from the balcony, but his mind seethed. Once again his needs were to be ignored as Zeus played favorites. He had made Vegas his own. They worshiped Baccus there. At The Forum he commanded the attention of an audience of mortals every day. They cheered for him. They adored him. And now he was to share his realm with the young, beautiful darlings of Olympus?

"We shall see. . . " he whispered between clenched teeth as Zeus' voice thundered from the balcony, calling the attention of the Banquet Hall to attentive silence.

"Beloved children!" Zeus beamed at the gathering. "It pleases me greatly that you enjoy my latest gift. " He stretched his arms, palms open, towards the two pillars that stood in the center of the hall, between which an opaque disk of light quivered and swirled. "This evening I announce more news - I have decided that the portal may be open to our lovely legions of nymphs, as well as the young Olympians!" Excited gasps from the minor female deities and semideities present sounded like sweet music to Zeus. "But remember, my beauties, you are entering a world unused to having gods such as us walk amongst them. You do not go to meddle with mortal affairs but rather to observe and to delight in a unique world. Lest you be tempted to forget that you are only there to visit, I have decided that the portal shall only be opened at limited times. "

The glowing faces below him all remained upturned and listening. Zeus searched the crowd until he found Demeter standing regally beside her daughter. He inclined his head to her in respectful acknowledgment before continuing.

"The Goddess of the Harvest has informed me that modern mortals enjoy most of their revelry during a small cluster of days which they call a weekend. So it is during mortal weekends that our portal will be open. You have from dusk on their Friday evening to dawn on their Monday to frolic with the modern mortals. "

With a small gesture of one hand, he silenced the enthusiastic whispers that his words evoked.

"And now, I give to you the Kingdom of Las Vegas!" The Thunder God clapped his hands together, and the crowd cheered as the sky roared in response.

Below in the Banquet Hall Artemis laughed and shook her head fondly at Zeus before turning her attention back to her brother.

"Father is certainly pleased with himself," she said.

Apollo shrugged. "I don't understand the excitement. It is simply the modern world of mortals, not a new Olympus. "

Artemis raised one perfect, golden eyebrow at him. "Thus said by the god who spent months spying on a modern mortal in the Kingdom of Tulsa. "

"I was simply performing a favor for Demeter," he answered a little too nonchalantly.

Artemis said nothing, but she studied her tw
in as he flirted halfheartedly with a violet-tressed nymph who had stopped to talk in excited little bursts about visiting the Kingdom of Las Vegas. There was no doubt about it. Apollo had been behaving oddly ever since the Persephone debacle.

Artemis sipped her ruby-red wine, remembering how her brother's surprise at Persephone's sudden rejection and odd infatuation with Hades had turned to outright shock when it had been discovered that the soul that had temporarily inhabited the goddess's body had been that of a mortal woman. Persephone herself had been masquerading as a mortal on modern earth. So it was a mortal woman who had rejected Apollo and fallen in love with the God of the Underworld. Artemis' lovely lips curled into a sneer. Mortals. In her experience they either whined pathetically and needed constant care or were so ridiculously hubris-filled that they self-destructed. All in all, they were only good for mild amusement or dalliance. Not that she would ever want to dally with one, but her brother was of a different mind. Often he had laughed and shared tales with her about his latest seduction of a hopelessly naive young maiden. Artemis took another long drink from her goblet. It was good for a mortal to be gifted by the love of a god. Mortal women should be grateful to be noticed by such a god as her twin brother.

The chattering nymph had drifted away, leaving Apollo to gaze silently at the swirling portal. Perhaps that was it. Apollo needed a diversion. Her brother had spent too much time lounging aimlessly around Olympus, brooding about the silly mortal's rejection. He needed to remember that mortals were weak beings who lived the span of their frantic lives within the blink of an eye. They were easily manipulated - then easily cast aside.

A slow smile spread over her flawless face. What better place for him to be reminded of the insignificance of mortals than in a modern world teeming with the creatures?

"Come, Brother," she said with a cheery smile. "Let us visit the Kingdom of Las Vegas. "