&quot;Popguns &amp; Pacemakers&quot; &mdash; Patriotism, in a small town, and other tales of The Great American Westerly Midwest, Page 1 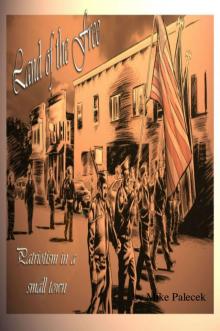 … Patriotism, in a small town, and other tales

of The Great American Westerly Midwest

[Robert S. Thompson, a gentleman on a bench on Main Street]

On November 11 we honor the veterans of our nation’s wars.

Why honor the killing, the stealing of other nations’ resources, not to mention the starving of our own people, for the military.

And our military does not protect our freedom with all this killing.

The members of the United States military are thugs, enforcers for the empire.

If we really wish to honor those who have given us the good life, look to those who fought and died and suffered prison to win for us the eight-hour day, minimum wage, to end to the Vietnam War.

In fact, America is enslaved by its military.

If it were not for the billions of dollars that go to the Armed Forces, for no good reason, we would have health care, a thriving economy, good schools, good roads.

If America survives the tyranny of the Bush-Obama era it will be because of those who are now fighting for our freedom, here, in the streets of America.

If America continues down its current path toward fascism, it will be at the will of the rich, by way of the hands of the enforcers — the police and the military.

If you are enjoying your freedom today — thank a protester.

I did not used to ever write about war in my letters to the editor. I much preferred sidewalks and curb and gutters.

But Thomas Moskowitz’ brother is coming home today, in a bag inside a box, and I am past tired of all this shit.

Tommy stopped by the other day and told me. He sat here on my bench with me for over an hour. We even took time to go into the café and Nona gave us free Coke and refills.

I really must tell you, before it is too late.

I couldn’t care less about your soybeans, your corn.

I could give a shit whether the hail destroys your new car, how much your gas costs.

Don’t talk to me about your football team, your hunting, your grass, your fucking kids.

Eat your hamburgers, your donuts.

There are three-headed babies being born in Fallujah today because of the chemicals we used to kill. The United States won’t support the world court because we would be the first ones in the dock.

You talk about rain, about rhubarb, about the game, your lawn, your house, your damn kids.

There is a world out there.

And nobody gives a flying rat’s behind about your grass.

There are real things out there, bullets, war, poor families.

Your children are not real, not really, and your grass and your home and whatever else you have hanging neatly in your garage, are illusions, someone’s fantasy, and we really have no time for all that nonsense, not anymore.

I’m so sorry, but you will have to excuse me. I need to go home.

I need to lie down.

[Tommy Michael Moskowitz, a kid on his bike]

I’m sitting on my bike on the sidewalk.

My brother is over there, inside that house.

Setting the world on fire.

That’s what Billy told me he was gonna do when he got big.

He’s in a box here inside Frog’s Funeral Home. Frog’s a kid in my class, not my class, he’s one year older.

It’s in their house, the funeral home.

I’m going to go ride my bike and remember my brother, and maybe to the park, but I don’t know yet.

And then Billy runs out onto the field with the rest of the starting defense.

“Billy, have you washed your hands for supper?”

“Billy, could you please come up to the board and complete problem fifteen for us?”

“Billy, why do you do this to your mother and I?”

That was when my brother graduated. They said his name and he turned when he was walking across the stage and he looked right at me and smiled.

I smiled back and we each gave the thumbs-up.

He looked right at me, out of that whole crowd.

He was already going to be a soldier by then. Because of that one day me and him was at the mall.

I wanted to get a Transformers action figure. If it wasn’t for me and those Deceptacons.

We went to the mall. We walked. It’s not that far.

The recruiter Army man came out by the pop machine and started talking to us about Mountain Dew and baseball.

He wanted to see my new toys.

Billy asked a couple of questions and then we went in to the recruiter offices to sit down and read sports magazines and eat little Snickers and Milky Way from a plastic Jack-o-Lantern.

Billy went to basic training in Georgia in the summer before school started.

He wrote a letter to Mom telling her everything was fine, all the guys were great, and they were playing football in the barracks, using a bunch of rolled up green socks for the ball.

The letter he wrote to me told me to not tell Mom. It had teardrop stains is what it looked like. He said he wanted to go home. He was scared. He said the recruiter told him they don’t get in your face anymore, but that’s all they do is get in your face and call you faggot and pussy.

He said they march and march and sing songs about killing people and they … Oh, God. He said his bunkmate tried to commit suicide by hanging off their bed, and he said two guys from his unit raped a kid from another unit and now they’re in the base jail, stockade.

We all went there, Mom’s brother Rick drove, to his graduation.

Billy was supposed to have a free day before graduation but he got in trouble and had to clean something with a toothbrush. We sat in the motel room, all of us, watching golf on TV and going to the bathroom and listening to car doors open and shut in the parking lot.

But Billy marched past and he looked at me and smiled. I don’t think he was s’posed to. He supposed to look tough.

Then we got to take him home with us. We stopped at the first KFC. Everyone else got the buffet. Billy and I got a bucket of original recipe and got our own table and we didn’t look up until it was gone.

Billy went back to school for his senior year the next week, but he was already too old for school.

My brother went to World Cultures and Chem II and Spanish III.

He sat there and spoke when called on, but he was thinking the whole time about war, about war movies and war songs and him the one charging through the line or running away, him the one rushing into the surf or pushing his way to the back of the landing craft.

It was him lying on the floor of the jungle screaming in pain and his crotch a sticky bloody mess, and all he really really wants is to take a hot bath and put on new Christmas pajamas and drink hot cocoa and be warm.

H
e thought all the time about war.

And then he left.

Me and Mom drove him and then we waved at him and the others on the buses leaving town. We followed in the car for almost an hour. We stopped and Mom cried by the side of the road. Then we came home and she made us grilled cheese sandwiches.

Billy wrote lots of letters, especially when he was still here, over here in this country.

He told us about the more training he was doing and the guys he knew and he smoked a cigarette once. “Never again,” he said. Mom said she hoped he sticks to that, they’re not good for you.

Then he took a big plane over the ocean.

It was hot there and he smoked cigarettes. He said, don’t tell Mom. I didn’t.

There were teachers at our school who patted me on the shoulder, the head. They smiled. They knew my brother had started smoking. I didn’t tell them. Somehow they knew.

The priest said Billy’s name once from the altar. Not the altar, the … thing … the stand, the thing there where he stands.

Anyway, I don’t know. We didn’t use to ever to go, but now Mom says I have to.

I don’t even know if Mom will go outside anymore, now.

I dug the paper out of the trash. There was a big headline with Billy’s picture. It was different, not his senior one or the football one, just different.

There were some men here in soldier’s uniforms. That’s kind of why I left.

They had my brother’s stuff in a box.

Mom sat down on the couch and pulled out the stuff.

There was some letters, and pictures, a key ring, and a jacket. On the back it said something about terrorists and kill them and Mom laid down on the couch and the men left and I waited until she fell asleep.

I don’t want to go home.