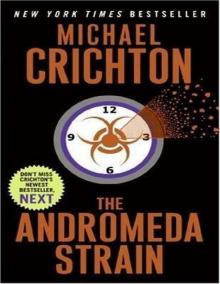 This book recounts the five-day history of a major American scientific crisis.

As in most crises, the events surrounding the Andromeda Strain were a compound of foresight and foolishness, innocence and ignorance. Nearly everyone involved had moments of great brilliance, and moments of unaccountable stupidity. It is therefore impossible to write about the events without offending some of the participants.

However, I think it is important that the story be told. This country supports the largest scientific establishment in the history of mankind. New discoveries are constantly being made, and many of these discoveries have important political or social overtones. In the near future, we can expect more crises on the pattern of Andromeda. Thus I believe it is useful for the public to be made aware of the way in which scientific crises arise, and are dealt with.

In researching and recounting the history of the Andromeda Strain, I received the generous help of many people who felt as I did, and who encouraged me to tell the story accurately and in detail.

Lastly, I wish to thank the participants in the Wildfire Project and the investigation of the -so-called Andromeda Strain. All agreed to see me and, with many, my interviews lasted over a period of days. Furthermore, I was able to draw upon the transcripts of their debriefing, which are stored in Arlington Hall (Substation Seven) and which amounted to more than fifteen thousand pages of typewritten manuscript. This material, stored in twenty volumes, represents the full story of the events at Flatrock, Nevada, as told by each of the participants, and I was thus able to utilize their separate viewpoints in preparing a composite account.

This is a rather technical narrative, centering on complex issues of science. Wherever possible, I have explained the scientific questions, problems, and techniques. I have avoided the temptation to simplify both the issues and the answers, and if the reader must occasionally struggle through an and passage of technical detail, I apologize.

I have also tried to retain the tension and excitement o events in these five days, for there is an inherent drama in the story of Andromeda, and if it is a chronicle of stupid, deadly blunders, it is also a chronicle of heroism and intelligence.

The Andromeda Strain by Michael Crichton / Science Fiction / Thrillers & Crime have rating 4.5 out of 5 / Based on18 votes