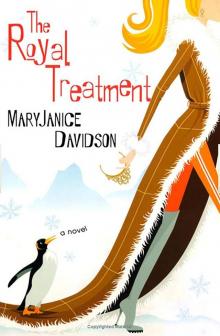 From The Queen of the Edge of the World, by Edmund Dante III, © 2089, Harper Zebra and Schuster Publications.

Even today, with all the comforts of a peaceful twenty-first century, Alaskans are a hardy group, and none more so than the royal family. There's a saying in this part of the world: Alaskan royals wrestle bears, but only after tea.

This hardiness was vital for a young vast country. Alaskans had to be tough, not only to break from Mother Russia in 1863, but to then go on and form their own government. It could not have been easy, but the royal family rose to the occasion.

Historical records confirm King Alexander adored his daughter-in-law from the moment he set eyes on her. With characteristic impulsiveness, he decided this tough, uncompromising commoner would be perfect for his son, the Crown Prince David.

Of course, convincing His Highness the Prince, not to mention the woman who would eventually become the mother of kings, was no simple matter. . . .

Nobody really knows me, and I don't really know anybody. But that's okay.

"If you ever touch me again, I'll pull off your ears and stuff them up your nose. "

Christina Krabbe explained this fact of life to her supervisor, who was at the moment rolling around on the deck, cradling his mashed privates.

Never should have gotten out of bed. Should have tossed the clock on the floor and gone back to sleep.

But she'd never been late for work a day in her life, and if she didn't crack eight hundred eggs for Friday's rosemary scrambled eggs, who would?

Christina had known there would be trouble, almost from the moment she came on board. Ed had "accidentally" brushed her butt or a breast a million times. Never enough to be called on his behavior, always enough to make her dread the next time she ran into him. She was just surprised her boss had taken this long—almost three weeks—to make his move.

But today. . . coming up behind her and grabbing her boobs like she was a cow to be milked . . . she'd back-kicked and elbow-struck, and then he was on the floor and it was done and couldn't be taken back. Not that she would.

His lips were moving. She bent closer to hear.

"Uh-huh. What's the phrase? You can't fire me, I quit? Is that it? I ought to sue your ass, Ed, you lecherous piece of shit. But frankly, you're not worth the time, the trouble, or the aggravation. " Also, I have no money for a lawyer. But never mind.

She threw her belongings into a duffel bag while he recovered, climbed painfully to his feet, and shuffled out the door. She didn't watch him go. She'd worry about a reference later.

She marched down the gangplank, flashed her employee badge to the guy counting noses, then promptly dropped it into the garbage can at the end of the dock and fell in line behind the geese.

At least they were in port. If Ed had tried his crap while they were at sea, she'd have had a long swim ahead of her.

One of the tour guides—the line employed several dozen, and she could never keep them straight— was doing Alaska 101 for the geese. Christina eased her way past the throng, half-listening to the spiel.

"—Russia did actually offer Alaska to the United States for sale. As you know, America had the Civil War to contend with, and thus wasn't interested in the purchase at that time, but can you imagine if they had? Alaska would have been the forty-ninth state!"

And since gold and oil were discovered here, we've been kicking ourselves about that ever since, Christina thought, smothering a chuckle.

The tour guide droned on while Chris put the gangplank, the ship, Ed, and French Toast Tuesday behind her.

The Summer's Sweetness—an exquisitely stupid name for a cruise ship—was leaving port tonight. She had no plans to be on it. She wasn't going near Ed again—he might get the idea in his head that a little payback would be balm to his battered ego. Some men were weird that way. Knock them around defending yourself, and they decide the only way to fix it is to hurt you back twice as bad.

When the ship sailed, she'd still be in port. Marooned in Juneau, Alaska, over a thousand miles from her birthplace. Marooned at the edge of the world, in a place with a famously nutty royal family and more bears than cars.

From The Queen of the Edge of the World by Edmund Dante III, © 2089, Harper Zebra and Schuster Publications.

King Alexander II, head of the House of Baranov, was, as was most of the royal family, a conundrum. Raised to wealth and privilege, he had a common streak. However, he was rarely allowed to "get down and dirty," as His Majesty might have put it, due to his responsibilities, the hovering of his major-domo, Edmund Dante, and his bodyguards.

Often His Majesty would let his beard grow and take a group out fishing. This drove people mad, in particular: (A) his security team, (B) Edmund Dante, and (C) the people in his fishing group. King Alexander was always surprised to be recognized, and once he was, quite a lot of the fun went out of the group. It was difficult for Alaskans to enjoy a day of leisure when they realized their sovereign was the one driving the boat and gutting the fish.

"We're catching tons of fish, but you haven't cracked a smile all afternoon. " The captain of the boat plunked down beside her, stretched out his long legs, and stared at the toes of his rubber boots. "What's the matter, kid?"

"Well. . . " She looked at the other members of the fishing party, who were all huddled on the other end of the boat, staring at them. Weird. It had been a pretty jolly group earlier, and now they were walking around like there was glass in their boots. "I'll tell you my problem, if you tell me theirs. " She jerked her head in the direction of the group.

"Okay. Well, I kicked the shit out of my boss for copping a feel, got myself fired, again, I'm marooned in a strange country, again, and I used my last fifty bucks to come fishing. I mean, how dumb am I?"

The captain looked puzzled. He was a big man, wide through the shoulders, and quite a bit taller than she—and at five-ten, Christina wasn't short. He had bushy, salt-and-pepper hair, an equally bushy beard threaded with silver, and blue eyes that smiled even when his mouth didn't.

"How dumb are you? About which part?"

"The 'spending my last dime on this boat' part. I mean, hello, I could have waited until I found another job, right? Dumb. No excuse. " She sighed and stared out at the ocean. "But I just wanted to— wanted to—"

"Do something you loved for a change. I don't think that's so dumb. "

"No excuse," she said gloomily. "Work first. Assuming I'll be able to work in this country. I mean, I've got a passport, but—never mind, I'm getting off track. Because the rest of it, not so dumb. I mean, what was I supposed to do? Let him grab? Forget it. He's lucky I didn't kick his balls up into his throat. "

The captain was nodding, which cheered her up a little. "Damn right. He got what he deserved. If somebody did that to one of my daughters . . . " His hands closed into fists that were, she observed, the size of bowling balls.

"Right. We've now established that kicking ass is the way to go. But that doesn't exactly help me out. I've got to find a job. I guess first I have to find out if I can stay. "

"You can stay," t
he captain said.

"That's nice, but I'd better check it out for myself, don't you think?"

"I've got that kind of face," he said vaguely.

"Oh. Anyway, all my worldly possessions are in a locker at the library, but—"

"What about your folks?"

"My dad took off when I was just a baby, and my mom died when I was in high school. There's just me. "

Now it was her turn to shrug. She certainly wasn't getting into the whole "been on my own since I was sixteen" thing. He seemed like a nice, friendly, older guy, but there were limits.

"I'm—I mean, I was—a cook on a cruise ship. And spare me the whole 'cruise ships are ruining Juneau' speech—I've heard it before from the townies. "

She stared at him. "Seriously—you look really familiar. Are you sure we haven't met, or—"

"What are you going to do when we get back to port?"

"Thanks. That's really nice of you. " She was sincere, but being mate on board a fishing boat was not her idea of a good time. It was messy, it was hard work, the pay sucked, and the tourists were annoying. "And I might take you up on it. " Beggars, after all, couldn't be choosers. "But I'd better look around myself, first. "

"Do you have a boyfriend?"

"Captain, am I going to have to kick your ass today, too?"

"Haw! You're young enough to be one of my kids. I'm too old for that shit. But I've got a son, he's a little older than you—what are you, twenty-three, twenty-four?—and I think you'd be—"

She held up her hands like a traffic cop. "No, thanks. The last thing I need right now is a blind date. "

"Well, where are you sleeping tonight?"

"Seriously. Am I going to have to kick your ass?"

He laughed again. It was comforting—he had a big, booming bear laugh—but strange. It was like he got a huge kick out of being threatened. Like it never happened to him, so it was funny when it did. Most people did not laugh when she threatened them with bodily harm.