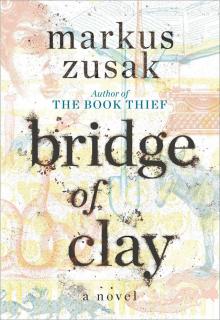 I Am the Messenger

THIS IS A BORZOI BOOK PUBLISHED BY ALFRED A. KNOPF

This is a work of fiction. Names, characters, places, and incidents either are the product of the author’s imagination or are used fictitiously. Any resemblance to actual persons, living or dead, events, or locales is entirely coincidental.

Excerpt from Gallipoli (1981) reprinted with permission from David Williamson AO

Excerpt from Mad Max (1979) reprinted with permission from George Miller

All rights reserved. Published in the United States by Alfred A. Knopf, an imprint of Random House Children’s Books, a division of Penguin Random House LLC, New York.

Visit us on the Web! GetUnderlined.com

Educators and librarians, for a variety of teaching tools, visit us at RHTeachersLibrarians.com

Description: New York : Alfred A. Knopf, 2018. | Summary: Upon their father’s return, the five Dunbar boys, who have raised themselves since their mother’s death, begin to learn family secrets, including that of fourth brother Clay, who will build a bridge for complex reasons, including his own redemption.

Before the Beginning: The Old Tw

Portrait of a Killer as a Middle-Aged Man

Warming Up the Clay Way

The Greeks Got Him

The Human Ball and Chain

She Cried All the Way to Vienna

The Forces Are Displayed

The Killer in His Pocket

The Arsemover and the Minotaur

The Spoils of Freedom

Carey and Clay and Matador in the Fifth

Death in the Afternoon

A Gallery of Abbeys

Five Years and a Piano, and Following Hand Over Hand

The Lives Before They Had Us

The Boy with Bleeding Hands

Paintwork at the Piano

The Boy Who Climbed from the Oven

War of the Roses

The House at Eighteen Archer Street

The Violence of Brothers

The Tw, the Snake, and Moon

Growing Up the Dunbar Way

The Woman Who Became a Dunbar Boy

When Boys Were Still Boys

The Girl Who Climbed from the Radio

The Horse from the Riverina

Survival of the Dunbar Boys

Love in the Time of Chaos

The Hand Between the Sandhills

Carey Novac in the Eighth

The Girl at Gallery Road

The Figures in the River

Matador vs. Queen of Hearts

Joker in the Hallway

Before First Light Had Hit the House

Pact with the Devil

The Seven Beers of Penny Dunbar

The Walking Tour of Featherton

Football in the Riverbed

The World Cup of Dying

Portrait of a Father as an Older Man

The Hour of Greatest Water

After the
End: The Old Tw, Revisited

For Scout, Kid, and Little Small,

and in loving memory of K.E.:

a great lover of language

In the beginning there was one murderer, one mule and one boy, but this isn’t the beginning, it’s before it, it’s me, and I’m Matthew, and here I am, in the kitchen, in the night—the old river mouth of light—and I’m punching and punching away. The house is quiet around me.

As it is, everyone else is asleep.

I’m at the kitchen table.

It’s me and the typewriter—me and the old TW, as our long-lost father said our long-lost grandmother used to say. Actually, she’d called it the ol’ TW, but such quirks have never been me. Me, I’m known for bruises and levelheadedness, for height and muscle and blasphemy, and the occasional sentimentality. If you’re like most people, you’ll wonder if I’d bother stringing a sentence together, let alone know anything about the epics, or the Greeks. Sometimes it’s good to be underestimated that way, but even better when someone sees it. In my case, I was lucky:

For me there was Claudia Kirkby.

There was a boy and a son and a brother.

Yes, always for us there was a brother, and he was the one—the one of us amongst five of us—who took all of it on his shoulder. As ever, he’d told me quietly, and deliberately, and of course he was on the money. There was an old typewriter buried in the old backyard of an old-backyard-of-a-town, but I’d had to get my measurements right, or I might dig up a dead dog or a snake instead (which I did, on both counts). I figured if the dog was there and the snake was there, the typewriter couldn’t be far.

It was perfect, pirateless treasure.

I’d driven out the day after my wedding day.

Out from the city.

Right through the night.

Out through the reams of empty space, and then some.

The town itself was a hard, distant storyland; you could see it from afar. There was all the straw-like landscape, and marathons of sky. Around it, a wilderness of low scrub and gum trees stood close by, and it was true, it was so damn true: the people sloped and slouched. This world had worn them down.

It was outside the bank, next to one of the many pubs, that a woman told me the way. She was the uprightest woman in town.

She was brown-haired, well-dressed, in jeans and boots, plain red shirt, an eye shut tight to the sun. The only thing betraying her was an inverse triangle of skin, there at the base of her neck; it was tired and old and crisscrossed, like the handle of a leather chest.

“What number you lookin’ for, anyway?”

“Oh, you’re after the old Merchisons, are you?”

“Well, to tell you the truth, not really.”

The woman came closer and I noted the teeth of her now, how they were white-and-gleaming-but-yellow; a lot like the swaggering sun. As she approached, I held my hand out, and there was she and I and her teeth and town.

“My name’s Matthew,” I said, and the woman, she was Daphne.

By the time I was at the car again, she’d turned and come back, from the money machine at the bank. She’d even left her card behind, and stood there now, with a hand at center-hip. I was halfway into the driver’s side and Daphne nodded and knew. She knew near to almost everything, like a woman reading the news.

She said it, she didn’t ask.

There I was, twelve hours from home, in a town I’d never set foot in in all my thirty-one years, and they’d all been somehow expecting me.

It was a long time we looked at each other then, a few seconds at least, and all was broad and open. People appeared, and wandered the street.

I said, “What else do you know? Do you know I’m here for the typewriter?”

She opened the other eye.

She braved the midday sun.

“Typewriter?” Now I’d totally confused her. “What the hell are you talkin’ about?”

Almost on cue, an old guy started shouting, asking if it was her bloody card holding up bloody traffic at the bloody bank machine, and she ran back up to retrieve it. Maybe I could have explained—that there was an old TW in all this story, back when they used typewriters in doctors’ surgeries, and secretaries bashed at the keys. Whether or not she was interested, I’ll never know. What I do know is that her directions were spot-on.

A quiet assembly line of small, polite houses, all baking in the heat.

I parked the car, I shut the door, and crossed the crispy lawn.

It was right about then I regretted not bringing the girl I’d just married—or actually, the woman, and mother of my two daughters—and of course, the daughters themselves. Those kids, they would have loved this place, they’d have walked and skipped and danced here, all legs and sunny hair. They’d have cartwheeled the lawn, shouting, “And don’t go lookin’ at our knickers, right?”

Claudia was at work.

The girls were at school.

Part of me still liked that, of course; a lot of me liked it a lot.

I breathed in, and out, and knocked.

Inside, the house was oven-like.

The furniture all was roasted.

The pictures just out of the toaster.

They had an air conditioner. It was broken.

There was tea and Scotch Fingers, and sun clapped hard at the window. There was ample sweat at the table. It dripped from arm to cloth.

As for the Merchisons, they were honest, hairy people.

They were a blue singlet of a man, with great big sideburns, like fur coat meat cleavers on his cheeks, and a woman named Raelene. She wore pearl earrings, tight curls, and held a handbag. She was perennially going to the shops, but stayed. From the moment I mentioned the backyard and that something might be buried there, she’d had to hang around. When the tea was done and the biscuits reduced to a nub, I faced the sideburns, front-on. He spoke to me fair and squarely:

“Guess we should get to work.”

Outside, in the long dry yard, I walked left, toward the clothesline, and a weathered, dying banksia. I looked back for a moment behind me: the small house, the tin roof. The sun was still all over it, but reclining, leaning west. I dug with shovel and hands, and there it was.

Both of them nothing but bones.

We combed them close and careful.

We placed them on the lawn.

The man said it three times, but loudest of all when at last I’d found the old Remington, bullet-grey. A weapon in the ground, it was wrapped in three rounds of tough plastic, so clear I could see the keys: first the Q and the W, then the midsection of F and G, H and J.

For a while I looked at it; I just looked:

Finally, I reached in and hauled it out, with careful, dirty hands; I filled in all three holes. We took it out of the packaging, and watched and crouched, to examine it.

“A hell of a thing,” said Mr. Merchison. The
fur coat cleavers were twitching.

“I didn’t think this was going to happen when I woke up this morning.” He picked it up, and handed it across.

“You want to stay for dinner, Matthew?”

That was the old lady, still half astonished. Astonishment didn’t trump dinner.

I looked up from my crouching stance. “Thanks, Mrs. Merchison, but I’m hurting from all those biscuits.” Again, I eyed the house. It was parceled up now, in shade. “I should actually get going.” I shook the hand of each of them. “I can’t thank you enough.” I began to walk on, the typewriter safe in my arms.

Mr. Merchison was having none of it.