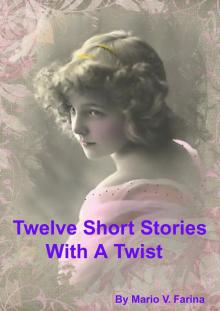 No part of this book may be reproduced or transmitted in any form or by any means,

Electronic or mechanical, including photocopying, recording or by any information

Storage and retrieval system, without prior written permission of the author.

Correspondence may be directed to:

These are twelve stories with a twist. This means that the stories have a surprise at the end. Part of the enjoyment of reading these stories will come from try to guess what the ending is like.

The titles of the twelve stories are these:

A Meal To End All Meals

The Woman In The Diner

Woman On The Phone

Thou Art A Witch

A Reenactment To Justice

"I should think you'd remember the most important date in our relationship," Wendy murmured, tears forming around the edges of her eyes. "You could have, at least, given me a card."

Ben realized how badly he had hurt his wife. True, he wasn't much for ceremony, but he should have known better. It had been less than a year after he met Wendy that he realized she was the one for him.

Wendy had been a math instructor in the same school where he taught computer science. They began dating, and as they did so, he discovered that she was a no-nonsense observer of holidays just as he was. It was a perfect match. So why was she complaining that he had not remembered their first wedding anniversary?

Women are different, he decided. A part of them says one thing but they really want something else. He was going to learn from this experience and not make the same mistake again.

But habits are strong. Ben would think about June 19 every so often, but most of the time, the date dwelt in the hinterlands of his brain. As the date drew near for his second anniversary, the fact that it wasn't uppermost in his mind alarmed him. To avoid the horrible blunder of the year before he composed a short computer program that would remind him of the date every day from June 1 until the actual anniversary date. He tested the program to make sure it would work.

On June 1, when Ben started his computer, the screen simulated a brilliant explosion of sun-bright lights which quickly turned to a midnight blackness with stars streaking at the speed of light from the inner cores of galaxies to the outer edges of the universe. This spectacle was repeated several times after which the normal start-up procedure took over. Ben smiled There was no way he would experience this panoply and not remember the anniversary.

Day after day, the display materialized; June 2, June 3, June 4! The program was working splendidly! On the next day, Ben paid less attention to the message. After all, he knew what it was and what it meant. On the next, he paid even less attention. By the time June 10 arrived, Ben was accepting the message as part of the computer's startup procedure.

Then, June 18! It was a Saturday. At the breakfast table, Wendy mentioned that she needed to pick up some things at the supermarket. It was important she do this, she declared. This started a train of thought in Ben's psyche "Why important," he wondered? The word, important, vibrated like a tuning fork in his being.

Important! Important! Suddenly, he stiffened as if struck by lightening. Tomorrow was indeed important! Tomorrow was June 19! "Fool," he shouted inwardly to himself! How could he had forgotten the importance of June 19?

He needed to do something and he needed to do it quick! Otherwise, he was going to be in the kind of deep trouble that only a victim of a woman scorned could know!

Wendy had left the house taking the SUV. The only vehicle available was the bicycle. This would work! There was a florist on Sixth Avenue only a couple of blocks away. They sold cards. Ben decided to splurge and purchase a bouquet of flowers as well as a card. He wheeled the bike out of the garage, vaulted to the seat and sped to the shop. Broadly beaming, he stood the bike on its kick stand, hastened to the shop's ornate door and entered. He made his way quickly to the card section.

Where were the anniversary cards, he wondered? Ah, there was the sign! The place was packed. Customers blocked his way. No matter, he bulldozed his way through and began perusing the cards. It was important he select an appropriate card!

Something made him turn toward the figure standing next to him. His eyes met those of the other person. They were familiar and so was the face! "Wendy!?" he managed to stammer, as she gasped in like manner, "Ben!?"

Cora Fielding, Forewoman of the jury, took a vote as soon as the five men and seven women had been seated. She announced the result had been eleven votes for innocent and one for guilty. Ms. Fielding, about 35, overweight, blond with streaks of gray asked, "Would the person who voted guilty care to identify himself or herself?" Janet Carter raised her hand. Puzzled, Ms. Fielding stared at her. "You don't look familiar," she said. "Are you one of the jurors? What is your name?"

"I'm registered with you as Mary Carter," responded the juror. "My real name is Janet Carter." Mystified, the other members of the jury remained silent. "This is bizarre," commented Ms. Fielding. What did you do, switch places with Mary Carter? "No," responded, Janet. "I'm the same person that entered the room. I took on a different appearance and name while we were voting."

"Nonsense," retorted the forewoman angrily. "What's going on here? As I recall, the other person was young with dark hair. You're, at least, thirty years older! How did you get in here? Where is the other person?"

"I know this will cause a mistrial," said Janet. "I have a special reason to being here. The other person was me as a young woman. My present appearance is as I was when I died! We're here to judge the innocence or guilt of Jerome Carter. He's accused of killing his wife, Janet Carter. Most people think this trial is a farce since there was no physical evidence linking him to the crime. I'm here because I know he's guilty! I am the person he killed!"

The silence in the room continued but its character changed from mysticism to shock. There was not so much as a murmur in the room. After several seconds, Ms. Fielding found her voice. "Do I understand that you are claiming to be the murdered person?"

"How can we believe that? What can you show? What is your objective in being here?" gasped Ms. Fielding.

"I do have a purpose," responded, Mary. "Whether you believe what I'm saying or not, does not matter. I want this jury to file back into the courtroom and have Jerome see me, a year after he shot me. We need to see his reaction."

"I can't agree to that," Ms. Fielding shouted. "As forewoman of this jury, it's my duty to report this to the judge at once. This is for him to handle." She picked up the phone. "Open the door," she commanded. "We're coming back. Now!"

She led ten jurors to the door. Janet followed slowly several steps behind.

There were still several persons in the courtroom. The judge was standing behind the bench speaking to his adjutant. Jerome Carter, the defendant, middle aged and balding, was seated absorbed in a discussion with his lawyer. The prosecutor was having an animated conversation with several reporters.

A great deal of confusion ensued as eleven members of the jury seated themselves. "What is the meaning of this?" demanded Judge Allen. "Your honor," began Ms.
Fielding but didn't get any further. Janet was walking through the door when Jerome Carter caught sight of her. He hesitated for a moment, then rose shakily.

Janet pointed her finger at him. "I've come back, darling," she shouted. With color draining from his face, Jerome sank back into his chair.

"Yes, it's me, lover," Janet continued. "Do you have anything to say to your adoring wife? Speak! Though I'm already dead, I'm dying to hear your voice!"

You're dead! Go back. Go back to wherever you've come from." He clapped both hands to his eyes and began to sob.

"I'll go now, beloved," responded Janet. "But I won't be far. Stray not one step from the path you need to walk!"

She vanished. The room was quiet except for the tumultuous sounds of Jerome's continuing sobs.

A Meal To End All Meals