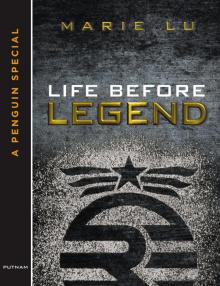 I live in the Republic of America.

My name is Day.

My name used to be Daniel Altan Wing, younger brother to John, older brother to Eden, son to a mom and dad who lived in Los Angeles’s slum sectors.

When you’ve been poor all your life, you never really think it could be any other way. And sometimes you’re even happy, because at least you’ve got your family and your health and your arms and legs and a roof over your head.

But now I’m without most of those things. My mother and brothers think I’m dead. I have an injured knee that might never heal. I live on the streets of Lake sector, a slum sitting along the shore of Los Angeles’s giant lake, and every day I manage to do just enough to survive.

But things could always be worse, yeah? At least I’m alive; at least my mom and brothers are alive. There’s still hope.

This morning I’m perched on the balcony of a three-story, torn-up apartment complex that has all its windows boarded up. My bad leg dangles over the edge while I lean casually on my good one. My eyes are fixed on one of the piers lining the lakeshore, its waters glittering through the haze of morning smog. All around me, JumboTrons on the sides of buildings broadcast the latest Republic news above the steady, never-ending stream of Lake sector’s factory workers. Several streets over, I can see a crowd of boys and girls heading off to the local high school. They seem like they’re around my age—if I hadn’t failed my Trial, I’d probably be walking with them. I look up and squint at the sun.

Pledge is about to start any second. I hate that goddy pledge.

The newsreel running on the JumboTrons pauses for a second, and then a familiar voice rings out across the city from every building’s speakers. Along the streets, people stop whatever they’re doing, turn to face the direction of the capital, and then raise their arms in salutes. They chant along with the speaker’s voice.

I pledge allegiance to the flag of the great Republic of America, to our Elector Primo, to our glorious states, to unity against the Colonies, to our impending victory!

When I was really little, I’d say this pledge like everyone else, and for a while I even thought it was pretty cool, declaring my undying love for our country or whatever. Now I just stay silent throughout the whole thing, even though all the people on the streets recite the lines obediently. Why bother playing along to something I don’t believe in? It’s not like anyone can see me up here, anyway.

When it’s over and the streets’ bustle returns, the JumboTrons switch in sync back to a newsreel. I read the headlines as they roll:

“Ugh,” I snort in disgust. No doubt that girl’s some goddy rich trot living the sweet life farther inland, in one of LA’s upper-class sectors. Who cares what she scored on her Trial? The whole test is rigged in favor of the wealthy kids, anyway, and she’s probably just someone with average smarts who bought her high score. I turn away as the headline goes on, listing the girl’s gaggle of achievements. The whole thing gives me a headache.

My attention wanders back to the pier. One of the boats has workers bustling along its deck. They’re unloading a bunch of crates that probably have canned food inside, stacks of beef hash and potatoes and spaghetti, sausage and pygmy pig hot dogs. My stomach rumbles. First things first: stealing breakfast. I haven’t eaten in almost two days, and the sight of the crates makes me light-headed.

I inch along the side of the apartment complex, careful to stay inside the building’s early-morning shadows. A few street police are patrolling the pier, but most of them look bored, already exhausted by the day’s humid heat. They usually don’t pay attention to the street orphans that sit on practically every corner of the Lake sector, and on a good day, they’re too lazy to catch all the ones that attempt to steal food.

I reach the edge of the building. A drainage pipe runs along the side, shakily bolted to the wall. Still, it seems strong enough to support my weight. I test it first by tentatively putting one foot against it and giving it a good push. When it doesn’t budge, I grab the pipe and slide all the way down into the building’s narrow alley. My bad leg hits the pavement wrong—I lose my balance, then fall backward onto the ground.

One of these days, this stupid knee will get better. I hope. And then I’ll finally get to shimmy up and down these buildings the way I want to.

It’s a warm day. The smells of smoke, street food, grease, and ocean salt linger in the air. I can feel the heat of the pavement through my threadbare shoes. Hardly anyone notices me as I limp toward the pier—I’m just another slum sector boy, after all—but then a girl heading off to school meets my gaze. She blushes when I look back, then quickly glances away.

I pause at the water’s edge to adjust the cap on my head, making sure all my hair is tucked underneath it. The orange and gold light reflecting off the water makes me squint. Out along the pier, workers are stacking the food crates right next to a little office where an inspector is typing up notes about the shipment. Now and then he looks away and talks into an earpiece. I stay where I am for a while, watching the pattern of the workers and the inspector. Then I glance down the street that runs along the shore.

No street police in sight. Perfect.

When I’m sure no one’s looking, I hop down the edge of the bank and limp into the shadows beneath the pier. Beams crisscross the pier’s underbelly, supporting it as it juts out into the water. I grab some rocks from the mud near the water and shove them into my pockets. Then I pull myself up into the maze of beams and start climbing through them toward the crates. Salt water sprays me. The sound of waves lapping against the pier mixes with the voices above.

“You hear about that girl too, yeah?”

“You know. The girl, the one that got into Drake at, what, twelve—”

“Oh yeah, that one. She must have parents with a deep wallet. Hey, where’d you get sent to again?”

Some laughter. “Shut up. At least I got some schooling. ”

The waves drown out their conversation again. Several muffled thuds sound out from the planks over my head. They must be stacking crates here. I’ve reached the spot right under the little office and the shipment of goods. I pause to readjust my footing. Then I climb up several beams, grab the edge of the pier’s walkway, pull myself up, and peek around.

The office is right over my head. The inspector stands on its far side, his back turned to me. I scramble quietly up onto the walkway and huddle in the shadows of the office’s wall. The rocks in my pocket clack against each other. I take one of them out while keeping my eyes turned toward the workers. Then I fling the rock toward the boat as hard as I can.

It hits the side of the boat with a loud thud, loud enough to get the attention of the boat workers. Several of them turn toward the sound—others head over to it. I take the chance and dart out from my hiding place, then make for the stack of crates. I manage to skid right behind it before anyone catches sight of me. My heart thuds frantically in my chest.

Every time I steal Republic supplies, I imagine myself getting captured and dragged off to the local police headquarters. Getting my legs snapped, like what happened to Dad. Or maybe I wouldn’t get taken to the headquarters at all. Maybe they’d just shoot me dead right on the spot. I can’t make up my mind which would be worse.

Time’s running out. I pull my pocketknife from where it’s tucked neatly against my shoe, and then jam it into the side of one of the wooden crates until it breaks through. I hack away in silence, careful to keep an eye on which direction th
e guards are looking. Most of them have wandered away by now, thankfully. Only two still remain, and even they stand a good distance away from the crates, lost in mindless chatter.

This shipment’s definitely stuffed with canned goodies. My mouth waters as I fantasize again about what I might find inside. Hot dogs and sardines. Meats of all kinds. Corn, pickled eggs, beans. Maybe even peaches or pear slices. I’d once managed to steal a fresh peach, and it was the best thing I’d ever eaten in my life. My stomach lets out a loud rumble.

I jump. My eyes dart up to see a teenage girl leaning against the crates, chewing on a toothpick and watching me work with an amused grin on her face. All my food fantasies vanish. Instantly I yank my knife out of the crate and make a run for it. The other men on the pier see me, shout something, and give chase.

I run as fast as I can down the pier. My bad knee burns from the sudden movement, but I ignore it. Bad knee won’t matter if I’m dead. I brace myself, waiting for the searing agony of a bullet in my back.

“Charlie!” one of them yells. “Get that little con!”

The girl replies with something I can’t hear.

I stumble through a pair of bewildered port workers, reach the pier’s end and the beginning of Lake’s streets, and run toward the closest alley I can see. Behind me, I can still hear the sounds of my pursuers. Stupid, so stupid. I should’ve been quieter, or waited until nightfall. But I’m so hungry. Now I just hope I can lose them in the maze of Lake’s alleys. My cap flips off my head, but I’m too scared to stop and go get it. My white-blond hair tumbles down past my shoulders in a wild mess.

Life Before Legend by Marie Lu / Young Adult / Science Fiction have rating 5.2 out of 5 / Based on31 votes