Queen Luna and the Gang of Four, Page 1 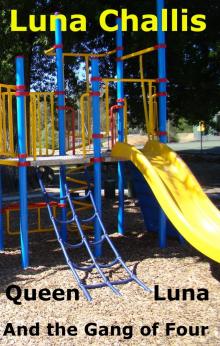 Queen Luna and the Gang of Four

Published and edited by Steve Challis

This ebook is licensed for your personal enjoyment only; it may not be resold or given away to other people. If you would like to share this ebook with other people, please purchase another copy for each person. Thank you for respecting the hard work of the author.

Fuji and the Bad Man

Fuji and the Snake

The Murderer and the Black Death

The Murder and the Murderers

The Bad Man Gets Mad

I am a queen. This statement is certainly true. I’m a female Cat and female Cats are called queens, but I am also a queen in other senses as you will find out in this book.

The little shop I manage with Michael’s help is called the Bookpost. It’s one of the main meeting places in the town of Charleston because people’s mail comes to us and they get it from our shop or the post boxes outside. Of course there are other important meeting places in town like the Charleston Hotel next door, but parts of that are restricted to people over the age of 18.

Children come into our shop. Some of them are my friends. My best friend among the children is Fuji. He loves animals, and always rubs my head gently when he picks up his family’s mail, or buys something. He’s the leader of 4 young boys who call themselves ‘The Gang of Four’. Fuji is the smallest and the youngest at only eleven years old. He’s small for his age and sometimes wears glasses for reading. He’s a nice boy, but unconventional and not always well behaved.

Fuji and the Bad Man

I was out one day and I heard the Bad Man shouting. Some of the words were bad words that I won’t repeat, but he was accusing Fuji of going onto his farm. Fuji answered:

“Why are you worried about people going on your farm? Are you afraid I’ll tell people about your tree with the dead cats hanging on it?”

As I told you in my autobiography, I had been on the Bad Man’s place and had seen his cat tree with dead cats on it. The Bad Man had tried to kill me by throwing a rock at me. I had been admiring a beautiful Sulphur Crested Cockatoo in a cage. The bird had screeched a warning to me, and I’d jumped. The rock hit the cage and damaged it.

The Bad Man’s reply to Fuji was bad. Then he chased Fuji. Fuji is a slow runner and was limping from a minor football injury. The Bad Man is fat, but I was afraid he would catch Fuji so I ran across the Bad Man’s path and distracted him. He chased me, but I went into a garden and jumped the fence. The Bad Man would have been much too slow at climbing fences to catch me.

I went home. I was sitting on Michael’s lap while he worked on the computer and Fuji came in. He bought an icecream and went and sat down at one of the inside tables to eat it. He called to me and I jumped up onto the table so he could stroke me. Fuji thanked me for saving him from the Bad Man, and gave me a little bit of vanilla icecream. I was glad Fuji had escaped; I didn’t want the Bad Man to kill him and hang him up in his cat tree, or perhaps the Bad Man only kept that tree for the cats he killed. Probably he has a boy tree somewhere else on his farm to hang up the boys he kills.

Charleston is only a small town, but we have a King. I know he is a King because when he came into the shop to get his mail, Michael would call him ‘Mr. King’. But he’s a modest man and I’ve never seen him wearing his crown.

He’s a very nice old man, and obviously a social person. He was always nice to me in the shop or when I saw him outside.

But the King was unlucky and his palace caught fire. He was rescued by neighbours and other people, but his $300,000 palace was badly damaged despite the efforts of the Country Fire Service. Mr. King was burned and had to go into hospital.

At the moment, the King is living in Queensland recovering, so as the manager of the Community Postal Agency, I’m the highest government official in the town, effectively the Queen Regent.

Here’s a picture of Queensland where the King is recovering.

Fuji and the Snake

It was an unusually hot late August day; the winter was nearly over. It was Sunday and the local children were playing Charleston’s magnificent recreation ground.

Fuji was there with his three friends. They were having odd contests on the playground equipment, using their imagination to extend the range of things they did on the bars.

The Gang of four were starting to get too old some of the games played by the younger ones.

After the children got tired they went and rested on the soft green grass of the park. Fuji and his three friends had brought small bags with them and took out an assortment of biscuits and other nice things. They shared them with the younger children. One of Fiji’s friends went off in the direction of the Bookpost and came back with some drinks and icecreams. One of the little girls wanted to give me some chocolate, but Fuji told her:

“Chocolate is poisonous to Cats.”

I was quite happy not to eat the strange smelling stuff. Fuji gave me a little bit of his Strawberry flavoured Milk. It tasted funny to me but I was thirsty and lapped it up. It was a hot day and most of the children were wearing shorts.

After I’d finished my drink, Fuji gently rubbed my head with his hand and I was contentedly purring when my super sharp eyes detected a tiny movement in the grass next to Fuji’s bare leg. Was it a mouse? If it was I would catch it and give it to Fuji. After eating his nasty smelling chocolate, a nice tasty mouse would take away the taste of the chocolate.

No, it was one of the funny animals with no legs and a forked tongue. I pounced on its tail and immediately jumped away in case it tried to bite me. Sure enough it lashed out at where I had been.

The air was filled with loud screams from the younger children. Fuji jumped up. I couldn’t understand what all the fuss was about. The funny animal didn’t even have claws so it couldn’t have scratched the children. Anyway they were worried about the animal so I decided that I would have to kill it to stop the children worrying about it. But Fuji had other ideas and grabbed me so I couldn’t get at the animal.

“Ian, you live closest; run home and tell your mum to call a snake catcher.”

Ian ran off. While Fuji held me the other two boys in the gang shepherded the younger children away from the long animal. We watched it as it slithered away. It got off the grass onto a bare area, and one of the boys took a picture with his mobile phone.

The snake got nearly to the edge of the park and went down a hole. We kept watch until a man arrived in a van with the words: “Hills Snake Catchers” on the side. The man got out a bag and a short wooden pole with a loop of wire on the end.

Fuji showed him the hole the snake had gone down. The man said:

“All right, all of you stand well back.”

The snake catcher took a small metal bottle of liquid from his pocket and poured a bit down the hole. The liquid had an unpleasant smell like the stuff Steve puts into the fuel tank of the lawn mower.

The snake came out and the man dexterously hooked it with the loop of wire and put the snake into his bag, closing the top tightly.

“It’s a Common Brown snake. It’s a bit less than a year old, but they have the second deadliest venom of any land snake in the world. This little fellow has been brewing his venom all winter and has enough to kill everyon
e in this park.”

He looked round dramatically at the children.

“What will you do with it now? Are you going to kill it?”

“No, they’re protected animals. I’ll release it in an area between Mount Barker and Callington where there are no houses.”

I wondered how it would get on with the snakes whose territory it was going to be released into and I meowed a question about that to the snake catcher, but he ignored me. Perhaps he couldn’t understand Cat.

The Murderer and the Black Death