Home » Lorelei James » All Jacked Up
←Home
All jacked up, p.1 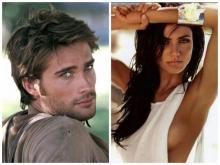 Keely McKay’s lucky cowgirl boots kicked up clouds of dust as she paced across the wooden plank floor.

A mouse skittered in front of her and she jumped like a scalded cat.

So much for maintaining nerves of steel.

Well, at least she hadn’t shrieked like a scream queen from some cheesy slasher flick.

In the last twenty-three minutes and forty-two seconds she’d chewed her bottom lip to the point she tasted blood beneath the cherry-flavored lip gloss. Not only that, her fingers hurt from continually cracking her knuckles. Frogs jumped in her stomach and were stuck in her throat. She’d clenched her jaw hard enough to make her earlobes sting. Given her erratic physical reactions, one would believe she was facing the hangman’s noose. An executioner’s blade. Or a blind date.

She was meeting a man. A man she didn’t know. A man she’d never spoken to. A man who held her entire future in his hands.

And that absolutely chapped her ass, sucked balls and blew donkey dick.

No man ever had that much power over Keely McKay. She’d made sure of it. Even with five older brothers, and a dozen older male cousins, she’d always been the queen bee. Using her stubbornness to get her way, not her feminine wiles.

Not that she was opposed to flashing her cleavage to get a leg up in this situation.

No need. You are a professional, qualified woman. Not a Nervous Nellie. Not a Wild Child. Buck up.

Chin up. This is your time to shine.

There were a hundred reasons why good fortune should finally smile on her. She’d done everything right on the business front: secured the funding and found the building to further the cause she believed in.

On the personal side: she was a loving daughter, a dedicated sister, a loyal friend, an involved aunt. A proud member of the Wyoming community she’d grown up in and hoped to grow old in. She took pride in her ability to connect with people from all walks of life. She derived great joy from helping people. Heck, she’d chosen her career because she was good at those things.

She wasn’t looking for kudos or glory, just a place where she could do what she loved, help people heal close to home—close to their families.

Now that her dream of giving back to the community—filling a need for rural healthcare—was within her grasp, would this mysterious man help smooth a path to success? Or would he trip her up?

Maybe all this worry was for nothing. Maybe she’d get lucky. God knew if the decision were based on hard work, dedication, knowledge and drive, she’d be golden.

Restless, she wandered through the main floor of the century-old building, originally Moorcroft’s first general store. During the course of its existence, it’d housed the post office and an attorney’s office. For the last thirty years it’d sat empty.

She’d always wondered why no one had renovated the stalwart stone building—an answer she was now learning firsthand. New construction of steel frame structures was easier, cheaper, faster and more efficient. Hence, many historic buildings were lost to the blade of a bulldozer or tumbled by a wrecking ball. A sad situation for a western state with precious few architectural treasures in the first place.

So the State of Wyoming had wisened up and toughened regulations, forming the Wyoming Historical Western Preservation Committee to deal with the lax construction policies and administration of fines. The committee also gauged a structure’s historical merit, determining those to be listed on the official register, as well as overseeing any structural and architectural changes of registered buildings, both on the state level and with recommendation to the National Historic Register.

Talk about a taste of bureaucracy.

After dealing with committees and subcommittees, and tracking down funding sources, Keely discovered the entire house of cards depended upon whether she could convince the certified architectural restoration specialist to oversee the project. The company representative insisted on making a personal appearance to gauge the validity of the proposed project before rendering a decision.

As if the situation wasn’t convoluted enough, she’d inadvertently discovered the restoration company she’d contacted and the company that owned the Sandstone Building she lived in…were one in the same.

If she believed in fate, she’d take that as a good sign.

The door creaked and a shaft of sunlight seared her retinas. Keely blocked the bright ray with her hand, willing her heart to stop racing as fast as a spooked antelope. This was it. Her future. Her destiny.

Please. Just this one time. Let things go my way.

She plastered on a charming smile.

As the form sauntered closer, Keely blinked several times. No way. Had to be a trick of the light. Or a trick of the swirling dust motes. Her eyes—shit, maybe she needed glasses. The male figure with a laconic walk looked like…nah. It couldn’t be him.

Or maybe she had stumbled onto the set of a low budget horror movie.

The man was a stunning example of masculine flawlessness.

And the dead last man in the world Keely ever wanted to deal with.

The older brother of the guy who’d dumped her.

The jerk who’d left her high and dry at her brother’s wedding reception three years ago.

That bitch fate had a nasty sense of humor.

Jack Donohue believed he’d adequately prepared himself for meeting Keely McKay. Boning up on his sarcasm. Practicing his disdain. Confident those reactions would prevent his instantaneous red-hot jolt of desire.

It didn’t work. The damn woman had gotten under his skin like a burr. Or tick. Or a fever. Or blood poisoning.

His gaze zoomed over her pointy-toed boots, skintight denim, gaudy rhinestone belt, plaid, pearl-buttoned shirt and stopped on her arms defiantly folded across her chest.

Definitely not his type.

A square, yet decidedly feminine jaw shadowed her willowy neck. Her upper lip was a perfect cupid’s bow. Her lower lip was plump in the center and drooped outward slightly, which contrasted with the upturned corners of her wide mouth, creating a permanent smirk. Jack remembered how sweet and hot her smirking mouth felt moving beneath his.

Her pert, freckled nose wrinkled. Those sapphire blue eyes blazed and his groin tightened in response.

Jesus. What kind of sick fuck got off on a woman glaring at him?

You. When the woman in question has starred in your X-rated fantasies for the last eleven years.

No doubt his intense scrutiny would raise her ire. Chances were slim the hotheaded cowgirl had mastered the art of curbing her tongue.

“You’ve got to be kidding me. You are Full Circle Consulting? And Western Property Management?”

He tried—and failed—not to look smug. “Afraid so. ”

“Not only are you my expert consultant, you’re my landlord?”

“Surprised? Try shocked. Dismayed. Completely and utterly crushed. Talk about unreal. Could my life get any worse at this moment?” She held up her hand. “No. Please. Don’t answer that. I cannot believe I pinned all my hopes on this…” Her voice broke and she turned away.

He waited, but Keely didn’t toss out a barbed parting shot. She didn’t do anything at all.

Damn. Why was he
disappointed? He hadn’t prepared for her immediate admission of defeat. He’d anticipated verbal sparring. Sad that he’d actually looked forward to going head to head with Keely. Her insults were lightning fast and usually funny as hell—even if he refused to admit that to her. “Look, surprise factor aside, can I ask you something?”

Keely offered him a bad-tempered shrug.

“Did Carter send you to me for help with this project?”

“Because it’s my deal, okay? I didn’t want interference from my brothers. Ditto for my parents, my aunts, my uncles and two billion cousins. ”

“Doesn’t the McKay family handbook clearly state you all have to tell each other everything?”

His attempt at humor fell short when Keely flicked him a dour look. “Go ahead and call Carter. Laugh with him about his clueless little sister. I should be used to it by now. ”

Her retreat into silence disturbed him. He waited for her to speak or to lash out or something.

But minutes ticked by and nothing passed through her compressed lips but angry puffs of air.

Keely sagged against the wall. “Buying this crappy old building was the first step of turning my dream into reality. ”

She studied him to gauge his sincerity. Apparently she found something that allowed her to offer an explanation. “My dream has been to open a physical therapy clinic with enough space to eventually expand into a full-service healthcare center. ”

Jack was taken aback. And a little impressed. “Really?”

She nodded. “Rural healthcare sucks, especially out here where it can be a hundred miles between towns of any size. For the last four years, I’ve worked my ass off saving money to open my own rehab clinic. Dr. Monroe has referred her repetitive injury patients to me and she promised if I got the place up and running, she’d open a satellite office here. So, I’ve been moonlighting at the VA in Cheyenne for the cash and the practical experience. At some point, I realized this building was ideal. Not too big. Not too small. Centrally located. Perfect, right? Still, I knew my brothers would try to talk me out of buying it because it needs so much work, but there’s just something about this forgotten place that speaks to me.

That’s why I didn’t tell them. They wouldn’t get it. ”