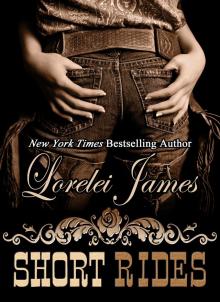 It was one of the worst scenes Deputy Cam McKay had dealt with. And he’d seen a lot of horrific things over the years. He’d served several rotations in Iraq and witnessed the aftermath of suicide bombers. He’d seen animals used as vessels to hold bombs. He’d been in a caravan that’d hit a string of IEDs, resulting in death and dismemberment of his fellow soldiers. He hadn’t come away from war unscathed—he’d lost most of his left leg, part of his hand, and bore scars, both visible and invisible.

During his time as deputy in Crook County, he’d dealt with deadly car accidents, including a fatality involving his cousin, Luke McKay. He’d broken up domestic disputes where one or both of the parties were drunk, armed, angry, and bleeding. He’d stumbled across a wild horse slaughter.

But this? It was beyond sickening.

The hysterical 911 call from the neighbor who’d discovered the bodies hadn’t prepared him at all for what he’d found at the crime scene.

His stomach roiled as his brain flashed back to the carnage and he fought the urge to throw up.

But Cam hadn’t been alone in his reaction. Sheriff Shortbull had stumbled outside and heaved over the juniper hedge after his glimpse at the dead couple.

Maybe it seemed worse because Cam knew the couple. He’d graduated from high school with Jeff Wingate. Cam couldn’t fathom how the mild-mannered insurance salesman could carry out such brutality, especially to his wife. And Angela hadn’t fought back. She’d literally lay down and died.

What a fucking waste.

What a fucking mess.

There’d been no indication of domestic issues. No 911 phone calls in the last year. No history of violence. He’d seen them eating in Dewey’s Delish Dish two weeks ago. They’d acted… happy.

Because the crime scene was beyond their small county’s investigative expertise, they’d had to call in the DCI from Cheyenne. Which meant waiting for the crew to arrive. But neither Cam nor Sheriff Shortbull could stomach waiting inside the house where the bloodbath had occurred.

So they stood outside in the frigid February weather, taking turns warming up in their patrol cars. He and the sheriff were too disturbed to slide into their usual defense mechanism, cracking jokes—which was how most law enforcement officers handled unpleasant aspects of the job—trying to find any bit of humor to escape the horror of the gruesome scene.

About two hours into the wait for the experts to arrive, a Ford Explorer inched up the driveway and parked.

Cam intercepted Angela’s parents, Jim and Teresa Swensen, after they’d exited their car; the sheriff blocked access to the house.

Jim tried to sidestep Cam, while Angela’s mother cowered behind her husband like a broken shadow. Cam braced himself, trying to imagine how he’d feel if it were one of his kids behind that door. But he couldn’t fathom that level of grief. Couldn’t imagine facing that horror.

Jim asked, “Is it true? What Becca saw inside the house?”

Damn gossipmonger. “What did she tell you?” Cam asked evenly.

“Becca said she saw them both. Dead. ” His wild eyes turned accusatory. “Did the sheriff’s office intend to notify us?”

“Not until we’d dealt with some of the preliminary issues. ”

Cam hadn’t expected this grisly situation would be kept under wraps for long, not in a town this size, especially since both Angela and Jeff and their families were well liked within the community.

“Our Angela. She’s really in there,” Jim half-whispered.

The image of her bullet-riddled body jumped into Cam’s head, unbidden. “You can’t. It’s a crime scene. ” And no parent should ever witness such an atrocity done to their child.

Jim’s eyes hardened. “Did he attack her? Did she fight back?”

“We’re waiting for the DCI folks to arrive and help us sort out what happened. ”

“How long before they get here?”

“No idea. It’s why we didn’t contact anyone. So why don’t you and Teresa head home and we’ll be in touch as soon as we know anything,” Cam said gently. “There’s nothing you can do here. ”

Jim shook his head and made a break for it.

Cam swore and started to give chase, but Teresa grabbed the back of his coat, holding him in place. Cam’s prosthesis was dicey on an uneven crust of snow—one icy misstep and it could pop off completely. And at six foot five, he could do some damage to tiny Teresa if he tried to knock her down.

Sheriff Shortbull had been watching the events unfold and he’d intercepted Jim before the grief-stricken father ducked around the back of the house.

But he hadn’t kept Jim from seeing the bloody footprints in the snow that led from the back door to the detached garage and then back inside.

Jim fell to his knees, releasing an agonized wail that ripped Cam’s soul. Teresa immediately let go of Cam. He turned, expecting to see her racing toward her anguished husband, but she was making a beeline for the unmanned front door of her daughter’s house.

Cam snagged her arm, stopping her, and managed to duck when she took a swing at him.

“Trust me when I tell you that you don’t want to see her like that. Please. Mrs. Swensen. Listen to me. Don’t try to go in there again. It’s for the best. ”

Teresa crumpled to the ground and wept.

He couldn’t do a damn thing but stand beside her and listen while she sobbed inconsolably. Wishing he were anyplace else but here, watching a family’s life forever changed.

And just when Cam thought it couldn’t get any worse, another car barreled up the driveway.

Both Jim and Teresa turned to look with hope on their faces. Almost as if they expected this death thing had been a horrible mix-up, and Angela would be climbing out of the car.

Then snow flew as Jim and Teresa raced toward the Lincoln.

Jesus. Now they’d have try to preserve the crime scene and prevent four grieving parents from ripping each other apart.

After Cam called in an immediate request for assistance, he hustled over to help the sheriff, who was dodging blows from Jim Swensen as he tried to stop Jim from attacking Bob Wingate.

Screaming and obscenities echoed to Cam’s left as Teresa rained down her frustration on Sharon. She punctuated each harsh word with a hard shove, until Sharon lost her footing on the ice and fell on her butt. Then Teresa pounced on her.

Before Cam could separate the hair-pulling pair, Sharon flipped Teresa on her back and pummeled her in the face, knocking her out cold.

Heartsick for these families, but forced to do his job, Cam gently pried Sharon away from Teresa. Then he corralled Bob as the sheriff slapped a pair of handcuffs on Jim. Cam had no choice but to handcuff Bob, too.

No matter how hard he tried, he couldn’t tune out the venom Bob spewed at him. At the sheriff. At Jim. When Jim shrieked back, sounding more like a wounded animal than a man, Cam wished he had gags. And earplugs. And a different goddamn job. <
br />
Sheriff Shortbull shoved Jim into the back of his patrol car and Cam put Bob in his car. Then they went to deal with the mothers.

Teresa had come around. She blinked, as if waking up from a bad dream. When she saw Sharon, Teresa ignored the blood dripping down the front of her coat and charged her.

Cam and the sheriff ended up cuffing both women and placing them in the cars with their respective husbands.

Before Cam closed the door, Bob’s accusation rang out loud and clear. “Why didn’t you help him?”

“My boy. Jeff. He came back from war… broken. Not on the outside like you. ” Bob’s pain-filled eyes dropped to Cam’s left leg. “But on the inside. That’s worse. You knew him. You should’ve tried… You should’ve reached out to him. ”

Cam had no response for that. He just quietly shut the door.

Thirty minutes later, Angela’s sister showed up and whisked her parents away, promising to keep them under lock and key. Immediately following their departure, Jeff’s brother, Cliff, appeared to take custody of Bob and Sharon.

Deputy Rick parked at the end of the road, keeping other curious onlookers at bay. Finally, at two o’clock, the DCI vans arrived.

The sheriff walked the techs through the scene and left the house as quickly as possible.

Neither he nor Cam said anything in the four hours the DCI took to catalogue the scene, bag the victims and tag the evidence.

As near as the DCI experts could figure, the bodies had expired within an hour of each other. No sign that anyone else had been in the house with them. It looked as if Jeff Wingate had pulled out his . 22 and emptied all fifteen clips into Angela, right in their bedroom.

Then Jeff had walked through her blood, leaving bloody footprints from the bedroom to the garage, and picked up the—

Cam and Sheriff Shortbull faced the crime scene tech, a petite blonde, early twenties, with a waxy complexion and haunted eyes. She reminded Cam of his daughter Liesl. He couldn’t imagine his sweet daughter seeing something this horrific. Would the young lady speak to her parents about the atrocities she saw in her job?

Who do you speak to about the atrocities you’ve seen?

“Do you need anything else from us?” the sheriff asked.

“No. My boss will be out to wrap up. I just…” She glanced back at the house and shivered. “I’ve never seen anything like that. ”