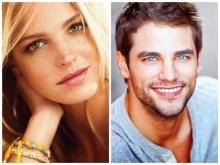 “Do you, Dalton Patrick McKay, take Addie Maureen Voorhees to be your lawfully wedded wife? To have and to hold, for better or for worse, for richer, for poorer, in sickness and in health, to love and to cherish, from this day forward, until death do you part?”

This was it. The minister’s final words would pronounce them husband and wife and he would be tied to this woman permanently.

Sweat beaded on his brow, dampening the collar of the white tuxedo shirt choking him like a noose.

The flutter beneath his breastbone wasn’t from nerves, but the gut instinct that’d never failed to warn him to cut his losses in playing cards.

The stakes were much, much higher now.

When that debilitating panic set in, his brain split into two warring camps. One side screamed at him to just say I do and be done with it. The other side, the side breaking out in hives at the very idea of forever, yelled at him to flee.

Run the fuck away.

He had been gazing at Addie’s face, but at some point…his unfocused gaze had landed on the Bible digging into his forearm like a painful burr.

Dalton heard the whisper of fabric as members of the wedding party shifted nervously. The cloying scent of lilies caused his throat to swell, cutting off his air supply. The sunlight shining through the church’s stained glass window threw fragmented strobe-light effects across the far wall.

And Addie’s soft hand remained in his, awaiting the placement of the wedding band.

Was he having a crazy booze dream after a night spent drinking too many Irish car bombs?

Or was he really standing before a minister, in front of a church packed with his and her family members, about to pledge his life and eternal love to Addie Voorhees? The town sweetheart whom everybody loved?

Dalton tried to track the source of that phantom voice. He lifted his head and looked across the altar.

In that moment he knew; he fucking knew he couldn’t do this. This was all wrong. This marriage wasn’t meant to be.

Please God, forgive me, for what I’m about to do.

His brother Tell cleared his throat behind him.

Addie squeezed his hand and whispered, “Dalton? Here’s where you’re supposed to say I do. ”

He finally met Addie’s eyes. Loving brown eyes that would soon lose the look of adoration and fill with disbelief or hatred. Or both.

Dalton released her hand and whispered, “I can’t. ”

Dalton gave in to his flight instinct, shouldering his brothers aside as he left the altar and slipped out the side door of the church.

Dalton cracked one eyelid and cast a bleary eye at the alarm clock. Seven a. m. He yanked the quilt over his head and mumbled “fuck off” to Boden Hicks, the idiot beating on his door.

“McKay. I’m not fucking around. This is an emergency. ”

That hauled Dalton’s ass out of bed. He unlatched the old-fashioned bolt and opened the door. “What’s the emergency?”

Boden hustled inside but a gust of snow followed before he slammed the heavy oak door shut. He stamped his feet. “Damn snowstorm came from out of nowhere. ”

“You better not have tricked me out of bed to complain about the goddamned weather. ”

Boden shuffled over to the woodstove to warm himself, but it’d been a good ten hours since Dalton had loaded it up. “It’s like a damn freezer in here. ”

“That’s because I was sleeping. In my own bed, after roughing it on an elk hunt, remember?”

“Yeah, I remember. I’m just glad the hunting party made it out before this storm hit. ” Boden unzipped his parka and pulled out Dalton’s cell phone, still attached to the wall charger. “Normally I could give a crap if you stay in bed a week after a hunt, but you left your phone charging at the lodge last night. The thing’s been buzzing like crazy. When I unplugged it, I noticed you’ve got twenty-seven missed calls. So it’s gotta be something important. ”

Dalton’s stomach knotted. Since he had little to no cell service in the mountains, he forgot he even had a cell phone most of the time. Few people had his number—just his brothers, his mother, his cousin Sierra McKay, his accountant, his banker and his investment guys.

“Gimme that. ” Dalton scrolled through the missed calls. Twelve from Brandt, twelve from Tell, three from Sierra.

Had to be bad news if his family had reached out to him.

The family he hadn’t seen in three years.

He glanced up at Boden. “No clue. I haven’t bothered to set up my voice mail on this phone so I’ll have to call to find out. ”

Boden sighed. “Speaking of…I wanted to make sure your two-way is charged. Since you have an issue with technology that allows people to get in touch with you. ”

“It’s charged. I laid in a store of food before the huntin’ trip so I can ride out the storm. ”

“Good. We’re supposed to get a foot of snow today and maybe more tonight. ” Boden crouched in front of the woodstove and chucked kindling in the cold embers before setting the torch to the pile. “Might be a couple days before you can get out, if you need to go home. ”

Home. It didn’t have the same connotation it once did. When it was all he’d known. “I’ll let you know what’s goin’ on as soon as I know. ”

Boden piled several small logs in the black box before he stood. “You worried?”

But Boden didn’t buy his act; he never had, which was why they’d become such good friends. “You want me to stick around?”

“Nah. I’ll put on a pot of coffee before I call my brother. ” He smirked. “Get on back to the lodge. Bree would jam my nuts in a vise if you got snowed in with me instead of with her. ”

“Your nuts ain’t ever gonna be anywhere near my wife’s hands, McKay. ”

He laughed. “I know your kink doesn’t extend to sharing. ”

“Damn straight. ” Boden zipped up his parka and slipped on his gloves. “You need anything, buzz us. If we don’t answer right away—”

As soon as Boden left, Dalton started coffee. Then he stripped off his long johns and took a cold shower. That ensured he’d be fully awake.

The main room of the three-room cabin had warmed up by the time he’d dressed. After downing two cups of coffee, Dalton stood by the window in the kitchen and called Brandt.

His oldest brother answered on the fourth ring. “’Bout damn time, Dalton. Where the hell have you been that you can’t return a phone call?”

No doubt Brandt thought he was fucking off someplace. Little did he know how tiring it was leading a ten-day hunting party into the mountains. But Dalton no longer explained his life choices to anyone. “What’s goin’ on? I had
twenty-four missed calls in the last twelve hours. ” No one knew Sierra had his number. His brothers would be pissed if they knew Dalton kept in better contact with Sierra than with them.

“He’s alive, if that’s what you mean. He’s havin’ difficulties talkin’. They’re not sure if it’s permanent. They’re not too sure of anything at this point. So we—me’n Tell—are asking you to come home. ”

Dalton closed his eyes. He didn’t want to play nursemaid to the man who’d made his life hell. Especially not after the last conversation they’d had, which was the biggest reason Dalton had left Sundance for good—not that he’d told his brothers or anyone else about what’d gone down. “I don’t know if I can. ”

“Why do you want me there?”

“Hey, bro. Brandt put you on speaker phone,” Tell said. “Look, we need you to help us make some decisions about Dad’s care. ”

Dalton let his forehead rest against the frosted windowpane.

“We haven’t seen you in over three years. It sucks that something like this had to happen for you to even consider comin’ home. But we do need you here. ”

He pictured his brothers, Tell leaning against the window in the cab of Brandt’s truck, his restless fingers tapping on his leg. Brandt seated behind the steering wheel, his posture stiff, arms crossed over his chest.

“When did this happen?” Dalton asked.

“Brandt got a call from the hospital in Spearfish yesterday morning. They wouldn’t let us see him until late afternoon. Soon as we had some information, we tried calling you. ” Tell paused. “You ain’t gotten any better at returning calls. ”

“But I did return it. Not fast enough for you?” he asked sharply. Jesus. Within two minutes of talking to his brothers he’d reverted to the defensive guy he’d left behind. He exhaled slowly. “Sorry. Cell service here is spotty. ”

Don’t feel guilty they don’t know. “Alder, Montana. We’re in the midst of a blizzard so it might be a couple days before I can make it out of the mountains. ”