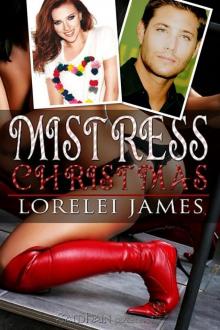 “I look like an X-rated Mrs. Claus!” Holly North did a double take at her brazen image in the full-length mirror.

“I don’t think Santa would approve. ”

“Au contraire. I have it on good authority Santa loves naughty girls way more than nice girls. You should see what they get for Christmas. ”

“I can’t wear this. My ni**les are practically showing. ” Holly yanked up the red leather bustier.

Ivy jerked the bustier back down. “Leave it. Customers want to believe they’re getting a free peep show. ”

Holly gaped at her friend, Ivy Lane, owner of Sugar Plums, a “gentleman’s” club—aka a high-class strip joint. She gestured to the skintight leather pants, the shelf-like bustier that displayed her boobs like Christmas ornaments, and the four-inch poinsettia-red stilettos. “No man out there is going to buy that I’m the infamous Mistress Christmas, regardless if I’m wearing the costume. ”

“It’s all in the attitude, sweetums. ” Ivy frowned and tugged the black leather pants to Holly’s hipbones. “Actually it’s in the hips. Swivel ’em, baby. ”

“Great. ” Holly stared at the exposed section of her stomach where the bustier and the pants gapped. She turned sideways. Truthfully, she didn’t look half-bad. Pilates three times a week kept her belly from jiggling like a bowl full of jelly.

Still…as she stared at the smoky-eyed, half-naked stranger in the mirror, she wondered if she should’ve skipped that last glass of mulled wine. How could she even consider parading in public dressed this way?

“Just cop an attitude. Rule number one: sell yourself,” Ivy intoned. “Stop acting like an accountant. ”

“But I am an accountant. ” Ivy was her best pal—and top client. When Holly had impulsively stopped by to drop off quarterly tax forms, Ivy had pleaded with Holly to cover Mistress Christmas’s shift. Not only was the real Mistress sick, half of the bartenders and bouncers were out sick too.

Since Sugar Plums was a Christmas-themed strip joint, the club was especially swamped during the holidays. And since Holly was a sucker, she had a hard time saying the word no to her desperate friend.

But a teeny part of her was excited to break out of the boring mold and act bold and daring.

“You are a damn good accountant, Holls. However, you are also one gorgeous woman. ” Ivy slathered on the flattery as thick as Tom and Jerry batter. “You shouldn’t hide this hot, curvy body under tweed, wool and prim looks. Shake it. Flaunt it. I guarantee my customers are gonna eat you up. ”

“Trust me, I barely recognize you. ” Ivy sighed. “Anyway, you don’t have to strip. And it’s not like I expect you to do lap dances. We’ll announce you, you’ll walk across the stage and then you’ll mingle with the customers. ”

“That’s all?” she asked skeptically.

“Yep. You can come back to the dressing rooms and chill between Divinity’s and Candy Cane’s sets, if you want. ” Ivy rummaged through a cardboard box of props, muttering to herself.

“Aha!” She waved a red velvet mask at Holly. “Put this on. It’ll give you an air of mystery and a measure of privacy. ”

“Fine. ” Holly slid the mask over her face, careful not to smear the artfully applied makeup or jostle the tinsel threaded through her hair. The minute that sinfully soft velvet caressed her skin, Holly’s modesty miraculously vanished.

Oh yeah. This could be fun. Freeing.

Getting in the holiday spirit, Holly smiled coyly at Ivy in the mirror. “Hand me the red lipstick. Do you think I should dust snowy glitter across my cleavage? Or would that be too much?”

Detective Nick West sipped his Artic Ale and scrutinized the interior of Sugar Plums. Classy joint. Dark, but clean. The place could use a few more bouncers—security was a bit lax in his opinion.

The sound system pulsed and the strobe lights flashed in time to music heavy on the bass line. Although the stage was empty, the place was packed with single men, outrageously priced drinks in hand, their hungry gazes glued to the trio of brass stripper poles center stage as a disco ball spun, casting a kaleidoscope of color across the white walls.

To the left was a screened-off area that Nick assumed was for lap dances—not that he knew about those firsthand. Strip clubs had never been his thing, even in his younger years when he was raising hell in Wyoming with his notoriously wild McKay cousins. And luckily, early on in his career, Adult-oriented businesses or AOBs—weren’t on his patrol assignments.

To the right was another small but open room, which housed the video lottery machines. Several overweight guys sat in front of the glowing blue screens, in a daze, poking buttons and feeding money into the greedy bill slots like junkies.

What a waste. A spark of anger reminded him why he was here. Last week his friend Rudy Donner had spent an evening at Sugar Plums. During a lap dance, the stripper known as Mistress Christmas had drugged his drink and lifted fifteen hundred bucks from his wallet. Rudy didn’t remember much besides waking up in his car, cold, hungover and dead broke. Poor Rudy had been too embarrassed to press charges.

So Nick decided he’d check the place out on his own time, off the clock. He’d get up close and personal with the mysterious Mistress Christmas. If she pulled the same shit on him, well, he’d slap a pair of cuffs on her faster than she could say, “Merry Christmas, Officer. ” And his cuffs weren’t the velvet-lined novelty type she was probably used to.

The music ended abruptly. An air of expectation filled the room and all eyes focused on the door on the stage.

A throaty female voice boomed over the stereo system. “Let’s get this party started! First up tonight, for your pleasure, we have the talents of Divinity, followed by Velvet and lastly, the ever-popular Candy Cane. To get this party going, I’d like to introduce Mistress Christmas. ”

Nick frowned and a suspicious feeling rolled through him. What kind of strip club was this that the headliner wasn’t dancing?

“Now don’t get your jocks in a knot, boys. Instead, of shaking her Christmas bon-bon, she’ll be out front mingling with all of you, sharing her special brand of holiday cheer. Let’s give Mistress Christmas a big Sugar Plums welcome!”

Wolf whistles, catcalls, and wild applause rang out as the lights dimmed. The door opened and out stepped a vision of pure sex on stilettos.

Holy shit. The woman was a goddess. Tall and built like a brick shithouse. Her leather-clad legs went on forever. Her tits weren’t the enormous jugs most strippers displayed, but rosy mounds that filled out the skintight corset to perfection. Her lips were full, lush and crimson stained. Her auburn hair, threaded with glittery tinsel, cascaded down her bare back. A mask covered half her angular face, accentuating her wide eyes and pouty mouth.

Visions of those red lips sliding up and down his cock, striping his dick like a candy cane, made his c**k stand at full attention.

Jesus. No wonder this woman had suckered Rudy. She was an absolute wet dream.

She spun, twirled and strutted, playing her part to the hilt. Acting coquettish—the type of woman who’d purr like a kitten in polite company, but roar, scratch and bite like a tigress behind closed bedroo
m doors. The type of woman Nick secretly craved.

After several long minutes of watching every man in the joint approach her, Nick drained his beer and stood. No way was any other man putting his hands on her. No. Fucking. Way.

Tonight, Mistress Christmas belonged to him.

Holly took her time sauntering across the room to the horseshoe-shaped bar, smiling, flirting, acting like she knew what the hell she was doing.

Time dragged on, and after fifteen excruciating minutes, she needed a booster shot of liquid courage. She’d barely curled her fingers around the brass bar rail when warm breath tickled the damp skin below her ear. “Buy you a drink, Mistress Christmas?”

A chill trickled down her spine upon hearing the sexy masculine drawl. Holly half-turned. Good thing she held the railing because the man crowding her was the most spectacular male specimen she’d seen since…well, since ever.

Merry Christmas to her.

He was big; at least an imposing six-foot-three, and his body appeared to have been crafted out of solid muscle. His golden hair brushed the collar of his plaid western shirt, which stretched across his shoulders nearly as broad as the bar top. Laugh lines creased the corners of his hazel eyes, as well as the corners of his captivating lips. Lips that were curved into a big ol’ shit-eating grin.

Oh mama. That lethal smile could prove to be her downfall.

“Did I pass your inspection, darlin’?”

“With flying colors. ” So much for acting cool and professional. She regrouped and smiled cheekily. “I believe you mentioned something about buying me a drink?”

You. “I’m in the mood for peppermint schnapps. ”

“A taste of sweet and sticky coming right up. ”

He scooted close enough she could differentiate the varying shades of gold, blond and brown in his wavy hair. And the scent of him was intoxicating—clean linen and hot man.

When he reached across the bar, the inside of his thick wrist grazed the bared skin below her ribcage. The electric shock of the simple contact nearly buckled her knees. A little gasp of surprise escaped before she could stop it.

His frown was there and gone as he paid the bartender and slid two shot glasses within reach.

When Holly faced him fully, his gaze focused on hers with an intensity that caused her eyelashes to tingle. As she attempted to gulp down her shot, he placed his warm, rough-skinned hand atop hers, stilling the motion.