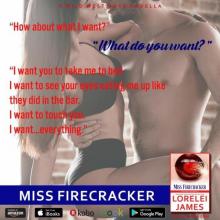 Willow Gregory woke up and realized covering her head with a pillow did not muffle the pounding inside her skull.

She shifted slightly on the damp sheets. The pillow tumbled away and a shaft of sunlight nearly fried her retinas. She squeezed her eyelids shut and muttered, “I’m in hell. ”

“A hell of your own making,” a masculine voice drawled.

Willow shrieked and jackknifed, twisting her body toward the sexy rumbling sound.

Ooh big mistake. Sharp pulses lanced her brain like pointy metal spikes. “Ow. Ow. Ow. ” She peeled her eyes open, one squinty lid at a time and saw a tempting feast of bronzed male flesh less than two feet away from her.

Holy moly. If her head weren’t inside a jackhammer she’d believe she was still in dreamland.

She studied the column of his throat, noting the golden stubble dotting his square jaw. Her eyes passed over the dent in his chin and the deep-set dimples bracketing his smirking mouth. She met his gaze. Amused hazel eyes surrounded by sooty lashes were as unforgettable as the rest of him.

Yeah? If he’s so unforgettable why don’t you know his name?

“Good mornin’ sunshine,” he said, his voice tinged with a husky twang.

Her lips parted but not a single sound came out.

His smirk became a lethal grin. “How’s the head?”

“Like it’s got an ax imbedded in it. ” Willow winced. Ow. Even talking hurt.

He shook his head and the ends of his curly blond hair brushed his collarbones. “There’s a reason they call those shots cherry bombs. ”

“Cherry bombs?” she repeated, immediately regretting the reverberation inside her brain.

“Cinnamon schnapps layered with blue Curaçao and topped with a maraschino cherry. Very patriotic. But that didn’t mean you had to drink them all, Miss Firecracker. ”

She cringed at his use of her former title. “Huh-uh. I handed over my crown, my responsibilities and my title last night. ” And good riddance.

“Your successor might’ve gotten the crown but, sunshine, you’re still wearin’ the sash. ”

Please tell me I didn’t…

Willow’s chin fell to her chest. She wore the white satin beauty pageant sash. Nothing else. She yelped, wincing at her own high-pitched squeak as she snatched up the balled sheet in an attempt to cover herself.

“It’s a little late for that, doncha think?”

She snapped, “Who are you?” when she really wanted to demand, “How the hell did I end up n**ed in your bed with the mother of all hangovers?”

“You really don’t remember?” he said with a silken purr. “All you did? All you said to me?”

“No. But if you were any good I should—”

He briefly placed his finger over her mouth. “Ah. Ah. Ah. Don’t go there. It ain’t gonna end well for you. ”

She paused. Did this fall under the “don’t ask, don’t tell” heading? She honestly had no experience with this kind of “morning after” situation.

“Did it end well for you?” she blurted. “Did we have sex last night?”

“Uh-huh. I said no. Several times. I might’ve said yes if I’d seen you strip to nothin’ but that sexy sash. ” He rubbed his meaty hand over his mouth and let his gaze drop to the aforementioned swath of fabric.

“But I prefer the woman I bed to be coherent, not babbling about spending a year toeing the line and then demanding I ‘man-up’ and do my civic duty to help you make up for lost booty time. ”

Aghast, she whispered, “I said that?”

“Yep. After the sheriff left and I got you calmed down. ”

“Not up here, but downstairs. ”

“In the bar. LeRoy’s Tavern. And it’s a good thing the sheriff knows your daddy, ’cause otherwise you woulda landed in jail. ”

A spear of pain shot from her head to the base of her spine and she lowered to the mattress to quell the dizziness. “What did I do last night?”

“What do you remember?” he asked.

“I remember crowning Miranda Sue Maffini the new Miss Firecracker. I remember having a celebratory drink or five with the losing contestants in the back of somebody’s pickup. Then we were supposed to meet up here. So I walked from the town hall…then it’s sort of blurry. ” She hesitated. “Was I with anyone else?”

“Not that I recall. You were by yourself the second you strolled in. Didn’t seem happy about it either. ”

A glimmer of memory appeared. Sitting alone in a big booth. Mortified she’d eagerly fallen for the “we’ll meet you there” line of crap. Embarrassed and feeling like a loser. Acting like it was no big deal that she’d ordered a round of expensive specialty shots for her new no-show friends.

So she drank them all herself.

The night was a blank after that, which didn’t seem like such a bad thing, given the pathetic, friendless state of her life. “I’m in the apartment upstairs from LeRoy’s Tavern?”

“Yep. ” The bed shifted as he scooted up.

Willow lifted her shoulders and studied the guy’s all-too-smug, all-too-handsome, all-too-close mug. “So if I’m at Dave’s place, where’s Dave?”

Two hundred pounds of warm male was right in her face. “My name’s Blake West. And who am I?” He swept a chunk of hair from her cheek. “Since I’m managing the bar while Dave’s fishing in Jackson Hole, that makes me your new boss. ”

He flashed her a dazzling smile. “You do for the next two nights, according to the sheriff. ”

“Might go three nights, depending on how fast you fill up your tip jar. ”

“What are you talking about?”

“I’m talking about you being a very bad girl last night, Miss—”

“I thought you’d be proud of the title, bein’s you’re still wearing the sash. ”

Willow ignored his sexy grin. “That part of my life is over and it doesn’t matter. So tell me, Blake West, how bad was I?”

“On a scale of one to ten?” He paused. His golden green eyes twinkled. Twinkled. “Fifty. ”

“The proof is right downstairs. You smashed a barstool into the wall after Norbert Fossum pissed you off. Broke the table too. You did about six hundred dollars damage. ”

“Way. And part of the reason the good sheriff didn’t toss your cute butt in jail was on the condition you work off the debt, not pay it off. ”

“Said he wants you to learn a lesson about the high price of, as you phrased it, cutting loose. ”

Shoot. Willow could imagine herself saying that. In fact, if she thought real
hard, she could almost remember shouting it to the rafters after she realized her so-called new friends had stood her up. “And if I refuse?”

“Sheriff Mayhew reinstates the charges of drunk and disorderly, the destruction of private property and you hash out the details in court. ”

She’d always admired the sheriff’s unconventional punishments to keep the peace in their town—until now.

Behind bars or tending bar…was there really a choice?

“Sunshine, you did this to yourself. ”

He had a point. “So what are you getting out of this besides free labor? My humiliation?”

“Your humiliation? What about mine?”

“Yes. You working to pay for damages means I don’t have to tell my buddy that I let some smokin’ hot beauty queen distract me to the point she wreaked havoc in his bar on my second night in charge. ”

Smokin’ hot beauty queen? Wow. Did he really mean her?

His eyes narrowed. “I recognize that scheming look from last night. ”

“I am not scheming! I don’t have a scheming bone in my body. ”

Why wouldn’t he doubt her? If everything he’d claimed she’d done last night was true? “It’s just…I can’t believe I did something so stupid. ”

“Well, prepare yourself for quite a few more because I’ve never bartended. ”

“More used to knockin’ ’em back than making them, are you?” he drawled.

Willow glared at him.

Which caused him to smile and set those damn dimples winking again. “No worries. You won’t be mixing drinks. You’ll be slinging them. ”

Blake’s gaze trailed down her body. Not a covert glance from beneath his sinfully long lashes, but blatant masculine appraisal. When he deigned to look at her face, his eyes were heated and dark. “Oh yes, indeedy, you certainly are. ” Then he shoved aside the blanket and stood.

Unlike her, he wasn’t naked. However, he looked damn fine clothed. And was there anything sexier than a hunky bare-chested man filling out a pair of hip-hugging jeans to perfection? Her head protested the exertion of imagining Blake West wearing nothing but his dimples.