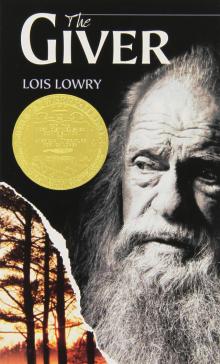 It was almost December, and Jonas was beginning to be frightened. No. Wrong word, Jonas thought. Frightened meant that deep, sickening feeling of something terrible about to happen. Frightened was the way he had felt a year ago when an unidentified aircraft had overflown the community twice. He had seen it both times. Squinting toward the sky, he had seen the sleek jet, almost a blur at its high speed, go past, and a second later heard the blast of sound that followed. Then one more time, a moment later, from the opposite direction, the same plane.

At first, he had been only fascinated. He had never seen aircraft so close, for it was against the rules for Pilots to fly over the community. Occasionally, when supplies were delivered by cargo planes to the landing field across the river, the children rode their bicycles to the riverbank and watched, intrigued, the unloading and then the takeoff directed to the west, always away from the community.

But the aircraft a year ago had been different. It was not a squat, fat-bellied cargo plane but a needle-nosed single-pilot jet. Jonas, looking around anxiously, had seen others—adults as well as children—stop what they were doing and wait, confused, for an explanation of the frightening event.

Then all of the citizens had been ordered to go into the nearest building and stay there. IMMEDIATELY, the rasping voice through the speakers had said, LEAVE YOUR BICYCLES WHERE THEY ARE.

Instantly, obediently, Jonas had dropped his bike on its side on the path behind his family's dwelling. He had run indoors and stayed there, alone. His parents were both at work, and his little sister, Lily, was at the Childcare Center where she spent her after-school hours.

Looking through the front window, he had seen no people: none of the busy afternoon crew of Street Cleaners, Landscape Workers, and Food Delivery people who usually populated the community at that time of day. He saw only the abandoned bikes here and there on their sides; an upturned wheel on one was still revolving slowly.

He had been frightened then. The sense of his own community silent, waiting, had made his stomach churn. He had trembled.

But it had been nothing. Within minutes the speakers had crackled again, and the voice, reassuring now and less urgent, had explained that a Pilot-in-Training had misread his navigational instructions and made a wrong turn. Desperately the Pilot had been trying to make his way back before his error was noticed.

NEEDLESS TO SAY, HE WILL BE RELEASED, the voice had said, followed by silence. There was an ironic tone to that final message, as if the Speaker found it amusing; and Jonas had smiled a little, though he knew what a grim statement it had been. For a contributing citizen to be released from the community was a final decision, a terrible punishment, an overwhelming statement of failure.

Even the children were scolded if they used the term lightly at play, jeering at a teammate who missed a catch or stumbled in a race. Jonas had done it once, had shouted at his best friend, "That's it, Asher! You're released!" when Asher's clumsy error had lost a match for his team. He had been taken aside for a brief and serious talk by the coach, had hung his head with guilt and embarrassment, and apologized to Asher after the game.

Now, thinking about the feeling of fear as he pedaled home along the river path, he remembered that moment of palpable, stomach-sinking terror when the aircraft had streaked above. It was not what he was feeling now with December approaching. He searched for the right word to describe his own feeling.

Jonas was careful about language. Not like his friend, Asher, who talked too fast and mixed things up, scrambling words and phrases until they were barely recognizable and often very funny.

Jonas grinned, remembering the morning that Asher had dashed into the classroom, late as usual, arriving breathlessly in the middle of the chanting of the morning anthem. When the class took their seats at the conclusion of the patriotic hymn, Asher remained standing to make his public apology as was required.

"I apologize for inconveniencing my learning community. " Asher ran through the standard apology phrase rapidly, still catching his breath. The Instructor and class waited patiently for his explanation. The students had all been grinning, because they had listened to Asher's explanations so many times before.

"I left home at the correct time but when I was riding along near the hatchery, the crew was separating some salmon. I guess I just got distraught, watching them.

"I apologize to my classmates," Asher concluded. He smoothed his rumpled tunic and sat down.

"We accept your apology, Asher. " The class recited the standard response in unison. Many of the students were biting their lips to keep from laughing.

"I accept your apology, Asher," the Instructor said. He was smiling. "And I thank you, because once again you have provided an opportunity for a lesson in language. 'Distraught' is too strong an adjective to describe salmon-viewing. " He turned and wrote "distraught" on the instructional board. Beside it he wrote "distracted. "

Jonas, nearing his home now, smiled at the recollection. Thinking, still, as he wheeled his bike into its narrow port beside the door, he realized that frightened was the wrong word to describe his feelings, now that December was almost here. It was too strong an adjective.

He had waited a long time for this special December. Now that it was almost upon him, he wasn't frightened, but he was . . . eager, he decided. He was eager for it to come. And he was excited, certainly. All of the Elevens were excited about the event that would be coming so soon.

But there was a little shudder of nervousness when he thought about it, about what might happen.

Apprehensive, Jonas decided. That's what I am.

"Who wants to be the first tonight, for feelings?" Jonas's father asked, at the conclusion of their evening meal.

It was one of the rituals, the evening telling of feelings. Sometimes Jonas and his sister, Lily, argued over turns, over who would get to go first. Their parents, of course, were part of the ritual; they, too, told their feelings each evening. But like all parents—all adults—they didn't fight and wheedle for their turn.

Nor did Jonas, tonight. His feelings were too complicated this evening. He wanted to share them, but he wasn't eager to begin the process of sifting through his own complicated emotions, even with the help that he knew his parents could give.

"You go, Lily," he said, seeing his sister, who was much younger—only a Seven—wiggling with impatience in her chair.

"I felt very angry this afternoon," Lily announced. "My Childcare group was at the play area, and we had a visiting group of Sevens, and they didn't obey the rules at all. One of them—a male; I don't know his name—kept going right to the front of the line for the slide, even though the rest of us were all waiting. I felt so angry at him. I made my hand into a fist, like this. " She held up a clenched fist and the rest of the family smiled at her small defiant gesture.

"Why do you think the visitors didn't obey the rules?" Mother asked.

"That's right," Lily said, laughing too. "Like animals. " Neither child knew what the word meant, exactly, but it was often used to describe someone uneducated or clumsy, someone who didn't fit in.

"Where were the visitors from?" Father asked.

Lily frowned, trying to remember. "Our leader told us, when he made the welcome speech, but I can't remember. I guess I wasn't paying attention. It was from another community. They had to leave very early, and they had their midday meal on the bus. "

Mother nodded. "Do you think it's possible that their rules may be different? And so they simply didn't know what your play area rules were?"

"You've visited other communities, haven't you?" Jonas asked. "My group has, often. "

Lily nodded again. "When we were Sixes, we went and shared a whole school day with a group of Sixes in their community. "

"How did you feel when you were there?"

Lily frowned. "I felt strange. Because their methods were different. They were learning usages that my group hadn't learned yet, so we felt stupid. "

Father was listening with interest. "I'm thinking, Lily," he said, "about the boy who didn't obey the rules today. Do you think it's possible that he felt strange and stupid, being in a new place with rules that he didn't know about?"

Lily pondered that. "Yes," she said, finally. "I feel a little sorry for him," Jonas said, "even though I don't even know him. I feel sorry for anyone who is in a place where he feels strange and stupid. "

"How do you feel now, Lily?" Father asked. "Still angry?"

"I guess not," Lily decided. "I guess I feel a little sorry for him. And sorry I made a fist. " She grinned.

Jonas smiled back at his sister. Lily's feelings were always straightforward, fairly simple, usually easy to resolve. He guessed that his own had been, too, when he was a Seven.

He listened politely, though not very attentively, while his father took his turn, describing a feeling of worry that he'd had that day at work: a concern about one of the newchildren who wasn't doing well. Jonas's father's title was Nurturer. He and the other Nurturers were responsible for all the physical and emotional needs of every newchild during its earliest life. It was a very important job, Jonas knew, but it wasn't one that interested him much.

"What gender is it?" Lily asked.

"Male," Father said. "He's a sweet little male with a lovely disposition. But he isn't growing as fast as he should, and he doesn't sleep soundly. We have him in the extra care section for supplementary nurturing, but the committee's beginning to talk about releasing him. "

"Oh, no," Mother murmured sympathetically. "I know how sad that must make you feel. "

Jonas and Lily both nodded sympathetically as well. Release of newchildren was always sad, because they hadn't had a chance to enjoy life within the community yet. And they hadn't done anything wrong.

There were only two occasions of release which were not punishment. Release of the elderly, which was a time of celebration for a life well and fully lived; and release of a newchild, which always brought a sense of what-could-we-have-done. This was especially troubling for the Nurturers, like Father, who felt they had failed somehow. But it happened very rarely.

"Well," Father said, "I'm going to keep trying. I may ask the committee for permission to bring him here at night, if you don't mind. You know what the night-crew Nurturers are like. I think this little guy needs something extra. "

"Of course," Mother said, and Jonas and Lily nodded. They had heard Father complain about the night crew before. It was a lesser job, night-crew nurturing, assigned to those who lacked the interest or skills or insight for the more vital jobs of the daytime hours. Most of the people on the night crew had not even been given spouses because they lacked, somehow, the essential capacity to connect to others, which was required for the creation of a family unit.

"Maybe we could even keep him," Lily suggested sweetly, trying to look innocent. The look was fake, Jonas knew; they all knew.