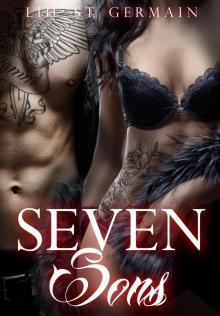 This is a work of fiction. Any resemblance it bears to reality is entirely coincidental.

Confucius said, “Before embarking upon a journey of revenge, dig two graves.”

I planned to dig seven.

Sometimes I don’t think about it for hours at a time. Sometimes, a whole day will pass, and it’ll be there, under the surface, burning my insides with the brutality of its truth. My truth.

And I’ll get home from my dead-end job in this dead-end fucking town in the asshole of Nebraska, and I’ll have almost made it through a whole day of not thinking about it, about my father and Dornan Ross and his sons.

But then I’ll do something without thinking, like undress to go to bed, or slide under the covers of my bed. And I’ll see the marks they branded on my right hip – seven horizontal lines, each stacked on top of each other, made by casting the blunt edge of a butcher’s knife into fire and then pressing it into my flesh. A line for Dornan Ross and a line for each of his six older sons. Notches on a bedpost. Scarred for a lifetime so that I can never forget. Some are thicker than others, some short and others long, but each one a devastating reminder of everything they took from me that night.

Even if I stay in my stale clothes to avoid seeing my scars, I still can’t escape them. I never sleep well. I toss and turn, fitful and drenched in sweat, awakening from nightmares where they find me and turn the knife to the sharp side. Where they don’t just brand me – they cut me until I am dead, so I won’t talk to the police. I know things, see. I know things that the police don’t, about purchased alibis and body disposal spots, about too many girls who went missing and too many men who kept too many secrets.

I used to wish every day and every night to forget about my fathers murderer and what he did to us. Not anymore. Now I want to remember every tiny detail so that I can exact my revenge.

Tomorrow is different. Tomorrow is my twenty-first birthday, the day I gain access to my secret inheritance. The several hundred thousand that my father managed to hide before Dornan framed him for the murder of a policeman and his family, a crime that Dornan and his eldest son committed as retribution for a drug bust that almost wiped the club out. It might be dirty money – my father wasn’t above money laundering and drug manufacturing – but it was his money. Dornan managed to seize control of the rest when he enacted his devastating betrayal.

Tomorrow is truly my birthday, for I will become another person. Today my name is Juliette Portland, but tomorrow I will wake up as someone else entirely.

Someone who will bring Dornan Ross and the Gypsy Brothers Motorcycle Club to their knees.

I’ve never left the country before, but I’m not worried. The night of my twenty-first birthday, I don’t party, but arrive in Thailand after a long and cramped flight from the U.S. I have lost time, and it is already morning in Bangkok. I travel directly to the hospital where I will be having my procedure – this isn’t a sightseeing holiday, after all. I’m not here for fun.

I’m here to be reborn.

The staff are efficient and discreet. I am admitted and the surgeon goes over the final computer-enhanced photographs which show what I’ll look like after.

Before the surgery, I go into the private ensuite and strip down. I have a moment of unexpected sadness as I study myself one last time. I’ve already colored my strawberry blonde hair a deep chestnut brown, but apart from that, this is how I was born. I look exactly like my mother. Tall, skinny, no boobs, green eyes. A light smattering of freckles across my nose is the only thing I got from my father, and a laser is about to burn them off forever. My nose, once regal and thin, now sits crooked, thanks to Dornan breaking it six years ago. It never healed properly, and it is the main reason I cannot stand my own appearance.

But now, standing here like this, so completely naked and alone, I shed a single tear. For my father. For the little girl I used to be, who had everything ripped away.

I shed a tear because she is about to die, six years after she cheated death.

I wipe the tear away and put on my blue hospital gown, tying it at the back. Leaving the cubicle, I enter the room where my procedures will be performed. Twelve hours is all it will take to make me into a completely new person – a new nose, new skin, porcelain veneers on my teeth, fuller cheekbones, and new boobs. I wanted them to remove the scars on my hip, but the laser regimen would take months against all that messy scar tissue. Instead, I’ll get a tattoo when I’m back in the States.

As I lay down on the operating table, a nurse hovers over me, a mask in her hand. Before she can lower it, the doctor motions for her to wait.

“Last chance,” he says to me. “Are you sure you want to go through with this?” He is an excellent surgeon, and from what I have gleaned, a kind family man. Although he is Asian, he reminds me of my father. There is a patriarchal kindness in his eyes that I haven’t seen in a long time.

“Positive,” I say, gesturing for the nurse to lower the mask.

“You’re going to look beautiful,” the surgeon says, and a few moments later, everything goes black.