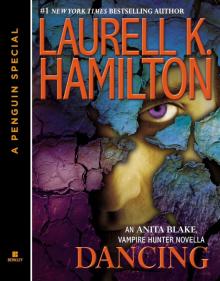 Sergeant Zerbrowski of the Regional Preternatural Investigation Team, RPIT, and his lovely wife Katie held an annual barbecue at their house for all the cops who could come. They timed it for when the worst of the summer heat was past, but it was still shorts and tank top weather. This year was unseasonably cool, so late August was the date. It was the earliest they’d ever been able to do it. The cookout was family friendly, so light drinking at best, and if you wanted to get drunk, Katie Zerbrowski would hand you your head in a verbal basket before she kicked your ass out the door. Since she was a few inches smaller than my own five foot three, and more delicate looking; it was always fun to see her take on a big, tough, drunk cop and win, but I’d stopped going a few years back. Far too many small children, not my favorite thing, and too much family stuff. When I’d been the only single female at the thing the wives had either tried to fix me up, or the single guys had tried to hit on me, or . . . my social skills hadn’t been up to it, but that had been before Micah Callahan and Nathaniel Graison.

They’d been to dinner at the Zerbrowskis’ house before, both to a cop cookout and a dinner party, but those had been much smaller events. Katie and Zerbrowski had handpicked the guest list for people who would deal better with the fact that I came with two men, and would have married both if it had been legal.

I hadn’t intended to brave the big event. I wasn’t a fan of crowds, and I didn’t want to have to alienate cops I’d have to work with later by defending my lifestyle to them, but Nathaniel was Facebook friends with Katie, and she’d been mentioning how much work it was finishing up her second master’s degree along with planning for the big party, so my wonderful domestic boyfriend had offered to help, and just like that we were committed.

Nathaniel had been cooking for days, mostly sides like potato salad, macaroni salad, and coleslaw, which he’d all managed to make with less mayonnaise, or lite mayonnaise, or something that made it healthier but still yummy. He’d also baked a frosted layer cake and a batch of homemade rolls. If it had been left to Micah and me, it would have all been store-bought, and much less healthy, though eyeing the chocolate layer cake, I was wondering what he’d done to it to make it “healthier. ” I was really hoping nothing. I liked chocolate cake.

I wasn’t the only one. Matthew, who was four, asked from his child safety seat in the back, “When can we have cake?”

“After meat and veggies,” Nathaniel said automatically from the backseat. We’d been babysitting Matthew a lot in the last two years.

I was driving, so I could only glance back at Matthew and Nathaniel. He was holding the cake in his lap, because iced cakes and cars are always chancy. This was the first time that any of the other cops’ wives had really treated Nathaniel like another wife, and he was a little nervous about it. It was cute, and so was he. Okay, he was gorgeous, his face model-handsome where it showed around the sunglasses. They hid the lavender eyes, not blue, but the color of spring lilacs. The blue tank top he was wearing would make his eyes lean closer to blue, but they weren’t. I’d never met anyone else with lavender eyes, but they were just the cherry on the too-pretty-to-be-mine cupcake that was Nathaniel, because the tank top also showed off the muscles in his shoulders and arms, a hint of chest. The shirt was a little loose as it fell around his upper body, because a tank that clung to his body would just be unfair to the other men at the party.

He had his ankle-length auburn hair back in a braid, but I realized that his hair was only a little more red auburn than Matthew’s browner auburn. How had I never noticed it before? Maybe it was that Matthew’s curls had finally grown long enough to trail over the collar of his blue T-shirt, because he’d persuaded his mother, Monica Vespucci, to let him grow his hair out like Uncle Nathaniel and Uncle Jean-Claude and Uncle Micah. Monica was away on a weeklong business conference. She was a successful lawyer, and the widow of one of Jean-Claude’s employees, Robert, who had been a vampire companion of his for over a hundred years. It made him feel responsible for the family. Monica had no family in town, so he felt we should step in to help her with Matthew. It was a noble thought, but since Jean-Claude was the head of the American Vampire Council, he was usually dead to the world when Matthew had to be picked up from preschool, or taken to dance class, he was unable to be on twenty-four-hour availability when Monica had a deposition out of state or a business conference. Since Monica’s deceased husband had been a vampire, too, it made me realize she’d have been almost in the same boat if he’d lived. Funny, the things you don’t think of when you date vampires.

Micah was beside me in the passenger seat. He’d chosen a green T-shirt that did cling, but he didn’t muscle up the way Nathaniel did, and he was five foot three to Nathaniel’s five foot nine, so a baggy T-shirt would have made him look even smaller and more delicate. His face was a soft triangle with only a little extra length through the jawline that made him look male and not like a beautiful, dainty woman. With the tighter shirt you could see the leanness of his body, the fine muscles that he got through running, lifting weights, and fighting practice. My muscles came from the same things, except I did weapons drills more than he did, but the regimen had put muscle on my delicate girl frame, too. I actually bulked up easier than he did, but I bulked up for a girl, so that between him not bulking much and me bulking more than most women, we could trade T-shirts, and some of our jeans. Though today he was in jean shorts that wouldn’t have been comfy over the curve of my thighs. Nathaniel and I were both in jogging shorts, because they fit over the more generous thighs we both had. Lush was a word you’d use for both of us, where Micah was lean. I’d never dated anyone before who was small enough to share my clothes. I kind of liked it.

We both had long curly hair to just past our shoulder blades, his dark chestnut brown that had been blond when he was a child, mine true black and always had been. Nathaniel had braided Micah’s hair, and braided the upper level of mine, so we’d be a little cooler in the heat. It wasn’t the usual August hot, but it still wasn’t as cool as most of the country. We were both wearing sunglasses against the St. Louis summer sun, but my eyes were just a nice solid brown like Matthew’s, except a little darker. Micah’s eyes were green around the pupil with a circle of yellow outside of it; depending on the light, his moods, his shirt color, they could look more yellow, or more green, but they were chartreuse, a mix of both colors, and not human. He was a wereleopard, and his eyes were the leopard eyes of his beast form, because a very bad man had forced him into leopard form for so long that when he came back to human, his eyes didn’t change back. He wore sunglasses most of the time, knowing how unusual his eyes looked, but surprisingly few people realized what they were looking at. They’d just say, “Pretty green eyes. ” People see what they expect to see.

Cops don’t, but then everyone at the party knew that my two boyfriends were wereleopards. They even knew that Micah was head of the Coalition for Better Understanding Between Human and Lycanthrope communities. He’d become the public face for his minority group. Lycanthropy was a disease, but less than twenty years ago it had still been legal to kill someone on sight for having it. In some western states, even today, if you killed a wereanimal and the blood test proved it, it was deemed self-defense regardless of circumstances.

I was in the actual neighborhood where Zerbrowski lived now, driving past the three different styles of house in the development over and over, just different colors, different accessories, but it was an American suburb, which meant the houses were all vaguely alike. The Zerbrowski house was the one-story ranch style. Theirs had brick siding and a neatly trimmed lawn that was green enough to show they watered it. The shrubs were neat and trimmed low near the foundation with a small flower bed on either side of the sidewalk that led to the front door. The flowe
rs were a brilliant splash of yellow, white, and red.

The driveway was full, but there was only one car out in front, and I pulled in behind it. Last time I’d been here the entire street had been full of cars; this time we’d arrived early so that Nathaniel could help the other “wives” with the kitchen stuff. Meat would be grilled outside by Mr. Zerbrowski and any other men he let near his grill. The arrangement was all very traditional, but then most cops like traditional roles. Their jobs can be full of such weird shit I think it makes them cling to the normal stuff. I was a U. S. Marshal for the preternatural branch of the service, which meant I was only involved in crimes that had some preternatural element. When I wasn’t serving an active warrant for the Marshal service, my night job was raising zombies for Animators Incorporated. I’d been doing a lot of historical society jobs lately—you know, raise the dead and just ask them what happened at such and such battle on this date.

All my jobs were weird shit, so I should have been more conservative than the rest of the police, and once I had been, but that had been before Jean-Claude, master vampire of St. Louis, found me, before I’d started considering vampires friends and lovers instead of just evil walking corpses. Now here I was, showing up with two live-in lovers and a child, all without the benefit of a wedding band. Matthew was with us for a week; it was the longest he’d ever stayed with us and he was taking it as normal. One of the reasons we’d brought Matthew rather than leaving him home with one of his other “uncles” was because Nathaniel realized there’d be other kids. Nathaniel had pointed out that Matthew was pretty isolated from other children once he left preschool. Monica was a busy single parent, she didn’t have a lot of time to arrange playdates for him, so we brought Matthew so he could make friends. I knew there’d be some kids around his age, and lots of older and younger ones. It might be the most children Matthew had ever been around except at a dance recital. The thought was a little overwhelming for me, but a good one for the kid.

Once the car was stopped I undid my seat belt. That was the signal for everyone else to undo theirs. Matthew could undo his own child safety seat, which is what we called it, since he’d objected to “baby seat” as a term.

Dancing by Laurell K. Hamilton / Fantasy / Romance & Love have rating 5 out of 5 / Based on30 votes