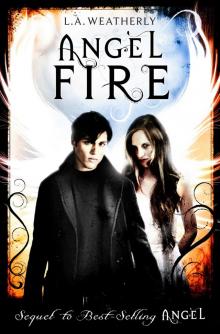 “IS THAT YOUR CAR?” asked the girl at the 7-Eleven checkout counter. “The shiny black one?”

Alex nodded as he put a Big Gulp coffee down in front of her.

“Cool,” breathed the girl, gazing out at the car. It was a Porsche Carrera, and the sunshine was glistening off it like liquid onyx. “We don’t see cars like that around here very often. ”

No, I bet you don’t, thought Alex, trying to remember where here was. Cattle Chute, Oklahoma, or some such dismal place. HOME OF THE ROOTIN’-TOOTIN’ COWBOYS! the bullet-ridden sign outside of town had proclaimed.

The girl smiled at him, widening her brown eyes as she rang up his coffee and the gas. “So, are you new in town?” she asked. VICKY, said her name tag. She was almost as tall as he was — which wasn’t that tall; he was just over five eleven — and her brown hair had been ironed so straight that you could get a paper cut from it.

After-school job, he thought, pulling out his wallet. Sixteen or so. She probably goes to that giant high school that I passed just outside of town.

The thought irritated and amused him in equal measure. He had only seen high school on TV: jocks in their letterman jackets, cheerleaders jumping around the field, couples hanging on to each other at the senior prom. It was another world, one so stupidly innocent that it was frightening. High-school students were old enough to be fighting, but none of them were doing it.

Because hardly anyone actually knew that there was a war on.

“Nah, just passing through,” he said. He handed her a couple of twenties.

Vicky’s face fell. “Oh. I was just wondering if you’d be going to our high school . . . but I guess you’re sort of old for that. What are you — twenty-one or something?”

“Or something,” he said with a slight grin. He was actually seventeen, but she was right in a way. In all the ways that mattered, he was old.

She took her time getting his change. “How long are you here for? Because, you know — if you’re looking for something to do or maybe someone to show you around —”

There was a beeping sound from his jeans pocket as his cell phone announced a text. Alex’s heart leaped. Turning away slightly, he pulled the phone out and flipped it open.

Yes! Immediately, Alex felt the fierce buzz sweep over him that he always got when there’d been a sighting. Christ, finally — it had been over a week; he’d been going insane. Putting his phone back in his pocket, he smiled at Vicky. Why not? He’d never see her again, anyway.

“Maybe next time,” he said, picking up his coffee. “Thanks, though. ”

As Alex pushed open the swinging door, the too-cold air-conditioning abruptly gave way to a flat, burning September. He slid into the Porsche. It was low to the ground, and its black leather seats wrapped around him in a dark embrace. It was comfortable as hell, actually, which was good, since he practically lived in it. ASPEN, CO, he punched into the GPS. Estimated time of arrival, 2:47 a. m. Almost nine hours. He’d drive straight through, he decided, taking a gulp of coffee. He didn’t need sleep — God, that was all he’d been doing since his last assignment.

Pulling out of the parking lot, Alex turned onto Highway 34 and headed north out of town. If you could call it a town: there were a few dozen grids of streets with clapboard houses and a couple of long, brightly lit strip malls, where the rootin’-tootin’ teenagers probably cruised up and down on Saturday night, drinking Bud Lights and shouting at each other. Just outside the town limits, it all ended and became dust and grain silos and oil pumps. Setting the cruise control to seventy, Alex turned on the radio. The Eagles came on, warbling about the Hotel California, and he grimaced. Switching to his iPod instead, he put on some neoclassical as the Porsche began to smoothly eat the miles.

And, briefly, he wondered what Vicky would think if she knew he had a semiautomatic rifle in his trunk.

The Rocky Mountains cradled Aspen deep within them, like a giant’s palm lightly cupping a handful of diamonds. The road twisted and turned down the mountain as Alex approached the city, his headlights sweeping the dark asphalt in front of him. Startled rabbits froze on the side of the road, their eyes wide, and once he disturbed a buck, sending it crashing and leaping into the woods.

His car clock read 2:51 as he crossed into the Aspen city limits. Not bad. The GPS directed him to Tyler Street, a quiet, tree-lined avenue not far from downtown. One of the streetlights was flickering; the rest glowed silently, showing a row of houses with large bay windows and immaculate front lawns. No house lights were on. Everyone was asleep.

Alex parked his car a few doors down from number 1124. Propping his elbows against the steering wheel, he surveyed the house, his dark eyebrows drawn together thoughtfully. Sometimes you could see a sign of them if you knew what to look for, but there was nothing here. It was just an ordinary house, though the front lawn wasn’t quite as pristine as the others. A few weeds grew here and there, spiking rebelliously up through the grass.

He’d transferred his rifle to the front seat before he began the descent into Aspen, and now he clicked the magazine into place and sighted along the rifle’s length, squinting through the infrared lens at the house. The front door snapped into an eerie reddish focus. He could even read the name on the wrought-iron mailbox that was affixed to the front porch wall: T. GOODMAN.

Goodman. Alex snorted despite himself. The creatures often took human last names to help them blend in; nice to see that some of them had a sense of humor. He screwed the silencer onto the rifle’s muzzle. It was state of the art, as sleek and gleaming as the rifle itself. Now all he had to do was wait. He settled back in his seat, gazing at the house. Back in the days when they’d gone out in teams, the other AKs had always hated stakeouts, but they were part of the hunt to Alex. Part of the buzz. Your senses had to be on alert; you couldn’t relax for a moment.

Almost an hour later, the front door opened. He had the rifle in place in less than a second, watching carefully through the lens. The tall man on the front porch paused to lock the door, then jogged briskly down the steps and strode off down the street, his footsteps echoing with purpose.

Alex lowered the rifle, unsurprised that T. Goodman was in his human form — they normally showed their true nature only when they were feeding. He waited until Goodman had turned the corner, heading toward downtown. Then he got out of his car and softly opened the trunk. He pulled on a black trench coat, eased the trunk closed again and set off, the rifle hidden safely beneath the coat’s long folds.

As he turned the corner, he could see his quarry about a block away, crossing the street. He slowed, letting his gaze drift out of focus. An aura swam into view around the dark figure: pale silver, with a faint blue light flickering feebly at its edges.

Alex quickened his step. The creature hadn’t fed in days — which meant that he must be on the hunt now.

Sure enough, the man led him to a bar downtown. SPURS, flashed the sign in front. A yellow-and-pink neon figure of a cowgirl wearing shorts and a tiny leather vest flashed on and off, waving her hat. There was the heavy pulse of music and a chorus of raucous male cheers.