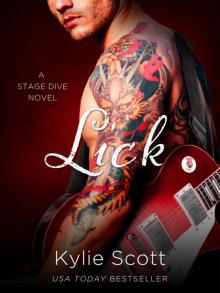 I woke up on the bathroom floor. Everything hurt. My mouth felt like garbage and tasted worse. What the hell had happened last night? The last thing I remembered was the countdown to midnight and the thrill of turning twenty-one, legal at last. I'd been dancing with Lauren and talking to some guy. Then BANG!

A whole line of shot glasses with lemon and salt on the side.

Everything I’d heard about Vegas was true. Bad things happened here, terrible things. I just wanted to crawl into a ball and die. Sweet baby Jesus, what had I been thinking to drink so much? I groaned and even that made my head pound. This pain had not been part of the plan.

“You okay?” a voice enquired, male, deep, and nice. Really nice. A shiver went through me despite my pain. My poor broken body stirred in the strangest of places.

“Are you going to be sick again?” he asked.

I opened my eyes and sat up, pushing my greasy blonde hair aside. His blurry face loomed closer. I slapped a hand over my mouth because my breath had to be hideous.

Slowly, he swam into focus. He was built and beautiful and strangely familiar. Impossible. I’d never met anyone like him.

He looked to be in his mid-to-late twenties—a man, not a boy. He had long, dark hair falling past his shoulders and sideburns. His eyes were the darkest blue. They couldn’t be real. Frankly, those eyes were overkill. I’d have swooned perfectly fine without them. Even with the tired red tinge they were a thing of beauty. Tattoos covered the entirety of one arm and half his bare chest. A black bird had been inked into the side of his neck, the tip of its wing reaching up behind his ear. I still had on the pretty, dirty white dress Lauren had talked me into. It had been a daring choice for me on account of the way it barely contained my abundance of boobage. But this beautiful man easily had me beat for skin on show. He wore just a pair of jeans, some scuffed black boots, a couple of small silver earrings, and a loose white bandage on his forearm.

Those jeans … he wore them well. They sat invitingly low on his hips and fit in all the right ways. Even my monster hangover couldn’t detract from the view.

And I was ogling him. My gaze darted to his face and he gave me a sly, knowing smile. Wonderful. “Yes. Please. ”

He grabbed a battered black leather jacket off the floor, the one I’d apparently been using as a pillow. Thank God I hadn’t puked on it. Clearly, this beautiful half naked man had seen me in all my glory, hurling multiple times. I could have drowned in the shame.

One by one he emptied the contents of his pockets out onto the cold white tiles. A credit card, guitar picks, a phone and a string of condoms. The condoms gave me pause but I was soon distracted by what emerged next. A multitude of paper scraps tumbled out onto the floor. All had names and numbers scrawled across them. This guy was Mr Popularity. Hey, I could definitely see why. But what on earth was he doing here with me?

Finally, he produced a small bottle of pain-killers. Sweet relief. I loved him, whoever he was and whatever he’d seen.

“You need water,” he said, and got busy filling a glass from the sink behind him.

The bathroom was tiny. We both barely fit. Given Lauren’s and my money situation, the hotel had been the best we could afford. She’d been determined to celebrate my birthday in style. My goal had been a bit different. Despite the presence of my hot new friend, I was pretty sure I’d failed. The pertinent parts of my anatomy felt fine. I’d heard things hurt after the first couple of times. They sure as hell had after the first. But my vagina might have been the only part of my body not giving me grief.

Still, I took a quick peek down the front of my dress. The corner of a foil package could still be seen, tucked into the side of my bra. Because if it was sitting there, strapped to me, no way would I be caught unprepared. The condom remained whole and hearty. How disappointing. Or maybe not. Finally plucking up the courage to get back on the horse, so to speak, and then not remembering it would have been horrible.

The man handed me the glass of water and placed two pills into my hand. He then sat back on his haunches to watch me. He had an intensity to him that I was in no condition to deal with.

“Thanks,” I said, then swallowed the aspirin. Noisy rumbles rose from my belly. Nice, very ladylike.

“Are you sure you’re okay?” he asked. His glorious mouth twitched into a smile as if we shared a private joke between us.

The joke being me.

All I could do was stare. Given my current condition, he was just too much. The hair, face, body, ink, all of it. Someone needed to invent a word superlative enough to describe him.

After a long moment it dawned on me that he expected an answer to his question. I nodded, still unwilling to unleash my morning breath, and gave him a grim smile. The best I could do.

He was certainly attentive. I didn’t know what I’d done to deserve such kindness. If I’d picked up the poor guy with promises of sex and then proceeded to spend the night with my head in the toilet, by rights he should be a bit disgruntled. Maybe he hoped I’d make good on the offer this morning. It seemed the only plausible explanation for why he’d linger.

Under normal conditions, he was light years out of my league and (for the sake of my pride) worlds away from my type. I liked clean-cut. Clean-cut was nice. Bad boys were highly overrated. God knows, I’d watched enough girls throw themselves at my brother over the years. He’d taken what they’d offered if it suited him, and then moved on. Bad boys weren’t the stuff serious relationships were made of. Not that I’d been chasing forever last night, just a positive sexual experience. Something not involving Tommy Byrnes being mad at me for getting a smear of blood on the back seat of his parents’ car. God, what a horrible memory. The next day the douche had dumped me for a girl on the track team half my size. He then added insult to injury by spreading rumors about me. I hadn’t been made bitter or twisted by this event at all.

What had happened last night? My head remained a tangled, throbbing mess, the details hazy, incomplete.

“We should get something into you,” he said. “You want me to order some dry toast or something?”

“No. ” The thought of food was not fun. Not even coffee appealed and coffee always appealed. I was half tempted to check myself for a pulse, just in case. Instead, I pushed my hand through my crappy hair, getting it out of my eyes. “No, I … ow!” Strands caught on something, tugging hard at my scalp. “Crap. ”

“Hang on. ” He reached out and carefully disentangled my messy do from whatever was causing the trouble. “There we go. ”

“Thanks. ” Something winked at me from my left hand, snagging my attention. A ring, but not just any ring. An amazing ring, a stupendous one.

It couldn’t be real. It was so big it bordered on obscene. A stone that size would cost a fortune. I stared, bemused, turning my hand to catch the light. The band beneath was thick, solid, and the rock sure shone and sparkled like the real deal.

“Ah, yeah. About that …” he said, dark brows drawn down. He looked vaguely embarrassed by the ice rink on my finger. “If you still wanna change it for something smaller, that’s okay with me. It is kinda big. I do get your point about that. ”

I couldn’t shake the feeling I knew him from somewhere. Somewhere that wasn’t last night or this morning or anything to do with the ridiculous beautiful ring on my finger.

“You bought me this?” I asked.

For a long moment he just stared at me. “You don’t remember?”

I really didn’t want to answer that. “What is that even? Two, three carats?”

“What do you remember?” he asked, voice hardening just a little.

“No. ” His frown increased until it owned his handsome face. “You have got to be fucking kidding me. You seriously don’t know?”

What to say? My mouth hung open, useless. There was a lot I didn’t know. To my knowledge, however, Cartier didn’t do costume jewelry. My head swam. Bad feelings unfurled within my stomach and bile burnt the back of my throat. Worse even than before.

I was not puking in front of this guy.

He took a deep breath, nostrils flaring. “I didn’t realize you’d had that much to drink. I mean, I knew you’d had a bit, but … shit. Seriously? You don’t remember us going on the gondolas at The Venetian?”

“We went on gondolas?”

“Fuck. Ah, how about when you bought me a burger? Do you remember that?”

“Wait a minute,” he said, watching me through narrowed eyes. “You’re just messing with me, aren’t you?”

He physically recoiled from me. “Let me get this straight, you don’t remember anything?”

“We got fucking married,” he growled.

This time, I didn’t make it to the toilet.

I decided on divorce while I brushed my teeth, practiced what I would say to him as I washed my hair. But you couldn’t rush these things. Unlike last night when I’d apparently rushed into marriage. Rushing again would be wrong, foolish. That, or I was a coward taking the world’s longest shower. Odds were on the latter.

Holy, holy hell. What a mess. I couldn’t even begin to get my head wrapped around it. Married. Me. My lungs wouldn’t work. Panic waited right around the corner.

No way could my desire for this disaster to go away come as a surprise to him. Puking on the floor had to have been a huge hint. I groaned and covered my face with my hands at the memory. His look of disgust would haunt me all my days.