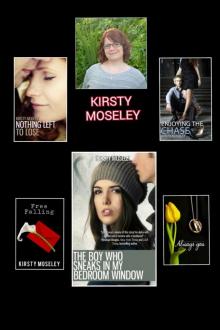 I heard the alarm beep behind me but it quickly cancelled so I didn’t bother to open my eyes. I was just drifting back into blissful sleep again when I became aware of someone singing quietly in my ear, and fingers trailing up and down my side, tickling my skin. I couldn’t help the goofy grin that stretched across my face.

I opened my eyes and half rolled over to see Luke lying against my back. His gorgeous face was merely inches away, and his big brown eyes were locked onto mine. His dark brown hair was messy and sticking out at all angles, but it suited him like that, it made him look a little rough and ready. He had a five o’clock shadow across his strong jaw and a big smile on his face that matched my own.

“Hip hip,” he mumbled, his lips almost touching mine.

He laughed too and finally pressed his soft lips to mine. I smiled against his mouth and wrapped my arm around his neck, pulling him closer to me as he sucked my bottom lip into his mouth, nibbling on it gently. I opened my mouth, praying I didn’t have morning breath, but knowing Luke he wouldn’t even care if I did.

I lost myself in the bliss of Luke’s kissing, silently wondering, as I had done hundreds of times, just what it was that he saw in me. Out of all the girls he could have chosen, he chose me, and I’d never understand it. His hand traced up my stomach as he kissed me deeply, making my toes curl as my body got so excited that I could barely think about anything other than his taste and the feel of his fingertips trailing over my body. Finally, he pulled away and kissed the tip of my nose.

“Good morning,” I mumbled, my voice barely above a whisper because of just waking up.

“Good morning, birthday girl,” he answered. “You know, I’ll never get used to how beautiful you look in the morning. The no make-up and messy bed hair really does it for me. So perfect,” he whispered, gripping my hip and pulling me closer to him again.

I smiled, tracing my fingers across his broad shoulders. “You’re just saying that to get into my pants. ”

He laughed and brushed his nose against mine. “Been there. Done that. You’re wearing my T-shirt,” he replied, grinning proudly as he tugged on the bottom of his T-shirt that I’d slept in.

I giggled and bit my lip. I’d had a year and seven months with him, and he still managed to make me feel like a giddy little girl, it was a little crazy really. “Whatever, Luke. ” I pulled his mouth to mine again as I rolled my eyes playfully.

He pulled back as I tried to deepen the kiss. “How about I give you your present now?” he offered, stroking the side of my face. The way he was looking at me made my face heat up; if I didn’t feel exactly the same about him then the soft, tender way he was looking at me would scare me. We were only eighteen, but I knew this was him, this was the guy, the one, and the look on his face told me that he was thinking exactly the same thing about me.

“Does your present involve me moaning your name?” I asked, raking my eyes over his body slowly, drinking in every inch of his sculpted chest, the V line that led down to the waistband of his black boxers that he was wearing.

He laughed wickedly. “The one I bought doesn’t, but if you want I’ll give you that one after. ”

I sighed as I thought about it, tracing one finger across his scratchy jaw line, imagining what it would feel like tickling my body. “Definitely,” I purred, nodding enthusiastically.

He grinned and immediately jumped out of the bed, and again I was struck by how lucky I was that this boy wanted me. Luke Hannigan was a jock, very popular at our school, and although he could be a jerk when he wanted to, he was the most adorable boyfriend in the world. Why he chose me I still didn’t understand. I wasn’t beautiful, I wasn’t popular, if anything I was a little nerdy. I took my school work seriously; I didn’t wear short shirts or slutty tops and jump on the sidelines cheering him on while he played football. I preferred to go without make-up and pull my hair up into a messy topknot, slob around in sweats and a T-shirt, than wear high heels and tank tops. I would rather go camping and wake up early so I could go hiking and watch the sun rise than stay in a spa and get a manicure. On paper Luke and I were total opposites. When we first got together people thought he was crazy for going for a nerdy girl like me. Thankfully he did though and I couldn’t be happier about it.

He came sauntering back over to the bed and dropped down next to me, making me giggle as he caught me looking at his body. His eyebrow rose knowingly as he smirked at me. He held out his hand, revealing a little box about the size of his palm. “Happy eighteenth birthday, baby,” he whispered.

I gulped and took the box from his hand. “Thanks. I hope you didn’t go crazy,” I muttered, looking at him gratefully. He smiled and shook his head as I tore at the shiny red paper he’d wrapped it in, eager to see what he’d bought me. When I got to the soft black velvet box, I chewed on my lip. My pulse drummed in my ears now that I knew it was jewellery and something I could keep and treasure. I smiled and pulled open the lid, gasping when I saw what he’d bought. Inside the box was an oval gold locket on a delicate gold chain. There was a swirly pattern on the front, with a little diamond set in the middle. It was beautiful.

“Luke, this is-” I gasped, not having the words to describe the exquisite thing he’d bought me.

He smiled and took the box out of my hand, flipping the locket over and handing it back to me again. I looked down at it and my heart melted into a puddle. He’d had it engraved on the back.

My eyes filled with tears. I still couldn’t think of anything to say. I had no words to describe how incredible this present was and how special it made me feel that he had gone out and chosen something this beautiful, just for me. “Thank you, it’s…” I looked at him in awe, and he kissed me lightly.

“You’re welcome,” he whispered against my lips. “You like it though, really? If not then I’ll buy you something else. ” He seemed a little worried about his choice.

I shook my head fiercely and clutched the little box to my chest protectively. “I love it, and I love you,” I said honestly.

He grinned. “I love you too, Maisie. ” He pointed at the box I was holding for dear life. “I couldn’t find a nice picture of us to put in it that was small enough. We’ll have to get one photoshopped or something. ”

I grinned and gripped the locket, releasing the little catch to open it, only to find a badly cut out photo of us had been placed inside. My heart swelled because of the effort he went to. He must have sorted through hundreds of photos just to find one that semi fitted in there, but the top of his head was cut off, as my was chin.

“I’ll sort something out,” I confirmed. “Put it on for me?” I requested, holding the box out for him. I watched as he pulled the delicate necklace from the box, I held my hair up over one shoulder and giggled as the cold locket touched my chest. When he was done, I gripped it in my hand and looked back at him, smiling smugly that he was mine. “How about the other present now?” I flirted, raising my eyebrows, smiling seductively.

He grinned and literally pounced on me, making me giggle and fall back into the pillows. Things were getting hot when suddenly there was a knock on the door. I squealed and pushed him off of me, at the same time that he jumped back, shocked, and fell on his butt out of the bed, groaning as his head hit the floor.

I bit my lip and looked at him worriedly. “You okay?”

The door
opened and I yanked the covers up to my shoulders, covering the fact that Luke had taken his shirt off of me seconds before the interruption. In walked my mom with a tray in her hands and a big smile on her face. I flicked my eyes to the floor on the other side of the bed, noticing that Luke had laid back, hiding himself from view as my mom walked in.

“Morning, happy birthday!” she chirped, completely oblivious that I’d snuck my boyfriend into the house while everyone was asleep last night.

“Hi, er… Thanks?” I muttered, trying not to blush.

“Are you getting up anytime soon? I’m making a birthday breakfast,” she offered, grinning happily. I smiled and nodded enthusiastically. Birthday breakfasts were the best, my mom made literally anything we wanted. I had the same every year - blueberry pancakes with whipped cream. She made my goofy twin brother a fried meat filled mess, and my dad usually went for chocolate chip pancakes, but Mom had to burn his for some reason, he was a little weird like that.

“Heck yeah! I’m just gonna, er…” I grasped wildly for some excuse that would give me a few minutes in my room so that Luke could get dressed and I could sneak him back out of the front door.

She smirked at me and put the tray down on my dresser. “I made you a coffee. Breakfast will be done in about fifteen minutes so that’ll give you time to drink it,” she said, shrugging, still grinning. “And Luke, next time you sneak in, make sure you park your car more than two houses away,” she teased, smirking at the empty space where he was hiding down beside the bed.

My mouth dropped open in shock as Luke sat up from where he was, looking at her guiltily, rubbing the back of his neck. “Yeah, sorry about that, Riley,” he muttered, wincing. I just sat there blushing as my mom shook her head and rolled her eyes.

“Amateurs,” she teased. “Don’t let Clay or Alex catch you in here, you know they’ll hurt you,” she joked, laughing to herself.

I giggled, and Luke nodded quickly. That was true, my dad and brother wouldn’t take too kindly to the fact that my boyfriend had secretly spent the night here. “I won’t, thanks,” Luke agreed sheepishly.

She smiled and walked back towards the door again. “I made you a coffee too, Luke. ” She waved her hand at the tray dismissively.

Free Falling by Kirsty Moseley / Young Adult / Romance & Love have rating 4.1 out of 5 / Based on77 votes