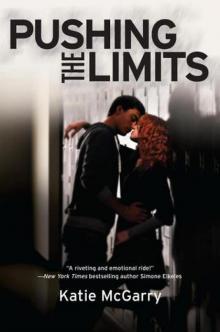 “My father is a control freak, I hate my stepmother, my brother is dead and my mother has … well … issues. How do you think I’m doing?”

That’s how I would have loved to respond to Mrs. Collins’s question, but my father placed too much importance on appearance for me to answer honestly. Instead, I blinked three times and said, “Fine. ”

Mrs. Collins, Eastwick High’s new clinical social worker, acted as if I hadn’t spoken. She shoved a stack of files to the side of her already cluttered desk and flipped through various papers. My new therapist hummed when she found my three-inch-thick file and rewarded herself with a sip of coffee, leaving bright red lipstick on the curve of the mug. The stench of cheap coffee and freshly sharpened pencils hung in the air.

My father checked his watch from the chair to my right and, on my left, the Wicked Witch of the West shifted impatiently. I was missing first period calculus, my father was missing some very important meeting, and my stepmother from Oz? I’m sure she was missing her brain.

“Don’t you just love January?” Mrs. Collins asked as she opened my file. “New year, new month, new slate to start over on. ” Not even waiting for a reply, she continued, “Do you like the curtains? I made them myself. ”

In one synchronized movement, my father, my stepmother and I turned our attention to the pink polka-dotted curtains hanging on the windows overlooking the student parking lot. The curtains were too Little House on the Prairie with the color scheme of a bad rave for my taste. Not a single one of us answered and our silence created a heavy awkwardness.

My father’s BlackBerry vibrated. With exaggerated effort, he pulled it out of his pocket and scrolled down the screen. Ashley drummed her fingers over her bloated belly and I read the various handpainted plaques hanging on the wall so I could focus on anything that wasn’t her.

Failure is your only enemy. The only way up is to never look down. We succeed because we believe. How much wood would a woodchuck chuck if a woodchuck could chuck wood?

Okay—so that last one didn’t make the wall of sayings, but I would have found it amusing.

Mrs. Collins reminded me of an overgrown Labrador retriever with her blond hair and much too friendly attitude. “Echo’s ACT and SAT scores are fabulous. You should be very proud of your daughter. ” She gave me a sincere smile, exposing all of her teeth.

Start the timer. My therapy session had officially begun. Close to two years ago, after the incident, Child Protective Services had “strongly encouraged” therapy—and Dad quickly learned that it was better to say yes to anything “strongly encouraged. ” I used to go to therapy like normal people, at an office separate from school. Thanks to an influx in funding from the state of Kentucky and an overenthusiastic social worker, I’d become part of this pilot program. Mrs. Collins’s sole job was to deal with a few kids from my high school. Lucky me.

My father sat up taller in his seat. “Her math scores were low. I want her to retake the tests. ”

“Is there a bathroom nearby?” Ashley interrupted. “The baby loves to sit on my bladder. ”

More like Ashley loved to make everything about her. Mrs. Collins gave her a strained smile and pointed to the door. “Go out to the main hallway and take a right. ”

The way she maneuvered out of her chair, Ashley acted as if she carried a thousand-pound ball of lead instead of a tiny baby. I shook my head in disgust, which only drew my father’s ice-cold stare.

“Mr. Emerson,” Mrs. Collins continued once Ashley left the room, “Echo’s scores are well above the national average and, according to her file, she’s already applied to the colleges of her choice. ”

“There are some business schools with extended deadlines I’d like her to apply to. Besides, this family does not accept ‘above average. ’ My daughter will excel. ” My father spoke with the air of a deity. He might as well have added the phrase so let it be written, so let it be done. I propped my elbow on the armrest and hid my face in my hands.

“I can see that this really bothers you, Mr. Emerson,” Mrs. Collins said in an annoyingly even tone. “But Echo’s English scores are close to perfect…. ”

My test scores were the least of my concerns. Finding the money to fix Aires’ car was the worry that plagued my brain. Since Aires’ death, my father had remained stubborn on the subject, insisting we should sell it.

“Echo, are you happy with your scores?” asked Mrs. Collins.

I peeked at her through the red, curly hair hanging over my face. The last therapist understood the hierarchy of our family and talked to my father, not me. “Excuse me?”

“Are you happy with your ACT and SAT scores? Do you want to retake the tests?” She folded her hands and placed them on top of my file. “Do you want to apply to more schools?”

I met my father’s tired gray eyes. Let’s see. Retaking the tests would mean my father hounding me every second to study, which in turn would mean me getting up early on a Saturday, blowing the whole morning frying my brain and then worrying for weeks over the results. As for applying to more schools? I’d rather retake the tests. “Not really. ”

The worry lines forever etched around his eyes and mouth deepened with disapproval. I changed my tune. “My dad is right. I should retake the tests. ”

Mrs. Collins scratched away in my file with a pen. My last therapist had been highly aware of my authority issues. No need to rewrite what was already there.

Ashley waddled back into the room and dropped into the seat next to me. “What did I miss?” I’d honestly forgotten she existed. Oh, if only Dad would, too.

“Nothing,” my father replied.

Mrs. Collins finally lifted her pen from the page. “Ask Mrs. Marcos for the next testing dates before you go to class. And while I’m playing the role of guidance counselor, I’d like to discuss your schedule for the winter term. You’ve filled your free periods with multiple business classes. I was wondering why. ”

The real answer, because my father told me to, would probably irritate multiple people in the room so I ad-libbed, “They’ll help prepare me for college. ” Wow. I’d said that with all the enthusiasm of a six-year-old waiting for a flu shot. Bad choice on my part. My father shifted in his seat again and sighed. I considered giving a different answer, but figured that reply would also come off flat.

Mrs. Collins perused my file. “You’ve shown an incredible talent in the arts, specifically painting. I’m not suggesting you drop all of your business courses, but you could drop one and take an art class instead. ”

“No,” my father barked. He leaned forward in his seat, steepling his fingers. “Echo won’t be taking any art classes, is that clear?” My father was a strange combination of drill instructor and Alice’s white rabbit: he always had someplace important to go and enjoyed bossing everyone else around.

I had to give Mrs. Collins credit; she never once flinched before she caved. “Crystal. ”

“Well, now that we’ve settled that …” Ashley and her baby bump perched on the edge of the chair, preparing to stand. “I accidentally overbooked today and I have an OB appointment. We may find out the baby’s gender. ”

“Mrs. Emerson, Echo’s academics aren’t the reason for this meeting, but I understand if you need to leave. ” She withdrew an official letter from her top drawer as a red-faced Ashley sat back in her seat. I’d seen that letterhead several times ov
er the past two years. Child Protective Services enjoyed killing rainforests.

Mrs. Collins read the letter to herself while I secretly wished I would spontaneously combust. Both my father and I slouched in our seats. Oh, the freaking joy of group therapy.

While waiting for her to finish reading, I noticed a stuffed green frog by her computer, a picture of her and some guy— possibly her husband—and then on the corner of her desk a big blue ribbon. The fancy kind people received when they won a competition. Something strange stirred inside me. Huh—weird.

Mrs. Collins hole-punched the letter and then placed it in my already overwhelmed file. “There. I’m officially your therapist. ”

When she said nothing else, I drew my gaze away from the ribbon to her. She was watching me. “It’s a nice ribbon, isn’t it, Echo?”

My father cleared his throat and sent Mrs. Collins a death glare. Okay, that was an odd reaction, but then again, he was irritated just to be here. My eyes flickered to the ribbon again. Why did it feel familiar? “I guess. ”

Her eyes drifted to the dog tags I absently fingered around my neck. “I’m very sorry for your family’s loss. What branch of the armed forces?”

Great. My father was going to have a stinking coronary. He’d only made it clear seventy-five times that Aires’ dog tags were to stay in the box under my bed, but I needed them today—new therapist, the two-year anniversary of Aires’ death still fresh, and the first day of my last semester of high school. Nausea skipped and played in my intestines. Avoiding my father’s disappointed frown, I took great pains to search my hair for split ends.

“Marine,” my father answered curtly. “Look, I’ve got a meeting this morning with prospective clients, I promised Ashley I’d go to her doctor’s appointment and Echo’s missing class. When are we going to wrap this up?”

“When I say so. If you’re going to make these sessions difficult, Mr. Emerson, I will be more than happy to call Echo’s social worker. ”

I fought the smile tugging at my lips. Mrs. Collins played a well-choreographed hand. My father backed down, but my stepmother on the other hand …

“I don’t understand. Echo turns eighteen soon. Why does the state still have authority over her?”

“Because it’s what the state, her social worker and myself think is in her best interest. ” Mrs. Collins closed my file. “Echo will continue therapy with me until she graduates this spring. At that point, the state of Kentucky will release her—and you. ”

She waited until Ashley nodded her silent acceptance of the situation before continuing. “How are you doing, Echo?”

“Really?” She tapped a finger against her chin. “Because I would have thought that the anniversary of your brother’s death might trigger painful emotions. ”

Mrs. Collins eyed me while I stared blankly in return. My father and Ashley watched the uncomfortable showdown. Guilt nagged at me. She didn’t technically ask me a question, so in theory, I didn’t owe her a response, but the need to please her swept over me like a tidal wave. But why? She was another therapist in the revolving door. They all asked the same questions and promised help, but each of them left me in the same condition as they found me—broken.