In the Company of Vampires 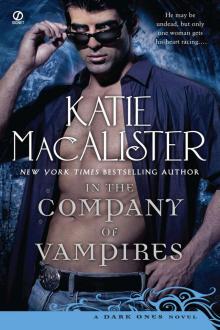 My mother’s voice was just as distant as the wind. “Honestly, Fran, I have no idea what you thought you were doing—”

I tuned her out to listen as hard as I could for the elusive sound that flirted on the edges of my awareness.

It was Ben. I knew it was Ben, and he needed my help. Desperately. I ran into the darkness to find him, the nightmare re-creating an event that somewhere in my brain I recognized had actually happened, but this version of it was twisted by both the passing of time and my own tormented emotions.

The moon was out, but its illumination did not reach through the dense forest. I dodged skeletal branches of trees as they tried to snatch at my hair and clothing. I’m coming, Ben! I will save you!

Desperation filled me, both mine at the need to find him, to help him, and that which he was pouring into me: the knowledge that I wouldn’t be there in time.

Sobs of pure frustration caught in my throat as I battled my way through the eerily grabbing tree branches until at last I saw a dark shape slumped up against a dead tree.

He wore the tattered remains of a leather jacket, his shirt completely gone, his face, arms, and torso stained dark with a crisscross pattern of blood oozing up from deep slashes. As I ran toward him, his body slumped to the side. Too . . . late . . .

I screamed in wordless horror as he died in front of me, the sound echoing in my head until I woke, drenched with sweat, from the nightmare.

“Nightmare again?” came a sleepy voice from the other side of the room.

I swallowed back the fear that clutched my throat. “Yes. Sorry I woke you. ”

I turned my pillow over to the cool side, my heart as sick as my stomach. It wasn’t just the stress of my job that had given me the nightmare. I was having them more and more frequently, making me all that more desperate to escape my life.

I lay back down, and prayed for dreamless sleep.

“And I said to her, Look, you don’t own me, okay? Yes, we have incredibly hot sex, but there’s more to a relationship than just that. And she said that she just wanted to be with me, and couldn’t live without me, and all sorts of things like that. Don’t get me wrong. It’s nice to have your girlfriend want you and all, but there’s such a thing as stifling someone! There are times when I think you’re so lucky, Fran. You have no idea what it’s like to be in a relationship that’s doomed from the very start. ”

I stared blankly at the sidewalk, my heart contracting at Geoff’s words. She was a remarkably pretty girl despite her masculine name (she said her parents didn’t believe in conforming to traditional gender roles), with shoulder-length black hair and cute freckles. Although we’d been roomies for almost a year, I was still a bit startled by her lack of awareness.

“You tell your boyfriend you want some space, and poof! He gives you space. You see him, what, once a year? And the rest of the time he leaves you alone to do whatever you want. Now that’s a mature relationship. Do you have a couple of bucks I can borrow? I don’t get paid until Friday. ”

“He’s not really my boyfriend. ” I reached into my jeans pocket for my Starbucks card, handing it to her as she stopped at the walk-up latte window and ordered a latte and an Americano.

“Thanks, Fran. You’re a doll. What were we talking about? Oh, your boyfriend. You’re so lucky with him. ”

“Your setup is perfect,” Geoff said with blithe disregard. “He’s in Europe, and you’re here, doing your own thing. No one on your back all the time, telling you what to do. No one demanding that you stop what you’re doing to pay attention to her. No one pressuring you with drama queen scenes, saying she will die if you’re not right there for her. I envy you, Fran. I really do. ”

I accepted the latte she handed me, following as she led the way down the street toward the old redbrick building where we shared a third-floor apartment, each step causing my soul to cry a little more. I ached to tell her the truth, but had decided when I first met her that she would never understand. Her feet were too firmly planted in the everyday world. How could I explain that my former boyfriend was a vampire?

“I told Carmen that I needed a little space, too, but you know what she did? Started cutting herself. ” Geoff’s cell phone burbled. She pulled it out as she continued to talk. “Like I don’t have enough of my own emotional issues that I have to deal with hers, too? Do you have any idea what a stress it is to be bisexual these days? My therapist says I’m just asking for trouble, but what does she know? Oh, great, it’s the drama queen again. This is like the fiftieth time she’s texted me today. I had to turn off my phone in surgery because she wouldn’t stop sending me messages, and Dr. Abbot said she was going to end up pulling some poor dog’s tooth instead of cleaning it if my phone made her jump just one more time. ”

I murmured something noncommittal.

We stopped in front of the residents’ door at the side of the building. The first floor was taken up by a bookstore, one of my favorite places to spend time. “My hands are full, Fran. Can you get your keys?”

I set my latte on the large metal mailbox that was attached to the building and hunted through the backpack I used as a bag for my keys, my fingers groping blindly in its depths.

“I tell you, if I could, I’d trade Carmen for your Brent any day. ”

“Ben,” I corrected, his name bringing another little zap of pain to my chest. “He’s not mine. You can have him. ”

“He’s like the ideal man, leaving you alone except for when you want him. If I was into guys as much as girls—and I’m not because some men are okay, but most of them have way too many issues for me—then I’d definitely give you a run for your money with him. But I’m not, so you don’t have to worry. ”

“That’s reassuring,” I murmured, the tiniest of smiles making an appearance as I pulled out a couple of paperbacks in order to grope around the bottom of my backpack. If there was one thing I knew about Ben, it was that he wasn’t looking for another woman.

At least I didn’t think he was. I frowned, thinking about the last time I’d spoken to him. It was the last and biggest in a series of arguments, and he’d sounded so distant and cold. . . .

“I’m loyal that way. It’s one of the reasons why we’re such good roomies. Because seriously, there are some weirdos out there you can get stuck with. And you’re just as normal as they come. ” She glanced toward my hands. “Well, almost as normal as they come. But you know, hey, everyone has their little quirks, right? And I can definitely put up with you being a tiny bit paranoid about germs and insisting on wearing latex gloves all the time. It doesn’t bother me at all. It’s probably good, actually, given all the colds and flus that go around nowadays, and if you want to look like a goth by wearing black lace gloves over the latex ones . . . Well, that’s no big deal, either. My last roomie was into that Lolita crap, and you looking a bit gothy is a big improvement on that, let me tell you! Although you don’t really look goth anymore since you cut your hair and dyed it auburn—”

I frowned harder into the blackness of my bag, still not finding my keys, so frustrated by that fact, it took me a few seconds to realize that Geoff wasn’t talking anymore. I looked around, my eyes opening in surprise as a large man in black overalls shoved Geoff into a van.

“Goddess!” I yelled, dropping my backpack to run toward them. “Stop that! Help! Someone hel
p! My friend is being kidnapped!”

“Mmrph!” Geoff said, the man’s hand over her mouth. Her eyes were filled with panic as she struggled. A second man was in the back of the van, grabbing her legs as she tried to kick the first guy.

“Help!” I screamed again, but the street, normally filled with shoppers, was strangely devoid of anyone else. It was up to me to save Geoff. Without thinking, I leaped forward as the driver of the van gunned the engine, throwing myself into the back of the van on top of Geoff and the first man, who was in the process of slamming shut the door.

“Let go of her,” I growled, curling my fingers into a fist the way Ben had showed me all those years ago. “Or you’re going to be really, really sorry!”

“You’ll be the one who is sorry,” the man said in a heavy Scandinavian accent, his eyes holding a red light that warned me he wasn’t a common, average kidnapper. “The master seeks this one. Begone. ”

Before I could land the punch I was about to make, the man threw his weight against me, sending me flying backward. Frantic to keep from falling, I grabbed at him, but it did little good. All I got was a necklace the man had been wearing before I tumbled out of the van, hitting the street hard enough to knock me silly for a few seconds. When I looked up, trying desperately to clear my vision, the street was empty.

“The master,” I repeated, getting painfully to my feet and hobbling over to the sidewalk. I’d heard someone refer to the master five years ago. “Oh, no, it couldn’t be him. What on earth does he want with Geoff? It’s me he swore to get revenge against!”

I looked down at the necklace in my hand. Because of my gloves, I couldn’t feel anything other than the weight of the gold chain. I should have called the police and reported an abduction. I should have screamed until someone came to help me. I should have let someone with power get Geoff back. I should have . . .

“Bloody boiling bullfrogs!” I snarled, ripping off one of my black lace gloves and the thin latex glove beneath it, taking a deep breath. If it really was who I thought it was behind the kidnapping, the police wouldn’t be able to help at all, which meant it was up to me to find out who was behind the abduction of Geoff.

The second my bare hand touched the chain, my head was filled with images, a variety of faces that I didn’t recognize, a confusing jumble of women in old-fashioned outfits with bodices and long skirts, of men riding horses across a coastline, waving swords and yelling at the top of their lungs, and of a big structure burning while screams ripped into the night.