The Undead in My Bed 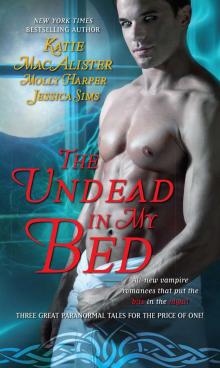 That woman is hopelessly inept at trespassing. ”

The female form clinging to the top of the stone wall attached on either side of the massive wrought-iron walls weaved perilously.

“If she’s not careful,” I told the cat standing next to me, watching as the female peered down at the shrubs beneath her, “she’s going to fall right into that patch of… there, you see?”

The trespasser, I was mildly interested to note, wasn’t the angular blonde who’d attacked me the day before. This woman was smaller and rounder, pleasantly plump, with a mass of dark red curls pulled back from her face. A few strands had escaped in her efforts to scale the wall, and I wondered if she knew that a clump of leaves was listing to the side, tangled in the depths of her hair.

She must have realized that she had landed in a patch of poison oak, because after a few seconds of muttering to herself, she leaped up shrieking and drew a few quick symbols in the air.

“Did she just ward herself?” I asked the cat.

“That’s what I thought. ” I frowned at the woman as she gathered up the things that had fallen out of her handbag. As she turned, I got a better look at her face. A jolt of electricity tingled up my spine when I realized that she was the nun I’d seen the night before. “What sort of a holy woman knows about wards?”

Johannes did not answer, not that he could—a small blessing for which I’d been thankful over the course of the last three centuries.

“It doesn’t matter,” I said with grim determination as I strode after the woman when she hurried past me on the pitted gravel drive. “Whatever it is the little nun is doing here, it’s going to stop right now. ”

She didn’t hear me until I was about to grab her, and then she barely had time to gasp as she whirled around. I slapped one hand over her mouth, the other on her neck.

Wide gray eyes considered me for three seconds before the lids fluttered closed as she toppled forward. I released my hold on her neck, catching her and swinging her up into my arms. “Now we’ll get some answers,” I told the unconscious woman as I carried her into the lodge.

She felt warm and soft in my arms, the faint scent of lilacs teasing my nose. I sternly told my libido to stop noticing just how nice a scent that was or that her face was lightly freckled, her skin as smooth as satin, all of which left me with the desire to stroke her soft curves. Her mouth looked as soft as the rest of her, a delicate rose in color, as if she’d been eating strawberries. A sudden rush of blood to my groin had me reminding myself that lusting after a nun was not appropriate, especially one who disregarded newly installed chains and locks and innumerable “No Trespassing” signs scattered around the estate. Still, it took some effort to force my gaze away from the temptation of her sweetly curved lips.

It took ten minutes to round up some twine from the remains of a broken packing box, but after a few minutes, I stepped back and admired my handiwork. The woman was slumped in a chair, her hands bound behind her, a gag around her neck waiting to be pulled forward and put into place in case she started screaming.

Johannes sniffed at her feet and turned away, apparently bored. I wasn’t fooled in the least. He always took profound interest in any female.

“Hrn?” The little nun snorted and blinked, squinting at me as I stood before her, my arms crossed. “Fleg?”

“Do you speak English?” I asked, switching to French. “French? German?”

“I’m English,” she answered, blinking rapidly as she obviously tried to bring me into focus. “Who are you? Did you… ugh, my head… knock me out?”

“I applied pressure to your neck, causing you to black out,” I said sternly, trying hard not to notice how her breasts swelled when she struggled to bring her arms forward.

“You Vulcan neck-pinched me? Why am I tied up? And did you know you’re a Dark One?”

I frowned. “What does a nun know of either Vulcan neck pinches or Dark Ones?”

She stopped trying to free her hands. “I’m not a nun, I’m a Guardian. And a Beloved, so I know a Dark One when I see him. Or her. But mostly, you’re hims, not hers, aren’t you? Do you have any pain tablets? I had a repulsively annoying headache before you Vulcanized me, and now it’s just that much worse. ”

“No,” I answered, increasing the intensity of my frown. The little nun didn’t seem to be the least bit intimidated to find herself bound and held prisoner.

“No you don’t know you’re a Dark One, no you’re not mostly males, or no you don’t have any pain meds?” Her eyes shimmered with gentle curiosity.

“Of course I know I’m a Dark One,” I snapped, annoyed and at the same time strangely pleased that she wasn’t afraid of me. “I’ve been one almost my entire life. You are not a Beloved, however. ”

“No. Don’t talk to him. ” I scented the air. The lodge, like the Abbey itself, was a damp, mildewed, crumbling relic of grander times. The air was redolent with the smell of molds, wetness, and the leavings of various small animals that had claimed the lodge for their own. Tattered bits of wallpaper moved gently in a draft from a broken window, the walls streaked with equal amounts of grime and quiet despair.

And yet, despite the odors of the decaying building, the scent of sun-warmed lilacs lingered, stirring something deep in my belly.

“If you were a Beloved, I would know,” I told her.

“Is something wrong with his mouth?” she asked, making little chirruping noises at Johannes until—as I knew he would—the massive cat leaped onto her knees and purred at her, his eyes half-closed.

“I thought so, because most cats don’t have one lip pulled up so a fang shows all the time. Was he hurt or something?”

“No, it is simply how he is,” I answered, wanting to simultaneously shake her and kiss her.

Her gaze assessed me. “He’s not your cat, but you know he wasn’t hurt?”

“No, he is not my cat. He simply lives with me and accompanies me wherever I go. That is all. Why is a Guardian pretending to be a Beloved and a nun?”

“Why is a Dark One abducting innocent people?” she countered.

I leaned over her in an attempt to intimidate. “Why did you climb over the fence when the signs clearly state that your presence is not welcome?”

She blinked those lovely soft gray eyes at me. “You’re the one who put up the signs? Did you also chain the gate closed? We thought it might be the local authorities, although Teresa did show the police the documents the estate agent sent her, but you know how it is with Czech officials—they do love their paperwork—and Teresa figured she must have missed dotting an i or crossing a t. ”

“I am Czech,” I said with much dignity.

“Really?” She tipped her head to consider me, not in the least bit intimidated by me, dammit. “You don’t sound Czech. You sound British, like me. Who are you, exactly?”

“My name is Gray. Grayson Soucek, if you were going to ask, and I suspect you were, since you seem to ask everything else that occurs to you. ”

She giggled, and the sound went straight to my groin. I ignored the tightening sensation, grimly reminding myself that not only was she trouble, but even assuming that she wasn’t really a nun, she was a housebreaker or, at best, a squatter, neither of which I intended on tolerating.

“Hi, Gray, I’m Noelle. I’ve always been naturally curious, and I found out a long time ago that if you don’t ask questions, you won’t learn the answers. I lik
e your name, and it does sound Czech, but what are you doing here? And why have you abducted me? Why do you have a cat who isn’t your cat? And why don’t you think I’m a Beloved?”

“That could be because the man I was supposed to end up with chose someone else over me,” she said in a voice that had curiously lost its luster.

Startled, I took a step back. “What did you say?”

“You don’t know him, do you? His name is Sebastian, and his replacement Beloved—who, I admit, is a very dear friend, and really, I couldn’t be happier for them, especially now that they’re expecting their first child, but still, you can understand how having your Dark One want someone else could wound your ego—his replacement Beloved’s name is Belle. Ysabelle, really. We used to share a flat. Could you untie me? Your kitty wants me to pet him. ”

I took a deep breath, mentally shaking my head at both my surprise and the fact that I found this woman, this housebreaker and possible nun, more attractive with each word out of her delectable mouth. “No, I do not know a Dark One named Sebastian, not that I asked you about him in the first place. I will untie you, but if you make any attempt to escape, you will find yourself in a much worse position than you are currently in. ”

“You did ask me, you know,” Noelle said as I moved behind her to slice the twine binding her wrists. “You said I don’t smell like one, and I explained why I don’t smell at all. ”

Again, I was aware of a sense of something profoundly unexpected happening. I didn’t say anything about you smelling.

Johannes, I answered as I moved around to the front again, wondering to myself if I had suddenly gone insane.

“I’m afraid I can’t answer that, not having known you for more than ten minutes, but I can say that it’s not exactly normal popping out at people and Vulcan neck-pinching them. But outright insane? Hard to say. You are such a loving kitty, aren’t you, although you have a very unusual name. ” Her head bent over Johannes as she murmured soft little words of affection to the cat. He’d eat up every word, I knew, and make everyone’s life a hell until he finally grew tired of her.