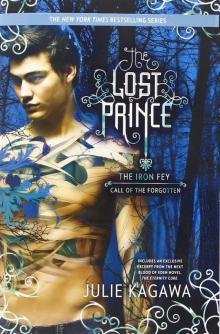 My name is Ethan Chase.

And I doubt I’ll live to see my eighteenth birthday.

That’s not me being dramatic; it just is. I just wish I hadn’t pulled so many people into this mess. They shouldn’t have to suffer because of me. Especially…her. God, if I could take back anything in my life, I would never have shown her my world, the hidden world all around us. I knew better than to let her in. Once you see Them, they’ll never leave you alone. They’ll never let you go. Maybe if I’d been strong, she wouldn’t be here with me as our seconds tick away, waiting to die.

It all started the day I transferred to a new school. Again.

The alarm clock went off at 6:00 a. m. , but I had been awake for an hour, getting ready for another day in my weird, screwed-up life. I wish I was one of those guys who roll out of bed, throw on a shirt and are ready to go, but sadly, my life isn’t that normal. For instance, today I’d filled the side pockets of my backpack with dried Saint-John’s-wort and stuffed a canister of salt in with my pens and notebook. I’d also driven three nails into the heels of the new boots Mom had bought me for the semester. I wore an iron cross on a chain beneath my shirt, and just last summer I’d gotten my ears pierced with metal studs. Originally, I’d gotten a lip ring and an eyebrow bar, too, but Dad had thrown a roof-shaking fit when I came home like that, and the studs were the only things I’d been allowed to keep.

Sighing, I spared a quick glance at myself in the mirror, making sure I looked as unapproachable as possible. Sometimes, I catch Mom looking at me sadly, as if she wonders where her little boy went. I used to have curly brown hair like Dad, until I took a pair of scissors and hacked it into jagged, uneven spikes. I used to have bright blue eyes like Mom and, apparently, like my sister. But over the years, my eyes have become darker, changing to a smoky-blue-gray—from constant glaring, Dad jokes. I never used to sleep with a knife under my mattress, salt around my windows, and a horseshoe over my door. I never used to be “brooding” and “hostile” and “impossible. ” I used to smile more, and laugh. I rarely do any of that now.

I know Mom worries about me. Dad says it’s normal teenage rebellion, that I’m going through a “phase,” and that I’ll grow out of it. Sorry, Dad. But my life is far from normal. And I’m dealing with it the only way I know how.

“Ethan?” Mom’s voice drifted into the room from beyond the door, soft and hesitant. “It’s past six. Are you up?”

“I’m up. ” I grabbed my backpack and swung it over my white shirt, which was inside out, the tag poking up from the collar. Another small quirk my parents have gotten used to. “I’ll be right out. ”

Grabbing my keys, I left my room with that familiar sense of resignation and dread stealing over me. Okay, then. Let’s get this day over with.

I have a weird family.

You’d never know it by looking at us. We seem perfectly normal; a nice American family living in a nice suburban neighborhood, with nice clean streets and nice neighbors on either side. Ten years ago we lived in the swamps, raising pigs. Ten years ago we were poor, backwater folk, and we were happy. That was before we moved into the city, before we joined civilization again. My dad didn’t like it at first; he’d spent his whole life as a farmer. It was hard for him to adjust, but he did, eventually. Mom finally convinced him that we needed to be closer to people, that I needed to be closer to people, that the constant isolation was bad for me. That was what she told Dad, of course, but I knew the real reason. She was afraid. She was afraid of Them, that They would take me away again, that I would be kidnapped by faeries and taken into the Nevernever.

Yeah, I told you, my family is weird. And that’s not even the worst of it.

Somewhere out there, I have a sister. A half sister I haven’t seen in years, and not because she’s busy or married or across the ocean in some other country.

No, it’s because she’s a queen. A faery queen, one of Them, and she can’t ever come home.

Tell me that’s not messed up.

Of course, I can’t ever tell anyone. To normal humans, the fey world is hidden—glamoured and invisible. Most people wouldn’t see a goblin if it sauntered up and bit them on the nose. There are very few mortals cursed with the Sight, who can see faeries lurking in dark corners and under beds. Who know that the creepy feeling of being watched isn’t just their imagination, and that the noises in the cellar or the attic aren’t really the house settling.

Lucky me. I happen to be one of them.

My parents worry, of course, Mom especially. People already think I’m weird, dangerous, maybe a little crazy. Seeing faeries everywhere will do that to you. Because if the fey know you can see them, they tend to make your life a living hell. Last year, I was kicked out of school for setting fire to the library. What could I tell them? I was innocent because I was trying to escape a redcap motley that followed me in from the street? And that wasn’t the first time the fey had gotten me into trouble. I was the “bad kid,” the one the teachers spoke about in hushed voices, the quiet, dangerous kid whom everyone expected would end up on the evening news for some awful, shocking crime. Sometimes, it was infuriating. I didn’t really care what they thought of me, but it was hard on Mom, so I tried to be good, futile as it was.

This semester, I’d be going to a new school, a new location. A place I could “start clean,” but it wouldn’t matter. As long as I could see the fey, they would never leave me alone. All I could do was protect myself and my family, and hope I wouldn’t end up hurting anyone else.

Mom was at the kitchen table when I came out, waiting for me. Dad wasn’t around. He worked the graveyard shift at UPS and often slept till the middle of the afternoon. Usually, I’d see him only at dinner and on weekends. That’s not to say he was happily oblivious when it came to my life; Mom might know me better, but Dad had no problem doling out punishments if he thought I was slacking, or if Mom complained. I’d gotten one D in science two years ago, and it was the last bad grade I’d ever received.

“Big day,” Mom greeted me as I tossed the backpack on the counter and opened the fridge, reaching for the orange juice. “Are you sure you know the way to your new school?”

She hesitated. I knew she didn’t want me driving there alone, even though I’d worked my butt off saving up for a car. The rusty, gray-green pickup sitting next to Dad’s truck in the driveway represented an entire summer of work—flipping burgers, washing dishes, mopping up spilled drinks and food and vomit. It represented weekends spent working late, watching other kids my age hanging out, kissing girlfriends, tossing away money like it fell from the sky. I’d earned that truck, and I certainly wasn’t going to take the freaking bus to school.

But because Mom was watching me with that sad, almost fearful look on her face, I sighed and muttered, “Do you want me to call you when I get there?”

“No, honey. ” Mom straightened, waving it off. “It’s all right, you don’t have to do that. Just…please be careful. ”

I heard the unspoken words in her voice. Be careful of Them. Don’t attract their attention. Don’t let Them get you into trouble. Try to stay in school this time.

She hovered a moment longer, then placed a quick peck on my cheek and wandered into the living room, pretending to be busy. I drained my juice, poured another glass, and opened the fridge to put the container back.

As I closed the door, a magnet slipped loose and pinged to the floor, and the note it was holding fluttered to the ground. Kali demonstration, Sat
. , it read. I picked it up, and I let myself feel a tiny bit nervous. I’d started taking kali, a Filipino martial art, several years ago, to better protect myself from the things I knew were out there. I was drawn to kali because not only did it teach how to defend yourself empty-handed, it also taught stick, knife and sword work. And in a world of dagger-toting goblins and sword-wielding gentry, I wanted to be ready for anything. This weekend, our class was putting on a demonstration at a martial arts tournament, and I was part of the show.

If I could stay out of trouble that long, anyway. With me, it was always harder than it looked.

Starting a new school in the middle of the fall semester sucks.

I should know. I’ve done all this before. The struggle to find your locker, the curious stares in the hallway, the walk of shame to your desk in your new classroom, twenty or so pairs of eyes following you down the aisle.

Maybe third time’s the charm, I thought morosely, slumping into my seat, which, thankfully, was in the far corner. I felt the heat from two dozen stares on the top of my head and ignored them all. Maybe this time I can make it through a semester without getting expelled. One more year—just give me one more year and then I’m free. At least the teacher didn’t stand me up at the front of the room and introduce me to everyone; that would’ve been awkward. For the life of me, I couldn’t understand why they thought such humiliation was necessary. It was hard enough to fit in without having a spotlight turned on you the first day.

Not that I’d be doing any “fitting in. ”

I continued to feel curious glances directed at my corner, and I concentrated on not looking up, not making eye contact with anyone. I heard people whispering and hunched down even more, studying the cover of my English book.

Something landed on my desk: a half sheet of notebook paper, folded into a square. I didn’t look up, not wanting to know who’d lobbed it at me. Slipping it beneath the desk, I opened it in my lap and looked down.

U the guy who burned down his school? it read in messy handwriting.

Sighing, I crumpled the note in my fist. So they’d already heard the rumors. Perfect. Apparently, I’d been in the local paper: a juvenile thug who was seen fleeing the scene of the crime. But because no one had actually witnessed me setting the library on fire, I was able to avoid being sent to jail. Barely.